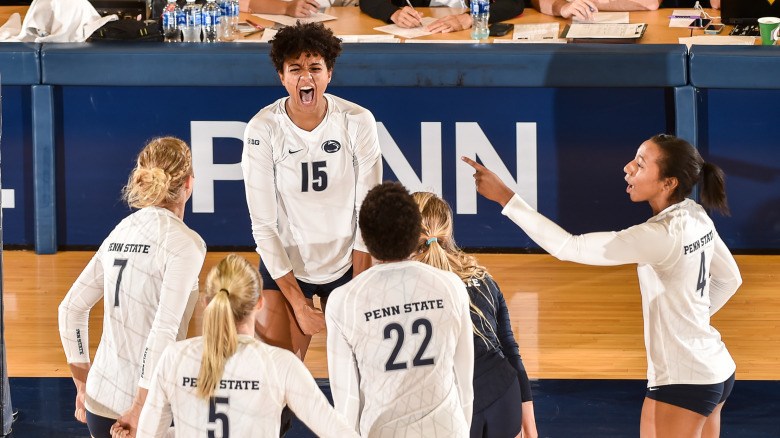 The third ranked Penn State women’s volleyball team heads to Champaign, Ill., for two matches this weekend as they will... Current Photo via Mark Selders

The third ranked Penn State women’s volleyball team heads to Champaign, Ill., for two matches this weekend as they will take on Colorado and No. 4 Stanford in the Big Ten/Pac-12 Challenge on the University of Illinois campus.

>> This weekend will be the second of two meetings with the Cardinal in eight days. Penn State holds an 11-9 advantage over Stanford after the Nittany Lions’ 3-1 victory in College Station, Texas, last weekend.  In the match, Stanford saw sophomore outside Kathryn Plummer go off for her career high with 27 kills, but PSU countered with a career performance from Abby Detering, with 11 kills, 23 assists, and 10 digs.

>> Last season, Colorado hosted the Big Ten/Pac-12 Challenge, and when the Nittany Lions met up with the Buffs, Colorado got the advantage, 3-2. Tori Gorrell had a career-high 14 kills in that match, and Simone Lee led the way with 19. Penn State led in kills, 60-55, but had 33 attacking errors including 12 service errors and Colorado held the .220 to .154 advantage in hitting percentage for the contest.

>> Abby Detering recorded her first career triple double against Stanford (9/1) with a career-high 11 kills, 23 assists, and 10 digs. Detering was named espnW National Player of the Week.

>>  After the second weekend of action, Penn State is No. 3 in the nation in hitting percentage at .368 as a team. Senior Haleigh Washington holds the top spot for the highest hitting percentage for an individual with a clip of 0.575.

>> At the WVU tournament, Haleigh Washington was named MVP, and Simone Lee was named to the All-Tournament team.

>> This is the 21st season under Coach Russ Rose that Penn State has started a season with a 5-0 record.

>> All six starters from the 2016 season and a total of 17 letter winners return to the court for Penn State. The Nittany Lions also welcome four newcomers.

>> Haleigh Washington added the 18th CoSIDA Academic All-America honor (third team, 2016) to Penn State’s list of accolades. She is the 12th Nittany Lion to be recognized nationally through the program for academic achievement. Washington earned second-team honors in 2015.

The Nittany Lions were led by dual-threat senior Abby Detering (Mentor, Ohio). Detering, who has been playing both right side and setter, finished the evening with her first career triple-double. Her 11 kills were a career-high while putting the ball away on a clip of .455. Detering also dished out a team-high 23 assists, while scooping up 10 digs to tally the triple-double.

Simone Lee put down 30 kills for just the second time in her career as she helped the Nittany Lions to a 3-2 win over Texas A&M in the Aggies’ home arena. Lee (Menomonee Falls, Wis.) found her offensive rhythm early against the Aggies and tallied 12 kills through the first two sets alone. The senior finished the match with 30 at a clip of .456. She was reliable through each set, providing offense both in the front row and with a thundering back row attack.

Senior Ali Frantti put down 11 kills on the opening weekend of action to become the 26th Nittany Lion with 1,000 career kills. Frantti is the first Penn State volleyball player to join the 1,000-kill ranks since Megan Courtney (2012-15). Frantti needs 17 kills to move into the Nittany Lion top-25 list for career kills.

Penn State moved up to No. 3 team in the nation with the AVCA Week Two Poll released Sept. 4.

Seniors Ali Frantti, Simone Lee and Haleigh Washington have been named to the 2017 Preseason Big Ten Volleyball Team. It’s the third time Frantti and Washington have earned the preseason honors and the first year for Lee to be included on the list.

Penn State will finally open up at Rec Hall on Friday, Sept. 15 as they take on Yale at 7:30 p.m. in the second match of the Penn State Classic. They will openSaturday with a 10 a.m. match against Wake Forest and will take on Ohio at 4 p.m. Single Match tickets are available now! Buy here:http://gopsu.info/vbsinglegametickets