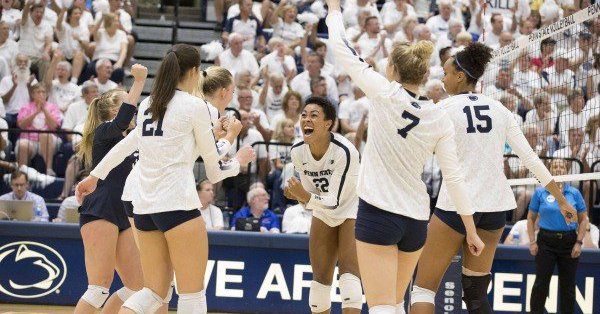 The No. 1 Penn State women’s volleyball team will host Maryland in a 7 p.m. ET match on Saturday evening in Big Ten Action.

PROMOTIONS
Fans coming from the 12 p.m. Penn State football game can bring their ticket to the ticket counter for the volleyball match, and get a $4 ticket for the match. Fans can also get $4 tickets by showing a video at the ticket sales window of their Bitmoji at any of the four locations from this week’s “Find Coach’s Bitmoji” promotion. Locations can be found on the Penn State women’s volleyball Twitter and Facebook pages!

PARKING & TRAFFIC
Women’s Volleyball fans will have free parking in the Nittany Parking Deck, as well as in the Red A lots off North Atherton Street at White Course Drive. The gates will be open at both the entrance and the exit to the Deck on Saturday night. The Rec Hall ticket office opens 1 ½ hours before all matches.

For other notes on traffic for Homecoming Weekend: READ

SCOUTING MARYLAND
The Maryland Terrapins have gone 16-11, 5-10 so far this season, but have proven that they have the ability to hang with the best of them. The Terps have quality wins over then-No. 18 USC, 3-0, and a 3-2 win over then-ranked No. 17 Purdue just two weeks ago. Gia Milana leads the team with 3.07 kills per set, adding 2.25 digs as a six rotation outside. Defensively, Kelsey Wicinski leads the team with 4.78 digs per set, which would be second in the conference, but due to injury, she missed a few matches. Erick Pritchard leads the Big Ten in aces at 0.44 per set.

FIRST SERVE
>> Kendall White picked up her 3rd Big Ten Defensive Player of the Week honor for averaging 4.89 digs per set in wins over #9 Michigan State and Rutgers.
>> White is now just the third Nittany Lions to be honored as the Defensive Player of the Week three times in a single season by the Big Ten league office. She joins Katie Slay and Kaleena Walters, who each recorded seasons with three or more honors. Slay, who finished with eight career honors, earned three in the 2012 season, and Walters earned all four of her career honors during the 2005 season.
>>Haleigh Washington became the 7th athlete in Penn State volleyball lore to reach 1,000 kills and 500 blocks on Oct. 25. She was the first in seven seasons to reach 500 blocks, as the last to achieve this feat was Arielle Wilson (2007-10). Washington is also currently the only active Big Ten player to reach this mark.
>> Haleigh Washington was named the FloVolleyball Big Ten Player of the Month on Friday morning for her sustained performance over the month of October. Since October 1, she has helped lead the Nittany Lions to victories over top-20-ranked Michigan State, Purdue, and Wisconsin. She also surpassed 1,000 career kills and 500 career blocks last month. Absolutely deadly on the slide, the 6-foot-3 First Team All-American has a .519 hitting percentage, the best average in the country. Her career hitting percentage ranks third all-time in NCAA Division I history. Against Ohio State on October 6, Washington set a new career high with 20 kills. That night, she also added eight blocks. In the month of October, Washington was named the Big Ten Player of the Week three times.
>> Penn State has three active 1,000 kill club members as Ali Frantti was the first on Aug. 26 at West Virginia, and Simone Lee followed on Oct. 6 at Ohio State, and Haleigh Washington eclipsed the mark on Oct. 21 at Indiana.
>> The last time Penn State had three active 1,000 kill club members was in 2008. Entering the season, Megan Hodge and Nicole Fawcett were already past the mark, but on Sept. 5, 2008, Christa Harmotto joined the club as well.
>> The marks the 70th week the Nittany Lions have been at No. 1 in the poll since the end of the 2006 season, and the 94th time in the history of the poll. The Nittany Lions’ first No. 1 Ranking came on Sept. 2, 1997, and the poll was started in 1982.
>> Penn State also remained No. 1 in the RPI that was released on Monday, Nov. 6.
>>Twice this season, the Nittany Lions have had four players with double-digit kills. Against Stanford (9/1): Abby Detering (11k), Ali Frantti (10k), Haleigh Washington (10k), and Simone Lee (11k), and against Purdue (10/20): Ali Frantti (15k), Heidi Thelen (14k), Simone Lee (13k), and Haleigh Washington (10k).

UP NEXT
The Nittany Lions host Indiana on Wednesday, Nov. 15 at 7:30 p.m. for the final home match of the regular season.