No. 16 Penn State Sweeps No. 22 Michigan to Stay Perfect in Big Ten 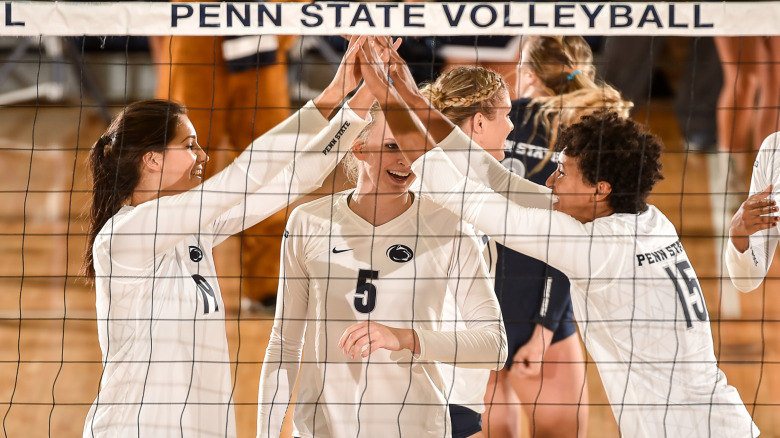 Penn State has swept nine of its last 10 opponents — including all four of its conference opponents (Michigan, Michigan State, Northwestern, Rutgers). Michigan was coming off a sweep of Rutgers on Friday and its first conference win last Saturday against Iowa.

Penn State will face Minnesota at home on Wednesday. Michigan will play Maryland at home on Friday.

A slew of Nittany Lions contributed on the offensive end as the team notched 47 kills in the match, tying its largest output in a three-set outing this season.

Opposite Heidi Thelen had six spikes on a team-high .667 hitting clip. Junior setter Abby Detering paced the offense to a .432 clip as a team while accounting for 35 of the team’s 44 assists. She added four kills of her own while notching 11 digs for her third double-double of the season.

The Nittany Lions take the floor again on Wednesday, Oct. 5, against the No. 2 Minnesota Golden Gophers. The match begins at 7 p.m. inside Rec Hall. Fans are encouraged to “White Out Rec Hall” and wear white in support of Penn State in Wednesday’s marquee matchup.

Penn State jumped ahead early in the first set and never looked back. After trailing 4-3 early, PSU made a 4-0 spurt on kills from Lee, Frantti and Gorrell to secure an 8-4 lead. Michigan called for a timeout. Penn State scored twice more before Michigan responded. Michigan pulled within two when an ace from defensive specialist Keeton Holcomb and a kill from Frantti sparked a 4-0 run to make it 13-8 for the Nittany Lions. Gorrell, Frantti, and Lee all knocked down kills in a 5-2 PSU run to open the gap to five at 19-14 when Michigan called its second timeout. Michigan pulled within three at 20-17, prompting a PSU timeout. The Blue and White responded, rattling off five of the final eight points, as a kill from Washington punctuated the first frame, finishing the set at 25-20.

The second was tightly contested early on. With four ties and three lead changes near the beginning, the teams went back and forth before a kill for Detering gave PSU an 18-15 advantage. Two plays later Gorrell slammed down a kill in the middle before Washington and Thelen combined for a block the next play to force a Michigan timeout at 20-16 in Penn State‘s favor. With a service error from Holcomb the Wolverines pulled within three at 22-19. Penn State called for time. Out of the break PSU took the final three points of the set, with a pair of Washington blocks powering the team to a 25-19, set two victory.

Much like the night prior, Penn State put together its best set of the night in the third. The team opened on a 5-1 tear, with a pair of aces from Washington and a kill from Detering forcing Michigan to call for time. Washington would spike the ball in the middle to make PSU the first to 10. Michigan pulled within three at 13-10 before another kill from Washington and her third ace of the set backed the Wolverines into calling time at 15-10. It seemed from there that for every point Michigan scored, Penn State scored twice. An ace from defensive specialist Lainy Pierce highlighted a 5-3 run for the Nittany Lions, bringing the score to 20-13. Michigan would only score twice more, as kills from Frantti and Washington closed out the match with a 25-15 set three win.

—Junior Abby Detering recorded her third double-double performance of the season dishing out 35 assists and 11 digs.

Series
—Penn State moves to 48-4 in the all-time series against Michigan and 26-1 in matches played at home in Rec Hall.

—Abby Detering, junior setter: Detering passed out 35 assists and matched her season-high of 11 digs, marking her third double-double performance of the season. She also added four kills on seven errorless swings to go along with two blocks.

—Tori Gorrell, redshirt freshman middle hitter: Gorrell helped lead the defense with five blocks for the seventh time of the season and finished second on the team posting nine blocks.

The loss is Michigan‘s second Big Ten Conference loss of the season and just the third loss of the year overall.

Michigan took the first point of the day on a Penn State service error and the two teams battled from there. Owning a 4-3 lead early on thanks to kills from Abby Cole, Ally Davis, and Cori Crocker, Michigan surrendered four-straight points to allow Penn State a 7-4 lead. Following the stoppage in play, the Wolverines battled, rattling off three-straight points including a long rally and a kill from Davis force a Penn State timeout at 20-17. Despite a .321 attack average by the Wolverines in the first set, it was the Nittany Lions who jumped out to a 25-20 set victory.

Peen State came out hot to begin the second set to take a 5-2 lead early on, but Michigan fought hard to come within one on eight separate occasions. After much point-for-point play, Penn State pulled away at 13-10 but never took more than a five point lead as kills from Cole, Davis, Adeja Lambert, and Claire Kieffer-Wright kept Michigan on pace. Though Michigan was steady for the majority of the set, the Nittany Lions pulled away at the end and took set three, 25-19.

A double-block from MacKenzi Welsh and Cole gave the Wolverines a 1-0 lead in the third set, but Penn State rallied for four-consecutive points to force a Michigan timeout. Use the momentum, the Nittany Lions surged ahead for a six-point lead, but kills from Welsh and Lambert allowed Michigan to come within three at 13-10. Despite a mid-set rally, Penn State used a .375 kill percentage to force a 25-15 third set victory.

Defensively, Cole and Welsh each recorded three block assists, while Crocker earned the only solo block of the day for the Wolverines. From the back row, seven players registered a dig, as sophomore libero Jenna Lerg led the Michigan with seven.

No. 22-ranked Michigan will return to action on Friday (Oct. 7) when it hosts Maryland in another Big Ten home contest. First serve is slated for 7 p.m. from the Wolverines‘ home court inside Cliff Keen Arena.