Pepperdine’s Frohling Tabbed as WCC Player of the Week 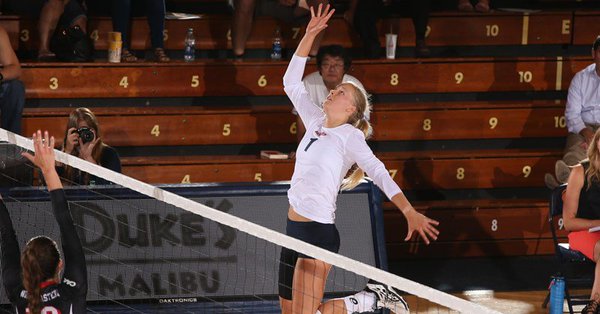 Frohling led Pepperdine to a pair of road wins to open West Coast Conference play this week, first sweeping a previously undefeated Portland before downing Gonzaga in four sets.  In seven sets played, she posted 4.79 points/set with 3.71 kills/set, 0.71 aces/set, 1.43 digs/set and 0.71 blocks/set for the Waves.  Overall, she put down 26 kills on a .393 success rate, along with five aces, 10 digs and five blocks for 33.5 points.

In the sweep at Portland, she hit for double-figure kills with 13 smashes.  With only two errors on 28 swings, she hit for a .393 output.  The outside hitter also posted two aces and four digs for 15.0 points.  Then in the 3-1 win at Gonzaga, she completely paralleled her attack effort with 13 kills and only two misses on 28 swings for a .393 hitting percentage.  In this match, however, she added five blocks, six digs, three aces and an assist.  She only had three service errors on 31 attempts for a .903 service percentage and on the back link she totaled only one errors with 25 reception attempts for a .960 success rate.

Frohling and the Waves host No. 1 BYU Tuesday, September 25 in Firestone Fieldhouse. First serve is at 6:00 p.m. PT in a match televised live on ESPNU and Watch ESPN.