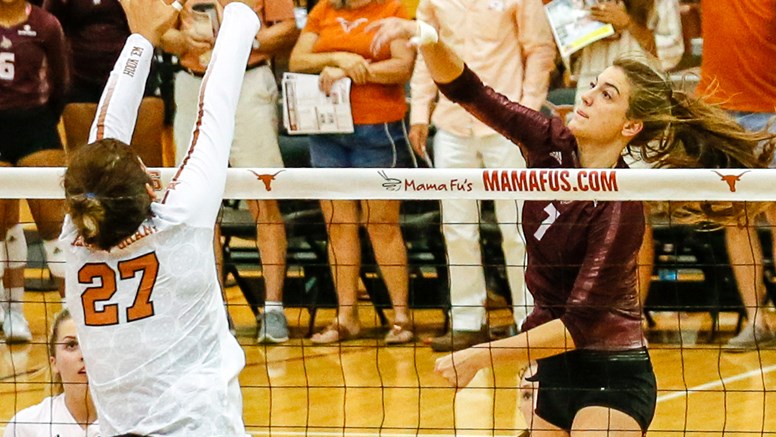 Amy Pflughaupt, Texas State (Sr., OH, El Campo, Texas)
Texas State senior outside hitter Amy Pflughaupt recorded 48 kills (4.00/set) and 25 digs (2.08/set) for the Bobcats against some of the stiffest competition in the country. Pflughaupt began the week with 18 kills and 15 digs in a five-set road win at Rice. Texas State also faced No. 6 Texas on the road and No. 16 Kentucky at home. In those two matches, Pflughaupt racked up 30 kills and just seven errors on 68 swings for a .338 hitting percentage. Texas State took the first set from the Wildcats, becoming the first Sun Belt team to win a set over a top-25 opponent this season.

Amy Pflughaupt of @TexasStateVBall earns @SunBelt Offensive Player of the Week — TXST is now the only Sun Belt school to have earned all four weekly awards so far this season! pic.twitter.com/p1rQqoTGSv

Veronica Marin, Little Rock (Sr., MB, Tulcea, Romania)
Little Rock senior middle blocker Veronica Marin posted 22 blocks over three matches, averaging 2.33 blocks per set, and tallied 28 kills and a .414 hitting percentage as the Trojans went 2-1 at the UCA Invitational. Marin racked up a double-double in the win over South Dakota with 10 blocks and 13 kills. She had eight blocks and seven kills against Central Arkansas. For her performances, Marin earned her second-straight All-Tournament Team honor.

After notching 2⃣2⃣ blocks in helping #LittleRocksTeam to a 2-1 mark over the weekend, Veronica Marin has been named the @SunBelt 🏐 Defensive Player of the Week!

Becky Porter, Appalachian State (Sr., S, Charlotte, N.C.)
Appalachian State senior setter Becky Porter recorded 128 assists (10.67/set) for the Mountaineers at the North Carolina State/Campbell Invitational. Porter dished out a career-high 62 assists, to go along with six kills, nine digs and three blocks in a five-set loss to Utah Valley. She followed that up with a double-double of 38 assists and 11 digs in 3-1 victory over Wright State. Porter concluded the tournament with 28 assists and eight digs in a sweep of Campbell.

Anett Nemeth, Coastal Carolina (Fr., OH, Pecel, Hungary)
Coastal Carolina freshman outside hitter Anett Nemeth had a total of 42 kills in three matches at the Duke Invitational. Nemeth opened the weekend with a double-double (21 kills and 16 digs) and a .259 hitting percentage. She was responsible for almost six points per set in the loss to East Tennessee State. In the tournament finale against Cincinnati, Nemeth picked up 13 more kills in the five-set loss to the Bearcats.

Congratulations to Anett Nemeth as was named Freshman of the Week for the second time this season! #GoChants👌#RiseAbove #SunBeltVB pic.twitter.com/TMvvkdE7qQ