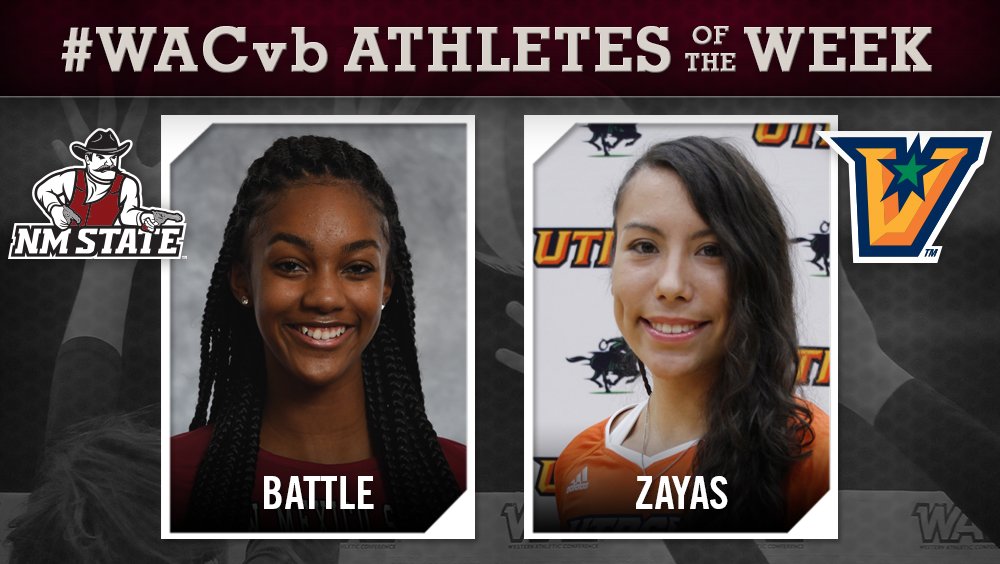 NM State senior outside hitter Tatyana Battle and UT Rio Grande Valley senior libero Gysell Zayas have been named the Western Athletic Conference Offensive and Defensive Volleyball Players of the Week, respectively, for the week of Sept. 3-9. This is the first WAC Player of the Week honor of the season and third of her career for Battle and the first-ever honor for Zayas.

Battle, an Albuquerque, N.M. native, averaged 3.47 points and 3.25 kills and was named MVP of the Borderland/Springhill Suites Invitational after playing in every set of every match including a pair of five-set victories, helping the Aggies to a 4-0 record last week. In the Aggies’ five-set victory over Montana, she posted a double-double with 16 kills and 12 digs. In handing Arizona its only loss of the season, Battle finished the match with 14 kills and eight digs, but held her composure when it mattered most, clinching match point with a kill off the Wildcat blockers. Against UTEP, the outside hitter led the team with 13 kills to go along with five digs, two assists, one block and a service ace.

Congrats to Tatyana Battle for being named the WAC Offensive Player of the Week!!https://t.co/zQilqpPcvf

Zayas, a San Antonio native, led the WAC with a 5.92 digs per set average last week. She opened the week with a season-high 28 digs in a four-set win over Incarnate Word last Tuesday, at one point diving into chairs to save a ball, immediately getting up and getting back into system. Over the weekend, she was named Best Defender at the Baylor Classic as she posted 17 digs in a three-set loss to Rice before tallying 26 digs in the Vaqueros’ historic five-set victory over the No. 15 Bears. She also added a season-high-tying four assists at Baylor.