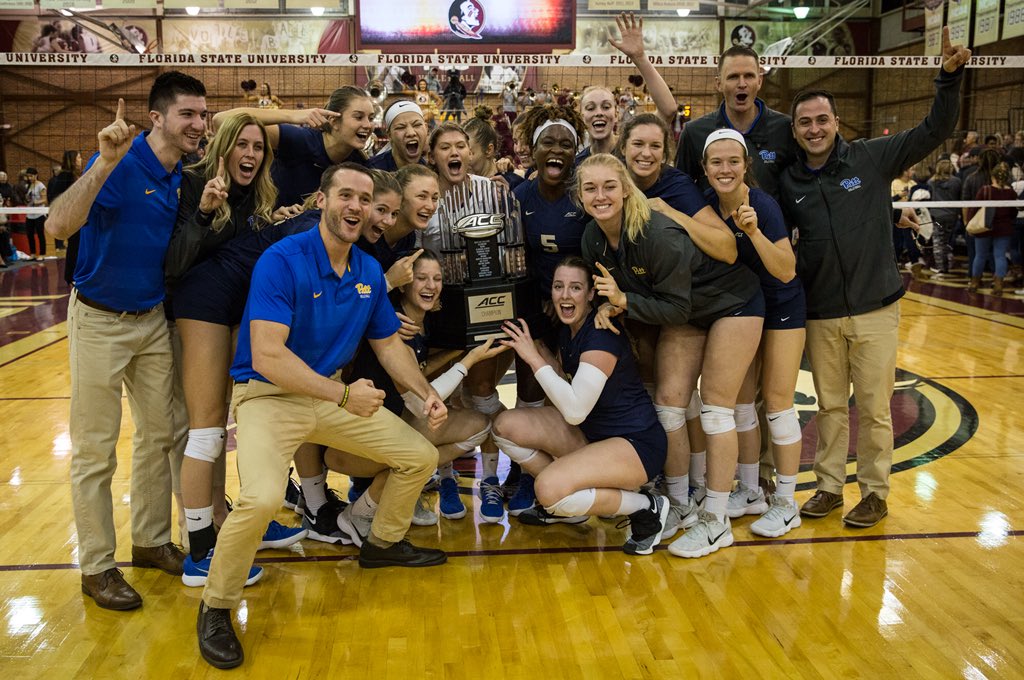 For the second consecutive season, the Pitt volleyball team (27-1, 15-1 ACC) clinched at least a share of the ACC Championship with a 3-1 win at Florida State (17-9, 13-3 ACC) Friday night at Tully Gym. Current Photo via Pittsburgh Athletics

The win marks the second ACC title for the program, after earning its first as co-champion with Louisville in 2017. A win for Pitt at Miami Sunday would secure the 2018 title outright for the Panthers.

The Panthers earned an automatic bid to the 2018 NCAA Tournament, marking its third consecutive appearance and 16th overall.

Junior right side Nika Markovic led the Panthers with a match-high 18 kills on .256 hitting. She had a double-double with 14 digs and added five blocks and two assists.

Sophomore outside Kayla Lund recorded her team-high 12th double-double of the year with 13 kills and 13 digs. The Panthers’ middles, sophomore Chinaza Ndee and junior Layne Van Buskirk, each posted 10 kills.

Pitt had six blocks in the first set and hit .317 compared to Florida State’s .116. Lund led the Panthers with five kills.

The Panthers hit .286 in the frame, its best percentage of the match.

No. 10 Pitt will play its final regular season road match at Miami Sunday at 1 p.m. The match will be streamed live on ACC Network Extra, available via the WatchESPN app.

TALLAHASSEE, Fla. –  The Florida State volleyball team (17-9, 13-3 ACC) fell to No. 10 Pitt (27-1, 15-1 ACC) on Friday night, taking a set off the Panthers in a close four-set decision. With the win, Pitt claimed a share of the ACC Championship title for the second year in a row. Florida State now drops to a tie with Syracuse for second place in the conference.

If Florida State wins both of its next two matches and Pitt loses its next two, FSU will share the title with the Panthers.

Florida State saw 14 total blocks in the match to hold Pitt to just .195 hitting, the lowest the Panthers have seen since hitting .188 against Louisville earlier this season. While the Seminoles’ defense at the net stayed strong, it wasn’t enough to hold off Pitt’s top-ranked offense, as the Panthers put down 60 kills to stay ahead of Florida State.

The Seminoles recognized the team’s four seniors after the match after all four of them made an impact in their final game in Tully Gym. Senior setter Brianne Burkert saw 21 assists and seven digs, while redshirt senior Christina Ambrose put down six kills, an ace, four digs and two blocks in the match. The team’s two transfers, Ashley Murray (seven kills, three blocks) and Kelsey Wicinski (20 digs, four assists) added to the team’s four-set effort against the Panthers.

Florida State will close out the regular season on the road, facing North Carolina and NC State before finding out the team’s postseason fate on Sunday, Nov. 25.

While the Seminoles kept up with the Panthers, and even held the lead in the beginning of the set, Pitt held an advantage throughout the opening set with a more consistent offensive presence. Florida State took more swings at the ball, but Pitt’s defense held the Seminoles back from scoring, using seven blocks and letting the Seminoles make two unforced errors to keep their hitting percentage down.

FSU came within only a point of the Panthers at Pitt’s 19-18 and 23-22 leads, but a consistent offense on Pitt’s side helped them close out the first for a 1-0 lead in the match.

Pitt started out with the advantage in the set once again, but the set saw five tied scores before FSU took its first lead at 10-9 with a 4-0 scoring run. Both teams went back and forth from there, but Florida State saw its last lead at the 13-12 mark before the Panthers regained the lead at 15-14 and held on to it until the end.

While Florida State saw an improved hitting percentage in the set and kept up with Pitt on defense, it wasn’t enough to slow the Panthers as they put down 18 kills in the set. Caffrey led the Seminoles’ offense with five kills on 13 attacks, while Knuth hit 1.000 with two kills and three blocks.

With a 4-0 run to start the set, the Seminoles secured the lead from the beginning. Florida State let Pitt make its own errors, and capitalized on their inconsistencies with a stronger offensive presence and six blocks in the set. Caffrey saw her hitting percentage improve as she was able to put down three kills early on in the set, and the Seminoles were able to gain as much as a 10-point lead over Pitt.

The Panthers’ offense began to click towards the end of the set, and a stronger effort at the net held Florida State back from running away with it. After FSU led at the 21-11 mark, the Panthers went 9-4 to close the Seminoles’ lead before a kill from Murray ended the set.

Pitt started off strong in the fourth set, going up 10-0 before Florida State was able to score on a kill from Knuth. The Panthers held the lead with a tough offense, but a more consistent back row on FSU’s side set up the offense to make more plays, putting down 10 kills in the set.

While FSU was able to battle back to slow Pitt’s run and close the gap to as little as three points, it wasn’t enough keep Pitt’s tough offense down. The Panthers saw their best hitting percentage in the fourth set, closing it out with the first kill of the night from Williams to take the match.