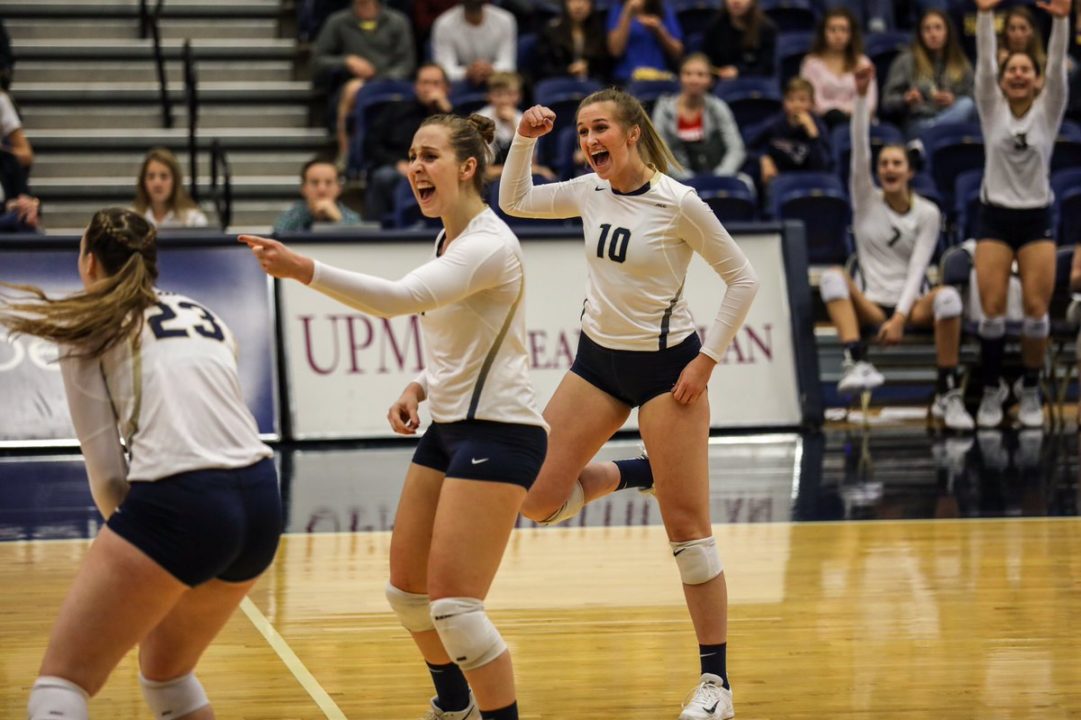 PITTSBURGH, Pa. – Florida State outblocked Pittsburgh 15-9, but couldn’t get its offense going, hitting .010 for the match, falling to the Panthers via sweep on Sunday.

Senior outside Natasha Calkins mustered seven kills to pace Florida State, but had little help. Freshman middle Taryn Knuth was next on the team with four putaways, while also turning in a team-high nine blocks. Sophomore outside Bozena Culo pulled up seven digs.

The teams tied eight times in the early phases of Set 1, with the last coming at 12-all, before Pitt pulled away with a 3-0 run, including an ace by Williams. The Seminoles stayed close, cutting the margin to one five times, last at 20-19, but couldn’t stop the Panthers down the stretch. Pittsburgh scored five of the final eight points, with a Markovic kill setting up a final putaway by Ndee at 25-22.

A 5-0 midset run gave Pitt cushion in Set 2, snapping an 11-all tie. Ndee, Markovic and Williams provided offense while Williams capped the rally with an ace. FSU chipped away, eventually tying the score at 20. Four Panther miscues and two stuffs by Natasha Calkins helped erase the five-point deficit. Pitt came through in the end, wrapping up the win with five straight points, three on Williams kills.

Three Markovic kills and two by Van Buskirk put Pittsburgh up 10-5 in Set 3. The Seminoles were within three at 11-8 and 12-9, but could not break through. The Panthers pulled away with nine of the next 13 as Williams, Markovic and VanBuskirk turned in two kills apiece to make it 21-13. Florida State fought back with a 5-2 run of its own, as Kubura notched two blocks and a kill to bring the Seminoles within five at 23-18.  A Markovic kill and FSU hitting error ended the match.

The Seminoles return to Tully next weekend to close out its home slate, hosting Syracuse on Friday, Nov. 10 and Boston College for Senior Day on Sunday, Nov. 12. Sunday’s match against the Eagles will stream live on ACC Network Extra.

Florida State stayed close with the Panthers throughout the opening set,

While the Seminoles were able to go on a run to get within a point of the Panthers at 19-20, errors on the Florida State side helped the Panthers gain the lead, and tough offense from Pitt helped it close out the set.

The Panthers began swinging harder in the second set, but the Seminoles were able to stay consistent and let Pitt make the errors to keep the set tight. While Pitt stayed ahead throughout the set, Florida State was able to tie it up four times, with the last tie score coming at 20-20.

From there Pitt was able to control the score, finishing out the set with four kills and a block to take a 2-0 lead in the match.

The Seminoles stayed consistent on both offense and defense in the beginning of the third set, but Pitt was still able to gain the lead early on. The Seminoles fired off 33 total attacks once again in the set, but struggled to put the ball down as many times as the Panthers.

FSU was unable to catch up, and consistent offense from the Panthers helped it close out the set to take the match.

Florida State returns home for its final weekend in Tully for the 2017 regular season. The Seminoles will host Syracuse on Friday, Nov. 10 at 6:30 pm and Boston College for Senior Day on Sunday, Nov. 12 at 1:00 pm. Sunday’s match against Boston College will stream live on ACC Network Extra.