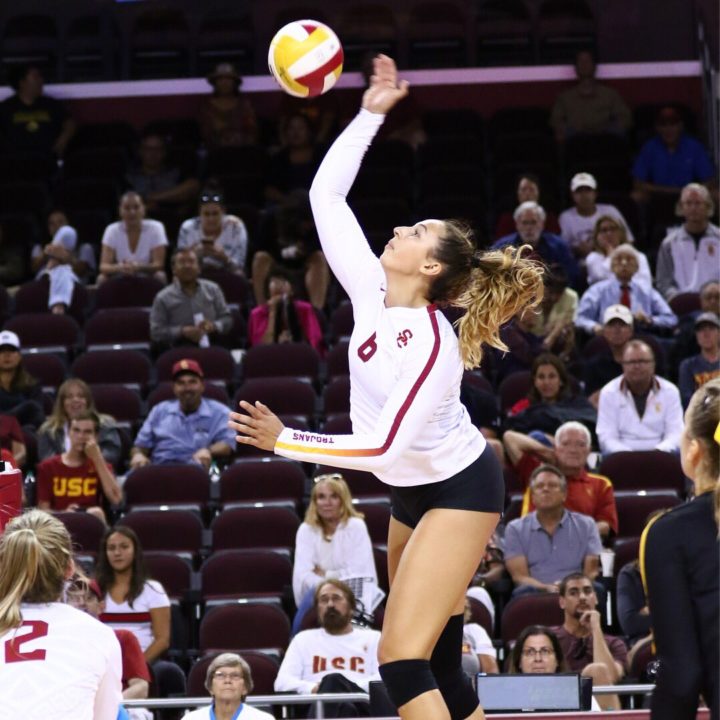 USC looked like a well-oiled machine as they opened up play 3-0 against a trio of ranked opponents. Archive Photo via Jon Michael Kondrath/USC Volleyball

The first week is in the books. We have a much better idea of certain teams while others still are awaiting a true first test. Some of those will be entertained this week, but for now here’s some of the highlights for what we learned on week one.

Note: We already discussed some teams in our opening night notebook. It’s also impossible to get to every match and every team for the sake of you not getting bored on this page or my fingers falling off from typing, so we try to cut it down a bit.

Texas and USC are the real deal:

To be frank, this could also be said about a team like Florida from the first week and a few others, but we had previously talked about the Gators. Texas and USC both showed out and went unbeaten in high-level tournaments.

Everyone knows that Texas has all of the front row attackers, physicality and net presence that you could want. It’s been like that for quite some time down in Austin now. The difference last year – and from a big picture, ‘falling off’ in the Elite Eight doesn’t seem like a big deal, but for one with title aspirations it’s a constant striving to finish as the best – was the passing and defense.

It’s only two matches, but both came against top 20 opponents and both looked a lot better. Not to mention, their freshmen crop looks legit to pair with returners such as Micaya White. Some of those freshmen – like Brionne Butler and Logan Eggleston – were expected, while others like Katarina Luketic came in with hype, but flew under the radar a bit compared to the others. They’ll need setter Ashley Shook to perform more consistently and improve, but as long as that passing and serving has gotten better, the Longhorns are as legit as they come.

In terms of USC, the Trojans knew Khalia Lanier would star for them this season. After a late surge from Brooke Botkin in 2017, there was hope for that as well from her but it was still a bit of a question. That question was answered, as Botkin actually led the team with 4.33 kills per set and hit .248 in doing so.

The Trojans looked like a well-oiled machine overall. Not only did they have those two leading the way, but their two prized All-WCC transfers, Emily Baptista (3.63 points per set) and Jasmine Gross (1.33 blocks per set) were immediate hits. They’ll need to be more consistent passing if they want to threaten Stanford in the Pac-12, but the pieces are there to make it happen for what is a clear top 10 and nearing on top 5 type of team at the moment.

Northern Iowa is back at it again:

The Panthers new nickname is Jack, because they have been an absolute giant slayer – okay, I promise no more cruddy movie references. To begin 2018, they did fall to USC, but took down Kentucky by not letting seemingly anything hit the floor and swept Creighton in their opener.

Last season they took down Missouri, USC, Iowa State and Nebraska – plus Louisville if you count the NCAA Tournament. Of that first group of teams, three made the Sweet 16 or later. They have most of their pieces returning from last season’s successful run, but had to replace a key one at the setter position. They seem to have found their replacement for Heather Hook in Rachel Koop, a redshirt junior who notched 11.27 assists per set in the opening weekend.

For all of those who see Northern Iowa ahead in the non-conference, looking at you Iowa State, Washington State, Illinois and Creighton again, BEWARE.

Colorado State has some company atop the Mountain West:

First of all, the Rams showed out well in the first week. Yes, they did lose at home, but it came in five sets to 11th ranked Illinois. Beyond that, they’ve been a mainstay atop the Mountain West and last season ran away with the league.

It appears as if the competition will be more stern in 2018. The team that finished second in 2017 – but five matches back – had quite the weekend; that team is Wyoming. They not only went 3-0, but also took down #15 Colorado in the process. Early on, the Cowgirls are hitting .330 and holding their opposition to a .108 mark. The latter was more about the first two matches, but the offense looks legit with tons of balance (five players at two or more kills per set).

Whether it means Wyoming can knock off Colorado State or just contend tightly with them, this is great news for the league. Both look like potential NCAA Tournament teams, and now if they can tack onto their non-conference could give a run for one of the last few hosting spots in said tournament.