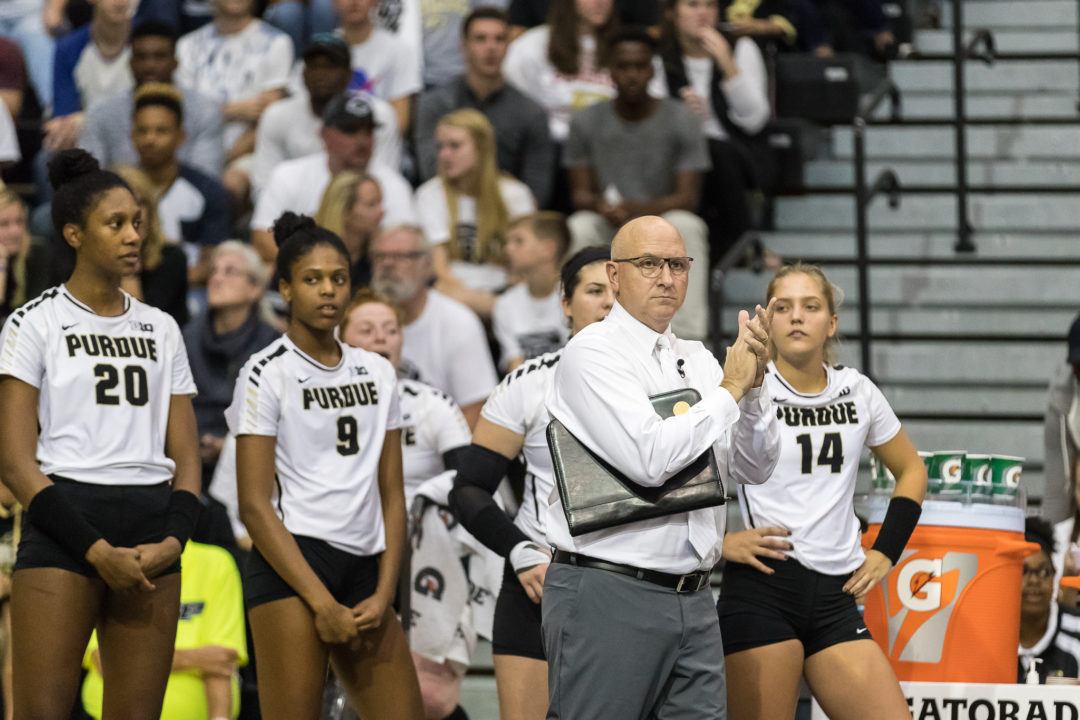 Purdue head volleyball coach Dave Shondell has signed a 6-year contract extension that will keep him in West Lafayette through the... Archive Photo via Purdue Athletics

Purdue head volleyball coach Dave Shondell has signed a 6-year contract extension that will keep him in West Lafayette through the 2022 season. The extension comes as the Boilermakers start their 15th season with Shondell as head coach – he and his brother John Shondell, his associate head coach, and assistant coach Kathy Jewell, all came to Purdue together in the spring of 2016.

Purdue opened last season ranked 20th in the AVCA pre-season coaches’ poll, and remained in the top 25 for the first 9 weeks of the season – including a peak of #1 on September 19th. That included a 3-1 win, in Palo Alto, over the eventual national champion Stanford Cardinal.

The team slumped as Big Ten play began, however, and they lost 6 of their first 7 conference games. That left them out of the top 25 though they still qualified for the NCAA tournament. In the opening round, they beat Iowa State 3-0 before falling to 15-seed Missouri in the 2nd round 3-1. The Boilers finished the season 19-14 overall with an 8-12 record in conference play.

Terms of the new deal were not announced, but for the 2016 fiscal year, Dave Shondell‘s total compensation was $231,086.04 per public records. That made him the 4th-highest-paid head coach at Purdue, behind men’s basketball coach Matt Painter ($2.3 million), former head football coach Darrell Hazell ($2.2 million), and women’s basketball head coach Sharon Versyp ($710,116.48).

WEST LAFAYETTE, Ind. – Purdue and head volleyball coach Dave Shondell have agreed on a six-year contract extension through the 2022 season. The agreement comes just before Shondell and his assistant coaches begin their 15th season together leading the Boilermaker volleyball program.

“Over the course of the last 14 years, Dave and his staff have done an exceptional of recruiting some of the finest volleyball student-athletes in the country and positioning them for success on the court, in the classroom and in life following graduation,” Purdue athletics director Mike Bobinski said. “We believe that we have the opportunity at Purdue to ascend into the upper tier of volleyball programs in the nation, and we look forward to supporting Dave in that effort.”

No volleyball staff in the nation has been together 15 years at the same university, and few have enjoyed more success than the Boilermakers over that time. Dave Shondell, John Shondell and Kathy Jewell have led Purdue to a 301-165 overall record, including a 181-127 mark against Big Ten Conference opponents. Together, they resurrected a program that enjoyed tremendous success under Hall of Fame coach Carol Dewey, but in the 14 years prior to their arrival had struggled with a 174-251 overall record and an 89-187 mark in conference play. In the 14 seasons before the Shondell era, Purdue had just one winning season in the Big Ten. Since, the Boilermakers have 10 winning seasons against conference opponents, with nine 20-win campaigns and 49 victories over top 25 foes.

“It is no secret that I am thrilled to be the head volleyball coach at Purdue University,” Dave Shondell said. “Born and raised in the Boilermaker state, it is an honor to lead a program that has earned respect across the nation. To be offered a contract of this manner by Mike Bobinski is very rewarding. I thank him and our sport administrator, Calvin Williams, for their support.

“I am grateful to every player who has competed for Purdue volleyball during my stay. The student-athlete is why I am here, and our team has enjoyed so many determined and talented players. I have been fortunate to work with outstanding coaches during my tenure at Purdue, and I thank John and Kathy for their loyal efforts. Every day is a challenge in the Big Ten, but I believe the future is exciting for Purdue volleyball. I am extremely appreciative of the opportunity to continue my coaching career at Purdue for many years to come.”

Competing against the toughest competition in the nation year-in and year-out, Purdue has made 11 NCAA Tournament appearances under Shondell and has always made it to the second round or beyond, including seven visits to the Sweet 16 and two to the Elite Eight. Altogether, Shondell and his staff have earned a 20-11 record in the NCAA Tournament. The program’s success has led to Holloway Gymnasium becoming one of the greatest volleyball arenas in the nation, with its attendance numbers consistently ranking in the top 10 nationally. Shondell also has embraced the university’s rivalry with Indiana, defeating the Hoosiers in 25 of their 28 meetings.

In order to succeed at the highest level, the staff has recruited and developed some of the greatest volleyball student-athletes in the nation who also have thrived in the academically challenging curriculum Purdue provides. The 2012 Big Ten Coach of the Year has guided student-athletes to 15 All-America and eight Academic All-America honors to go along with 24 All-Big Ten honorees and 89 Academic All-Big Ten accolades. Academically, Purdue has maintained the highest of academic standards as one-of-three volleyball programs in the nation, and the only Power 5 volleyball program, with a perfect NCAA Academic Progress Rate since its inception 11 years ago.

Athletically, former student-athletes such as Annie Drews, Val Nichol and Ariel Turner have competed at the highest level professionally following graduation, either overseas or with Team USA. Drews recently led her club team in Puerto Rico to a national championship and soon after led USA to its 16th gold medal in the Pan Am Cup. She then was selected to Team USA and led the Americans in the world’s most prestigious volleyball tournament aside from the Olympics, the FIVB World Grand Prix Final Six. Nichol has led her club team in Germany to two championships and one silver medal while Turner has led her club team to a championship as well.

Shondell and his staff begin the 2017 season this weekend with the annual Mortar Board Premier on Belin Court at Holloway Gymnasium. On Friday, the Boilermakers play Oral Roberts at 10 a.m. ET and Cleveland State at 7:30 p.m. They square off with Alabama at 3 p.m. Saturday.