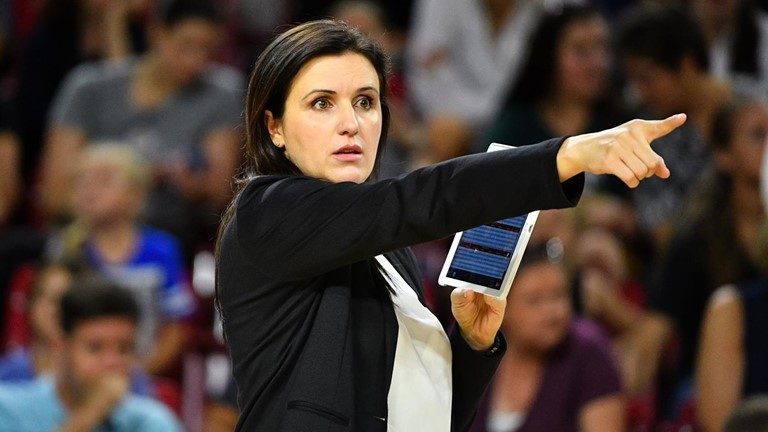 Sanja Tomasevic has a plethora of experiences to offer Arizona State in her first season as head coach for the Sun Devils.

Originally from Serbia, Tomasevic was a two-time All-American and the 2005 Asics National Player of the Year the the University of Washington. Tomasevic helped lead the Huskies to two Pac-10 titles, four NCAA tournament berths and the 2005 National Championship. In 2016, she became the second individual volleyball player to be inducted into the Husky Hall of Fame.

Professionally, Tomasevic played eight years in Europe, including her final two seasons as co-captain of POMI Cassalmaggiore in Italy.

Following her professional playing career, Tomasevic spent two seasons with Texas-San Antonio (UTSA) as an assistant coach and recruiting coordinator. Following UTSA, she spent two season with the University of Miami where she helped lead the Hurricanes to two consecutive NCAA Tournament appearances. In 2016, Tomasevic was an assistant coach with Arizona State and recruiting coordinator for the team.

The school was able to sit down with Tomasevic for a Q&A.

What are your expectations for Year 1 as a head coach?

Tomasevic: “Build the right kind of culture! I hope we are going to be able to establish a championship culture here. We want kids with the mentality of a champion, and love and desire for their improvement and this game. Our girls are very involved in deciding who we want to be and making it all happen. We want the players to improve and have fun while doing it. Improvement is addictive and it’s so much fun if done the right way.”

Is it at all intimidating to be a first-time head coach?

Tomasevic: “Honestly, I’ve had no time to sit and think about it. Since the hire, I have been working a lot and getting advice from many successful, smart, coaches and mentors about what to do and how to prioritize. I guess it is intimidating but I am not scared yet, and I ultimately feel pretty good having the support of some of the best in the game.”

How did your professional career in Europe enhance your understanding of the game and why did it lead you into coaching?

Tomasevic: “I was blessed to have some unbelievable people play not just the role of a coach but a surrogate parent to me since I was 16 years old. Those people have helped me become who I am today and inspired me to fill a similar role for the girls I coach. I couldn’t imagine my life without volleyball and I want to invoke that passion in the girls that I coach. I want to help these young girls have an unbelievable experience playing in college and teach them not only how to play volleyball but how to become good people and confident young women that are ready to handle anything that comes their way.”

As an assistant here last year, you knew it was going to be a rebuilding year with so many players lost to graduation. What were the greatest challenges with a remade roster and how did the players respond as the season progressed?

Tomasevic: “With recruiting starting so early and not too many transfers available last year, we were very happy with the team that we were able to assemble in the spring. I think the girls learned how to play together and eliminate all the distractions towards the end of the season. We finished 2016 with three good wins at home and I am excited to build on that.”

Were you introduced to volleyball in Serbia? If so, how does Serbia’s volleyball culture and structure differ from the United States’?

Tomasevic: “Yes, I started playing volleyball in my small town of Prijepolje, Serbia. Sports are unique in that they have the ability to bring together humans regardless of their respective origins. It amazes me how something as simple as a love for the game can unite so many people. The structure of the sport is very different in Serbia but the passion for it is the same. The main difference is that our kids don’t have high school sports offered to them so they play club volleyball from August until June. They practice five times a week and play one game a week while American kids practice two to three times a week and play 10 to 12 matches or so, in one weekend during the club season. I think Serbian kids have a better understanding of the game when they enter college just because they have been exposed to the game and training for a longer period of time. It would be amazing to see how good American kids would be if they had the same training system.”

What convinced you to leave Serbia and play at the University of Washington?

Tomasevic: “[Former coach] Jim [McLaughlin]’s vision for the program and the idea of creating something special. Also, it helped that they already recruited another Serbian girl, Danka Danicic, on the team. My English was bad and I was excited to have someone to help me get around.”

What did you gain from that experience on a national powerhouse that can serve you in coaching?

Tomasevic: “Rome is not built overnight! The biggest gift from that whole experience wasn’t winning the [2005] national championship (the Huskies did), but simply being a part of building something special. We were involved in building the culture at Washington and that took time, tears, tough conversations with coaches and teammates, understanding of one another and accepting one another. Good culture based on honesty and clear and open communication, with the right system and beliefs can provide sustainability and sets a precedent over time. Washington volleyball has been a prime example of that since 2003.”

Are there particular people you would cite as major influences and if so, why?

Tomasevic: “The list of great people and coaches that have influenced my life is very long but if I have to pick out a few. One would certainly have to be Ferid Mezildzic. He is the guy who gave me my first chance to play the game at 9 years old, and was someone who loved kids and loved the game. He taught me so many life lessons through the game of volleyball. Goran Nesic is another guy who was my coach in Serbia and who is a great role model for me until this day. I, of course, have to mention Jim McLaughlin. He brought me over from Serbia and helped me get a degree and become the best player I could be, which opened lots of doors for me in the pro world and life.”

You have two international student-athletes on your roster. Are there untapped recruiting opportunities in Europe, do you plan to explore them and if so, do you think your relationships from your playing days will help?

“My goal is to provide the opportunity to play at ASU to not only kids residing in the United State, but to international players. I kept in touch with many of my teammates and coaches all over the world and have been getting calls and interest from the kids that ask them for advice. At the end of the day, we will bring the best kids that we can to ASU, and we want those kids to get an education at our amazing university and help us win games and championships.”

You mentioned the amount of talent that exists within Arizona in a previous interview. Do you intend to make greater efforts at recruiting homegrown talent?

Tomasevic: “Absolutely, I’ve said over and over again, we have to make sure Arizona kids stay in Arizona. My staff and I will work relentlessly to show these kids and parents why winning games and building championship programs is so much more fun when you do it in front of your home crowd. During my Washington years, that’s one thing that I always longed for: that is my family and friends being there to see it all happen. That would have made it so much more special.”

What are the strengths of the current roster, and also some areas where you need improvement?

Tomasevic: “We have a pretty solid back row crew, and I am so glad they all stayed and excited to help them get even better. [Freshmen] Oly [Oluoma] and Iva [Jeremic] are staying and both are unbelievable athletes that will help lead this team next season. Nicole [Peterson] has yet to show everyone what she is capable of. I can’t wait for her to go through her first spring training with a setting coach and for her to utilize that next season while running our team offense. We need to get more pin hitters and middle blockers on our roster. It will be fun spring trying to find players that perfectly fit for our team.”