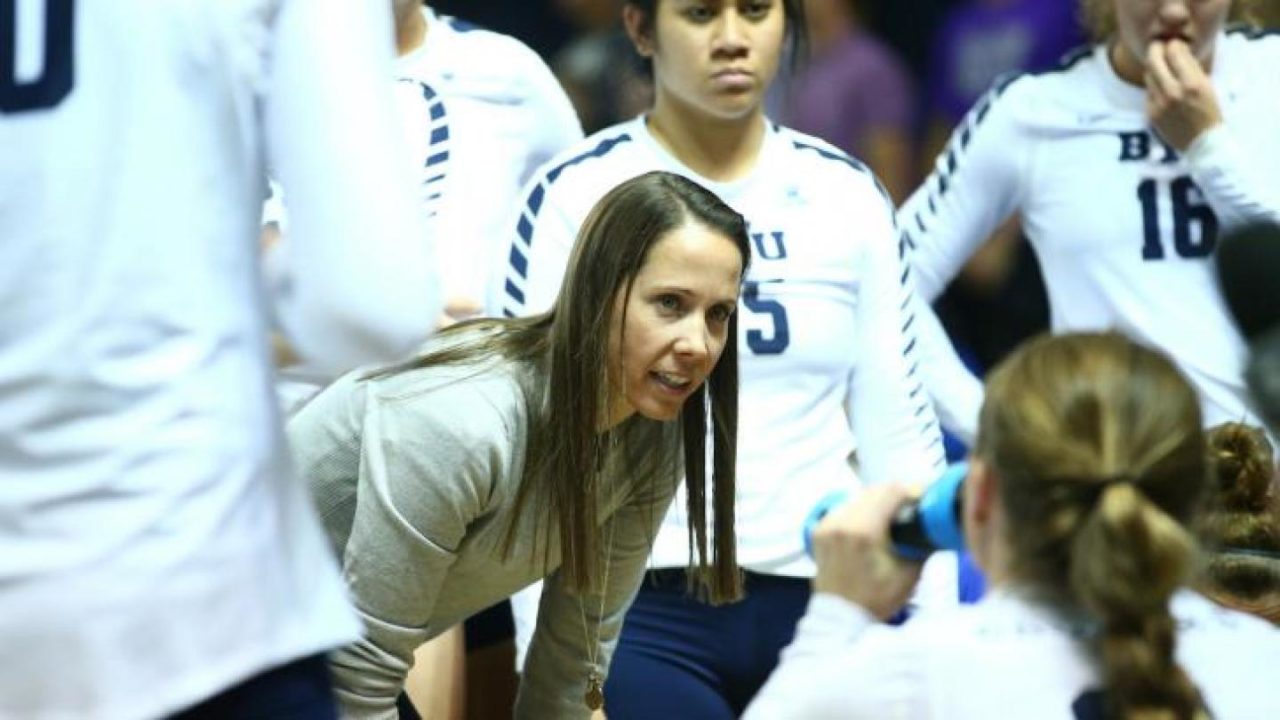 The summer is blowing by and we are just five weeks away from the Monday of the first week of the 2018 Women’s NCAA Division I season (with matches starting later in that week). To countdown the final five weeks, we will be previewing each of the top five teams in our Way-Too-Early 2018 VolleyMob Top 25 Power Rankings. To kick things off with a handful of weeks left, we talk with Heather Olmstead, the head coach of the team that correlates to being ranked fifth: BYU.

Q: The last two seasons you went on the road in the Sweet 16 against a higher seed and took them to five sets but just came up short. Knowing how close you were but also feeling that tough ending, do those past experiences serve as motivation for 2018?

A: Yeah absolutely. We’ve got some seasoned seniors on our roster that have been there done that; they’ve been to three straight Sweet 16s and had match point in that Texas match. That experience is definitely going to serve them well, but the biggest thing it taught us, losing three years in a row, is that we’ve got to get better. There’s no better indicator of what you need to do than whether you can win or lose those matches to move on. That’s what we’re working towards is to develop our skills and keep getting better so we can get past the Sweet 16, but just getting there in it of itself is such a huge accomplishment. We’re definitely looking to build on that and we want to win a National Championship.

Q: How impactful was the loss of Cosy Burnett?

A: Cosy was an unbelievable leader for us; fifth year senior, had been through the ringer as far as injuries, playing, not playing. And then obviously her senior year switching positions and doing whatever we asked of her, she was there for us. Stepping into the middle and filling that void that we needed her to, leading our team in blocks and the things she did and she was also our emotional leader. She was the Energizer Bunny. We’re probably going to have to adjust – we have in the spring – to life without Cosy but we’ve got kids waiting to step up and fill that role.

Q: Veronica Jones-Perry is going to be a legit First-Team All-American candidate. What makes her such a legit presence for your team?

A: Especially last year, her junior year, it was so nice to see her be that steady consistent player. She’s really developed her overall game being able to play six rotations. Not coming off the court for us was such a calming presence. She’s got a big arm, she jumps well with a big arm and she’s able to carry that heavy load for us; When we need a kill we know she’s going to deliver.

She’s looking to head into her senior year hungry to keep getting better and keep developing. She’s more of a quiet leader, she’s more of a lead-by-example. She’s our grinder, she’s our get out and get work in and leave and we love her for that.

Q: Kennedy Redding showed a lot of positives as a freshman in 2017. How’s her improvement headed into year two?

A: [Kennedy]’s just got a knack for blocking and its gotten better. She’s also improving her ability to score and we like where she’s at as a redshirt sophomore. She’s going to be able to take a little more of a load offensively – I don’t know that we’ll ask her to a ton as her job is to patrol the net and block balls and get kills where she can. She also has a great energy and personality on the court; she’s fun to play with and the girls love playing with her.

Q: Who are some others we should keep an eye on that look to have made a big jump in the offseason?

A: Taylen [Ballard] finished the year with an injury so we’re looking to see her be healthy this year. We’re not sure where she’ll be come the beginning of the season but we’re looking for her to add to our team somewhere as long as she’s healthy and ready to go. We’re anxious to get her back out there.

We’ve got a freshman middle blocker, Heather Gneiting, that’s a very good talent: great size, great athleticism, great arm, good blocker. She will look to step in to fill that middle blocker role as well as Whitney McEwan, who’s another freshman who has a chance to come in and play. Heather graduated early so she’s been with us since January so she’s got a little bit of a head start on some of the other freshmen.

And then we’ve got a J.C. transfer, Riley Lyman from Snow, who was an All-American at Snow College looking to come in and fight for a spot on a pin. She’s a great six-rotation player so she can play in the back row as well.

Q: How important is it to return your libero, Mary Lake, and your setter, Lyndie Haddock, in terms of already having chemistry with the passing and setting so that you can get those balls to your dynamic hitters and middles?

A: It’s pretty cool when you can return your libero who’s gonna be a junior and your setter as a senior who have experienced two seasons together. Mary stabilizes us in the back-court and she’s a calming presence back there passing and defensively. She’s also our energizer. She brings energy everywhere we go and she’s able to bring it home and on the road – it’s very critical for our team.

Lyndie has done a great job starting and we look for her to continue to build on what she’s already done setting our offense and getting our hitters in rhythm, making good decisions and knowing who to set and when. I think she’s poised to have a great year and she’s ready to take on more leadership as well on and off the court.

Q: Are those [setter and libero] two of the most important positions when you’re going on the road and trying to battle against the opponent and environment?

A: Absolutely. Mary is huge for our serve receive and being able to anchor that, lead, talk and communicate and calm people down. And then you’ve got Lyndie running the offense. Both are great servers as well and they do a good job there scoring points for us.

Lyndie’s not so much of a talker, she’s more of a competitive, fiery setter. She’s going to lead by example but she’s becoming more of a vocal leader which I’m really pleased with.

Q: It’s interesting when teams add Junior College All-Americans to their roster. A lot of times they go in to fill immediate holes but with you returning so much you don’t have that. You do still welcome on a top-level talent in Riley Lyman though, so what are your expectations for her?

A: I love getting competition in our gym. She knows she’s going to have a chance to come in here and compete and if she has that great pre-season – she’s gonna have chance to push people – we feel like we have a spot open on the opposite, so she could possibly grab that spot. She knows she’s going to push some kids and we’re going to play the best kids and our job is to put the best players out there that we think can help us win and she’s gonna be in that mix for sure. She’s got some valuable experience from Snow and she played at Idaho State. She’s been to quite a few places and knows what it takes so we’re excited to add her.

The other person that’s possibly an option for the opposite is Sara Hamson, who played quite a bit for us last year.

Q: Are there any other newcomers that we should keep an eye on?

A: We have freshman Madi Robinson – she’s from Lone Peak High School. She’s got a big arm and a big jump, so her upside is really big for us. She’s an undersized player so she was under-recruited – we couldn’t be more pleased that she’s a Cougar. The best thing about her is her competitiveness and her work ethic. I think she’s going to be someone to watch.

Q: What do you think is going to be the biggest challenge if you want to reach that ultimate goal of a National Championship?

A: The game is all about siding out so we want to improve our side-out numbers and we want to point score. If we can go back and score points with our serve and our block that’s going to be huge for us, but we also want to side-out with the best of them. We’ve got to be able to have offensively good performances from more than just two or three people. That’s where we’ve kind of lacked in those Sweet 16 games. We’ve had a couple people that played well but we need four or five players to play well at the right time and I think that’s what is going to carry us through to those next rounds.

Q: There should be plenty of challenges in the non-conference, notably Stanford, Wichita State, USC, Marquette, Utah, etc.. Is that a representation of trying to butt into that top four conversation by year’s end if everything goes according to plan?

A: Our ultimate goal with our schedule was to get our team ready for the best competition we could. We want to test our-self and we know we’re doing it early. If that happens and we end up with a great seed that’s awesome. I’ve never complained about our seed. I think that if we take care of business then we should be in a great position. It’s really up to us; we can only control what we can control. It’s not even whether we win or lose, it’s how well are we going to play? I do like our non-conference schedule. It’s going to prepare us for the West Coast Conference and all of that’s going to prepare us for the NCAA Tournament.

Q: How important is it to have those other foes in your conference that push you to the limit?

A: It’s critical for us. We look forward to matches against San Diego, LMU, Pepperdine, Santa Clara, Saint Mary’s, etc.. Those teams are constantly pushing us, they’re constantly challenging us. It’s good for us to have to be on our toes at all times. You can’t go on the road and think you have something in the bag, you’ve gotta work just as hard and keep your focus. I like the opportunity it presents for us to focus on our skills and what we have to do to execute.