Rallies And Blocks Lift #15 Oregon To Sweep Over Cal 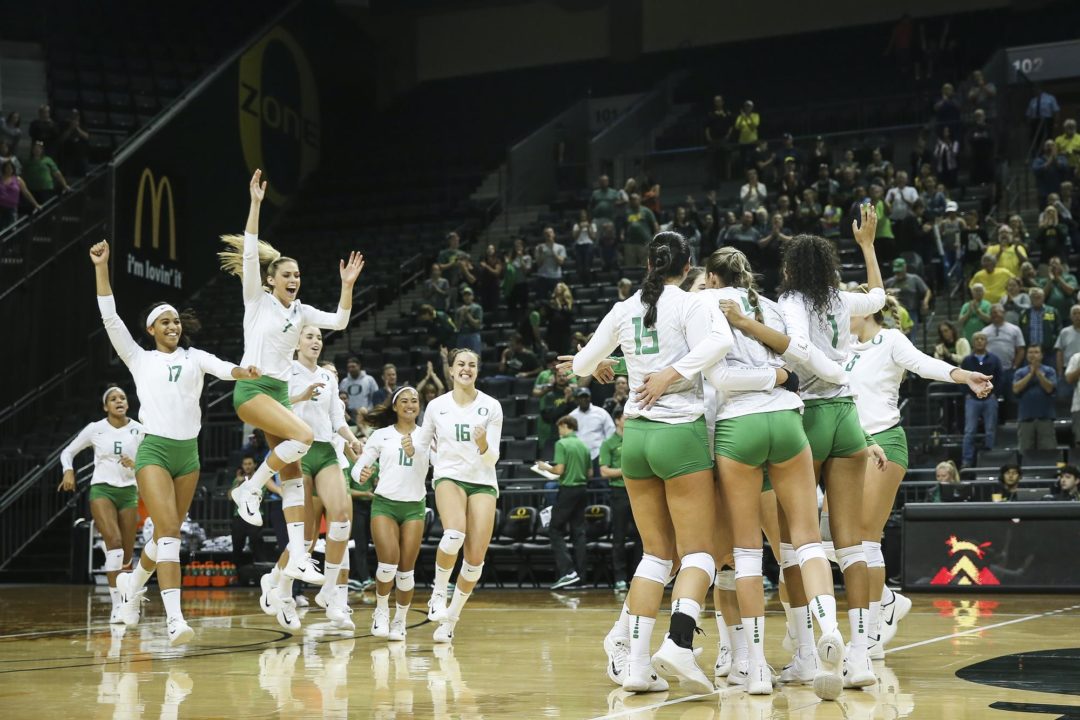 The Oregon Ducks picked up a trio of 25-19 set wins against California at home to rebound after back-to-back losses. Current Photo via Oregon Athletics

The Oregon Ducks picked up a trio of 25-19 set wins against California at home to rebound after back-to-back losses. The match came down the least amount of errors made, as both teams posted 30 kills in the match, but the Ducks blocked 14 balls to California’s five.

The Bear started the match with a 7-3 opening run but a kill from Sumeet Gill sparked a 6-0 run that featured two aces from Taylor Agost. The Ducks forged ahead to a 15-14 lead over the Bears. Oregon then went on another run to take a 23-14 lead before a Lindsey Vander Weide kill secured the first set win for the Ducks. The first set saw California with a low .086 hitting percentage while Oregon posted a .241 hitting clip.

The second set was a tight battle at the start with the score tied at 7-7 the Ducks took off on a 4-0 run before the Bears fought their way back on kills from Mima Mirkovic and Antzela Dempi. With Oregon leading 13-12 mid-set, the Ducks forged another run to take a 21-13 lead before Christine Alftin posted a kill to stop the run. The Bears tried to fight back but the difference was too much as Oregon took the second 25-19.

The final set of the match saw a tight first few points with the score tied at 4-4 before the Ducks posted a 5-0 run to take a 9-4 lead. They continued to grow their lead to 16-8 but California fought back with a 6-0 run to bring the score to 21-16. The Ducks took the 25-19 third set victory after California posted two hitting errors.

Agost led the Ducks with nine kills and five aces while Gill posted eight blocks. Also adding to the block party were Lauren Page with six and Willow Johnson with five. Alex Hojnar picked up a match-best 13 digs in the back row.

The 16th-ranked Oregon volleyball team rebounded from back-to-back losses on Sunday afternoon with a straight-set sweep of California, 25-19, 25-19, 25-19, in front of 1,604 in Matthew Knight Arena.

How it Happened: The Ducks (10-4, 3-3 Pac-12) were a little sloppy to start the match as the Bears jumped out to a 7-3 lead, but a kill by Sumeet Gill out of a UO timeout ignited a 6-0 run that included back-to-back aces by Taylor Agost. Leading 15-14, the Ducks ripped off eight straight points to gain separation, and a Lindsey Vander Weide kill secured the opening-set win.

The Ducks jumped on the Bears to start the third, using their third 6-0 run of the match to jump ahead, 9-4. Leading 16-9, the Ducks scored four straight to break the set open, 20-9. The Bears answered with four straight of their own and rallied within four, 23-19, but a pair of California attack errors ended the match and secured the sweep for Oregon.

Who Stood Out: Playing again without hitter Jolie Rasmussen, Agost played all the way around for the second match in a row and led Oregon with nine kills while recording a career-high five aces.. Vander Weide and Willow Johnson each had five kills, three other Ducks had three or more and senior libero Alex Hojnarpaced Oregon with 13 digs. August Raskie finished two digs shy of a double-double with eight while dishing out 14 assists.

The Ducks held California to a hitting percentage of .041, and dominated on the block with 14 to Cal’s five. Sumeet Gill tied her career-high with eight blocks to lead the defensive effort, while Page added six and Johnson sent back five.

What it Means: After suffering back-to-back losses for the first time this year entering the match, including a sweep at the hands of Stanford on Friday, the Ducks showed toughness in a great bounce-back effort. Oregon will now look to clean some things up from Sunday’s match as they prepare for two road matches next week to complete a span of four matches in seven days.

On going to Washington and WSU next week…
“Washington is favored to win the conference. They’ve had a few injuries, their setter is injured, but they’re extremely talented everywhere. Then we drive to Pullman. Pullman is a very hostile environment, and they do a great job there. They are a really big physical blocking team so we will need to climb the ladder and bring our energy.”

Notable: Agost’s five aces are the most by a Duck this season … Oregon picked up its seventh sweep of the year … The Ducks are now 10-0 this season when leading their opponent in attack percentage … The Ducks held an opponent under .200 hitting for the ninth time this season, and under .100 for the third time.

Up Next: The Ducks will wrap up a stretch of four matches in seven days next week as they go on the road to face Washington (Wednesday, 7 p.m.) and Washington State (Friday, 6 p.m.). Both matches will be broadcast on Pac-12 Networks.

The Bears had a season-low .041 hitting percentage.

“I thought our setters struggled a little bit today,” Cal head coach Matt McShane said. “They had some difficulty putting the ball in a good location and our hitting reflected that.”

Cal kept it close for the first half of each of the first two sets, including a hot start that saw the Bears establish a 7-3 lead in the first set. The Ducks came back to go in front but Cal still trailed just 15-14 after a kill by Dempi before Oregon scored eight points in a row to take control.

The Ducks led 12-8 in the second set but the Bears scored four of the next five points to trim it to 13-12 after a block by Dempi and freshman Preslie Anderson. A 6-0 run put the Ducks in control 21-13.

“We need to be better at making three, four, five good plays in a row,” McShane said. “I thought we made some good plays but they were mixed in around numerous bad plays. We need to be more consistent. When you’re inconsistent in the Pac-12, you end up struggling. I thought the score was a lot closer than it felt.”

Cal remains on the road next week to meet No. 15 USC on Friday and No. 13 UCLA on Saturday.