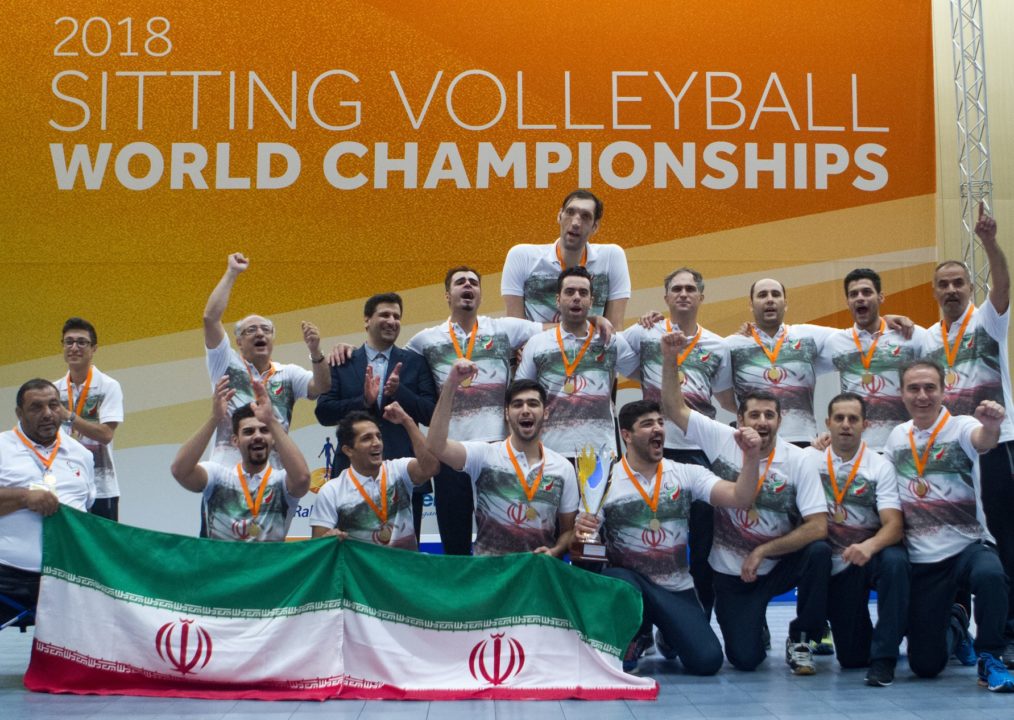 Iran (above) were the favorite entering the tournament, but the Russian women pulled an unlikely upset over the USA to win their title. Current Photo via World Para Volley

The men from Iran won their record-breaking 7th sitting volleyball World Championships on Sunday in 12 editions of the tournament, beating their arch-rivals from Bosnia & Herzogovina, the world’s #2s, in straight sets 3-0 (25-18, 25-13, 25-20).

On the other end of the spectrum are the Russian women, who are ranked #7 in the world, but roared their way to a first-ever sitting World Championship over the United States, who are the defending Paralympic Champions.

Match statistics were not available for any of the games of the tournament.

Led by Morteza Mehrzadselakjani, the tallest Paralympian ever at 8’1″ (2.46m), world #1 Iran dominated world #2 Bosnia & Herzogovina in the final match. In spite of being a dominant force in the final, Mehrzadselakjani wasn’t chosen for the tournament’s dream team. The Iranian men were dominant throughout the tournament, losing only two sets, and no matches, in total, including a 3-1 win over world #3 Egypt and a 3-0 sweep in the semifinals over world #5 Ukraine.

Ukraine then swept Brazil, another top 5 team in the world, in the bronze medal match. The final 3-0 score in that match belies its competitiveness: each set was won by the minimum 2 points, with two of the three going to extra points.

World ParaVolley has a new world champion! In a replay of the Gold Medal match from the 2016 Paralympics tonight, Iran, the 2016 Gold Medallists took on Bosnia and Herzegovina, the Silver Medalists from 2016 and the reigning 2014 World Champions. Tonight it was Iran's turn to be crowned as World Champions as they defeated their Paralympic rivals in a convincing fashion. Playing in front of a boisterous full-house crowd, Iran took the match in 3 sets by scores of 25-18, 25-13, 25-20 to claim the gold. As finalists at the 2018 Sitting Volleyball World Championships, both of these teams qualify for the 2020 Tokyo Paralympics.

In a final full of stunning rallies, the Russian women pulled a stunning upset over the American women: a team that was absolutely dominant in Rio en route to Paralympic gold.

The Americans swept the Russians in straight-sets in pool play, and looked like they might be headed that way in the final as well after cruising to a 25-18 first set win.

That loss to the U.S. was Russia’s only of the tournament – they only dropped two sets otherwise. That includes sweeping world #2 China 3-0 in the semi-final.

Dear Keith, thanks so much. It is a wonderful article.