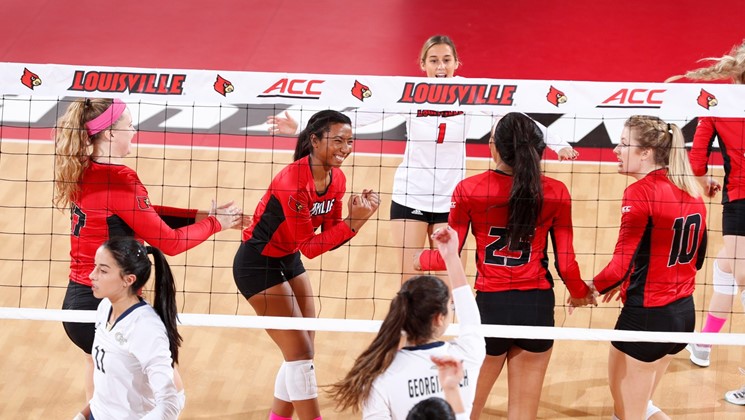 TALLAHASSEE, Fla. – (RV) Louisville needed strong defensive and serving efforts, along with mastering a stalwart defense in Florida State, to earn a road victory over the Seminoles (27-25, 25-21, 25-20). In all three sets, FSU had a lead after 12, but could not slow the Louisville offense down late, nor find a terminator of their own to overcome the Cardinals. Louisville’s win helps the Cardinals keep pace with the ACC’s leaders, Pitt and N.C. State (both are 9-1 in the ACC).

Louisville was led by sophomore Melanie McHenry 11 kills, 4 digs, 3 blocks and 2 aces. Senior Maggie DeJong also added double-digit kills with 10. DeJong also blocked a match-high 7 balls to go with her .412 hitting percentage, also a match-high for attackers. Defensively, libero Gabbie Wiley dug a match-high 11 balls to go with her 2 aces. The offense was directed by setter Wilma Rivera with 33 assists, 7 digs, 2 blocks and an ace. Senior Tess Clark also added 8 kills, moving her past 1,000 for her career.

For the Seminoles, Milica Kubura led FSU with 9 kills, hitting .333 and adding 3 blocks. Taryn Knuth was effective in her front-row defense, adding a team-high 5 blocks. Defensive specialists Logan Holanchock and Cecile Woie kept the Seminoles consistently in the contest by digging 10 balls each.