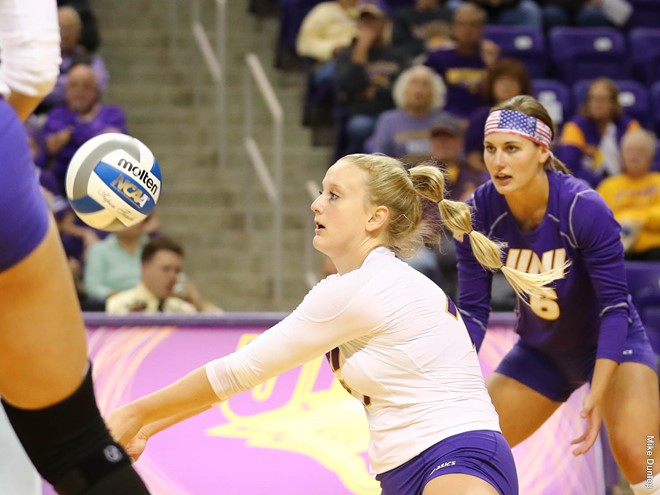 Omaha, Nebraska – Playing on a neutral court in Omaha, Nebraska, Northern Iowa jumped early on Nebraska and finished the job in four sets for their fourth-ranked victory of the season.

That fourth-ranked win gives Northern Iowa the most in the country, as they also took down a ranked Iowa State squad earlier this week. Beyond that, the Northern Iowa win snapped Nebraska’s six match winning streak as they were previously unbeaten with Kelly Hunter in the lineup.

In set two, Northern Iowa jumped ahead 6-2 early, and carried their lead late before Nebraska stormed back. However, it wasn’t enough as the Panthers held on for a 25-23 set win and a 2-0 lead.

The Cornhuskers didn’t just lay down, as they busted out in set three with the biggest set deficit to stay alive and force a fourth set behind Annika Albrecht (15 kills, 10 digs for the match), Mikaela Foecke (12 kills, 12 digs for the match), Kelly Hunter (47 assists, nine digs, three kills) and Jazz Sweet (11 kills in three sets).

However, they couldn’t get things clicking as well in the fourth, as Northern Iowa held a steady lead seemingly throughout en route to a 3-1 upset. Bri Weber led the way along with Taylor at 15 kills as setter Heather Hook filled the stat sheet with 40 assists, seven kills and seven digs. Three Panthers racked up 15 or more digs too in Taylor Hedges (16), Kendyl Sorge (15) and Karlie Taylor.

Nebraska actually out-hit Northern Iowa .233 to .232 as the stats were pretty even across the board since Nebraska won such a lopsided third set. Both teams put up strong serve totals, as Nebraska was more efficient with five aces to zero errors, but Northern Iowa was the more aggressive serving team with eight aces to five errors.

Nebraska finishes up this tournament tonight against the hosts, Omaha. After that they’ll have some time to prepare for a colossal Big Ten opener at University Park against Penn State. Northern Iowa also has another match left as they get Kansas State tonight before opening MVC play next week with conference newcomer Valparaiso.

OMAHA, Nebraska – The University of Northern volleyball team recorded one of the program’s most memorable wins with a 3-1 victory over No. 10-ranked Nebraska on Saturday at the Omaha Challenge held in Baxter Arena. UNI won by set scores of 25-20, 25-23, 14-25, 25-21.

It marks the first time in program history that UNI has defeated Nebraska. In fact entering the match, UNI had won only one set all-time against Nebraska and that came all the way back in 1977 in a 1-1 tie.

UNI scored a first-set win over Nebraska, 25-20. UNI has won the first set in 11 matches this season and the Panthers are 10-1 when winning the opening stanza.

The Panthers extended the lead to 2-0 with a 25-23 win in the second set. UNI looked to be cruising to a two-set lead after the Panthers had taken a 21-11 lead. But the Huskers used a 13-2 run to close to within 24-23 of the Panthers. Junior Bri Weber was able to close out the second set with a kill to give the Panthers a 2-0 lead.

Redshirt freshman Taylor Hedges notched her third service ace of the match and junior Bri Weberadded a kill to give UNI a two-point advantage at 17-15 forcing another Nebraska timeout.

The Huskers knotted the set again at 18-18 only to see the Panthers run off three straight to take a 21-18 lead. The third point of the three-point run came on a service ace from junior Piper Thomas.

UNI maintained at least a two-point cushion the rest o fthe way and closed out the victory on a solo block from Thomas to give the Panthers a 25-21 triumph. Sophomore Karlie Taylor came up big as she recorded six of team-high 15 kills in the fourth set.

Weber and Taylor tied for team-high honors in kills with 15. Taylor posted her seventh double-double of the year by adding 15 digs.

Senior Heather Hook registered seven kills (.636 hitting percentage) to go along with 40 assists and seven digs against the Huskers.

UNI tallied eight service aces – one off the team’s season-high of nine they had against Austin Peay (Aug. 27).

UNI will be back in action later this afternoon at 5:30 p.m. against the Kansas State Wildcats.

UNI led throughout most of its first-set win and had a 10-point lead in set two before a furious Husker comeback attempt came up just short at 25-23. The Huskers dominated the third set, but the Panthers answered in set four and broke open an 18-18 tie with 7-3 run to finish the match.

Annika Albrecht had 15 kills and 10 digs while hitting .314 to lead the Huskers. She also joined NU’s career top 10 in service aces with the 113th ace of her career. Mikaela Foecke had 12 kills and 12 digs. Jazz Sweet had had 11 kills on .375 hitting. Briana Holman had eight kills, while Lauren Stivrins had seven kills and four blocks. Kenzie Maloney had a match-high 21 digs, while Sydney Townsend added 10. Kelly Hunter had 47 assists and nine digs.

Bri Weber and Karlie Taylor each had 15 kills for the Panthers (10-3). UNI served eight aces on the Huskers, which matched the most aces allowed by the Huskers since 2011.

Set 1: The Huskers played from behind early but four kills by Holman helped the Huskers to a 7-6 lead. Nebraska would claim a two-point edge but the Panthers battled back to go ahead 15-13 at the media timeout with a 5-1 spurt. After the break, Foecke and Holman teamed up for a block and Sweet put a ball away from the right side to even the set at 15-15. But the Panthers reclaimed a 17-15 lead on an ace serve. NU trailed 20-17 when Stivrins knocked a kill down at the net. The Huskers pulled within 20-19 on an ace by Albrecht, the 113th of her career, which moved her into a tie for 10th in school history. But UNI answered with a kill and two straight aces to go up 23-19, and the Panthers finished the 25-20 win on a kill by Taylor. UNI had four aces in the set.

Set 2: NU’s struggles in serve receive continued as the Panthers opened the set with three straight points and eventually led 6-2 after UNI’s fifth ace. The Panthers led 8-4 when Sweet and Albrecht terminated to slice the deficit to two. But the Panthers took control of the set with an 8-2 run to go up 17-9. UNI continued to pull away and went ahead 21-11 with another ace serve and a block. Nebraska strung together three straight kills by Holman, Albrecht and Sweet to pull within 21-14 and build some momentum. After a Husker hitting error, Holman got another kill and Hayley Densberger served an ace to cut the Panthers’ lead to 22-16. The deficit shrunk to three at 23-20 after Albrecht tallied three kills for the Big Red in a 4-0 run. But Taylor connected for set point for the Panthers at 24-20 on the next rally. Stivrins posted a solo block and UNI hit the antenna to make it 24-22, then Foecke got a kill to make it 24-23. But Weber clinched the set for UNI at 25-23 to thwart the Huskers’ comeback attempt.

Set 3: Nebraska got off to a better start in set three with six early kills, two by Foecke and two by Sweet, for a 10-7 lead. Hunter served an ace after a Holman kill to build the Huskers’ lead to 15-10, and Albrecht’s ninth kill of the day made it 17-12 and forced UNI’s second timeout of the set. Stivrins placed a kill to the back corner to begin a 5-0 run that put the Huskers ahead 22-13 with Hunter adding a kill and Stivrins and Albrecht teaming up for a block in that run. Stivrins later combined with Anezka Szabo to post a block for set point, which the Huskers immediately won on a UNI error. Nebraska won 25-14 after hitting .478 in set four with 12 kills and just one error.

Set 4: The Panthers jumped out to a 9-3 lead with eight kills on their first 11 swings. Sweet put an end to the 4-0 UNI run with a kill, and Foecke served an ace before Holman and Sweet got a block to pull the Big Red within 9-6. Sweet found the floor again before Albrecht connected on back-to-back kills to cut it to 10-9 and force a UNI timeout. Densberger served an ace after the timeout to level the score briefly before UNI answered to go up 12-10. Albrecht posted two more kills around a UNI hitting error to put the Big Red in front, 13-12. The Panthers went back in front by two, 17-15, courtesy of a Taylor Hedges ace and two Bri Weber kills. Hunter dumped a kill and UNI hit wide to tie it up, 18-18. But the Panthers scored the next three for a 21-18 lead, including their eighth ace of the match. The Panthers finished off the win with a 25-21 fourth-set victory.

Up Next: The Huskers face the Omaha Mavericks at 7:30 p.m. at Baxter Arena Saturday night. A free live stream will be provided at OMavs.com.