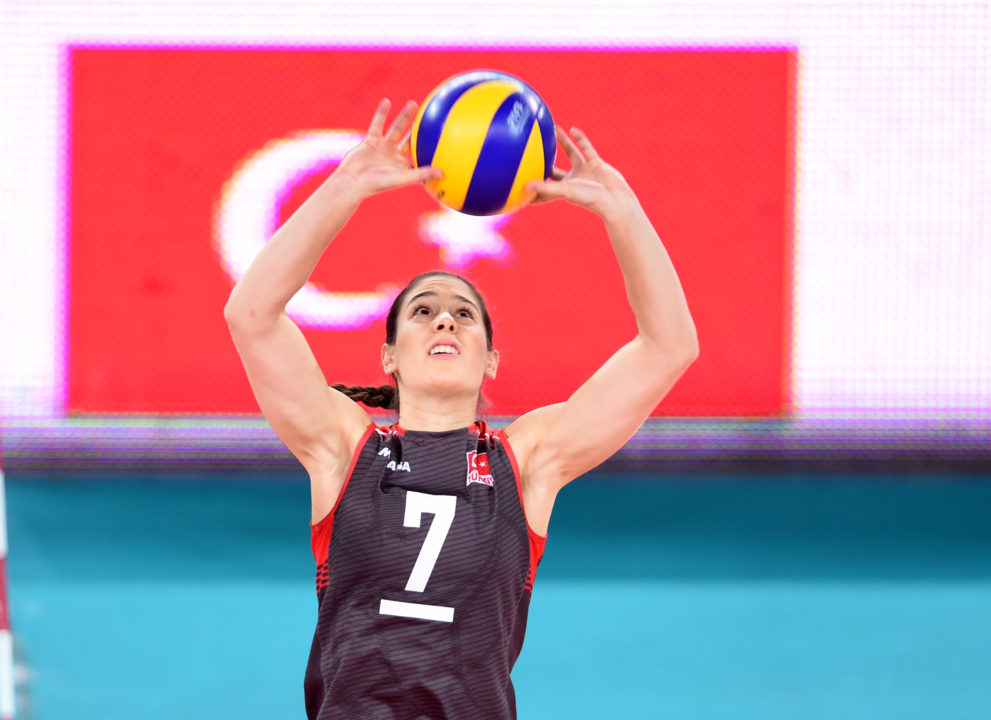 Turkish Captain Çagla Akin guaranteed the press that the Turkish squad will win a gold medal tomorrow. Is she going to able to stop Slovenia's Cinderella Story? Stock Photo via FIVB

Slovenia and Turkey will battle for Gold after today’s victories against Bulgaria and the Dominican Republic, respectively.

On one side, we will have an established Asian volleyball powerhouse, which ranks a respectable 12th in FIVB’s adult rankings and 2nd in FIVB’s U23 rankings. Matter of fact, they are the tournaments current runner ups, having lost the gold medal to Brazil in four sets in 2015 to Brazil. On the other side, we’ll have the tournament’s sensation, Cinderella story, and feel good team: hosts Slovenia. Differently from Turkey, its adult team ranks at the 115th spot at the FIVB rankings, while its U23 squad ranks dead last, with zero ranking points. They are, however, unbeaten in the tournament and will have the home crowd at their side, while Turkey has lost a game.

Unexpectedly, and maybe took by the emotion of their win against the Dominican Republic, Turkey’s captain, Çagla Akin, has guaranteed a gold medal victory tomorrow in an interview. Surely, the Slovenian squad will use it as motivation to thwart her plans.

In a highly critical moment in the semifinal Slovenia came from behind in the fourth to first reach set point at 14-13. Bulgaria had a set point of their own at 15-16, but the hosts replied with two blistering serves from Tina Grudina which allowed Sasa Planinsec to bring down two spikes from the right and extend the lead to 3-1. It was all a matter of time there on for the hosts as Bulgaria ran out of steam and Slovenia demolished them in the fifth.

Opposite Iza Mlakar was again the leader in Slovenia’s sixth win in as many matches in this tournament, scoring 21 points including four blocks and an ace. Middle blocker Planinsec added another 13 points for the winners, including five blocks, as Slovenia dominated play on the net.

Bulgaria will meet the Dominican Republic for bronze on Sunday at 16:00 local time (14:00 GMT), prior to the final which begins at 19:00 (17:00 GMT). Both games will be streamed live on the FIVB YouTube Channel.

Slovenia captain, Eva Mori: “Congratulations to the girls and to the whole team. Judging by the results it looks like it was easy, but in reality it wasn’t like that. I think it was the thoughest match so far, although tomorrow will be even harder. We will do our best and surprise the fans tomorrow.”

Slovenia coach. Alessandro Chappini: “It was a really tough match today, but the girls were very good. I think today we won a really great match. Turkish team is very emotional so tomorrow it will be very important to play well from the beginning and destroy their self-confidence because they are a very strong team and very dangerous.”

Bulgarian captain, Gergana Dimitrova: “I think when you play at semifinals you go all the way, you give your 100% or even more. I think till third set we played our game, fourth set was the key set for us, because after that everything went down and we just gave up. Tomorrow we will still aim for victory no matter what.”

Bulgaria coach, Antonina Zetova: “I think both of the teams played very well, but at the key moment we didn’t play very good. Once you start to give up is very hard to play well again. Congratulations to Slovenia.”

The loss of Madeline Guillen who had to be carried off to hospital in a stretcher after a left knee injury at 3-3 in the fifth set clearly disrupted the Dominican Republic. The 16-year-old outside hitter had been her side’s best scorer to that moment with 12 points. After the substitution with Natalia Martinez Turkey made a 12-4 run to take the fifth and then held the Caribbean side at bay to force a seventh.

The Dominican Republic could have closed the deal in six sets when they came back in the sixth from 5-11 and 11-14 to cancel three set points of Turkey and tie the score at 14-14, before the Balkan side brought in the next two points. The fifth was too close to call until the two team switched courts with Turkey ahead by a point. But with Beyza Arici pounding the Dominican Republic from the service line and the block from the right allowing nothing through, Turkey made a 5-0 run for 13-7 and essentially bring it home.

Hande Baladin with 22 points and Ebrar Karakurt with 21 led Turkey as their side dominated the scoring skills to compensate for their 24 unforced errors. Gaila Gonzalez was the Dominican Republic’s best scorer with 16 points.

Turkey captain, Çagla Akin: “We are all so happy. We fought really, really hard for this win. Now we have one more match in front of us, one final. We will fight even more and we will take this World Championship. I am sure of that!”

Turkey coach, Ataman Guneyligil: “We did so many unforced mistakes in the first four sets. We didn’t defend well, especially the tipping actions of the Dominicans, we also didn’t serve well. In the next three sets we raised the level of our game and that was the reason for our win.”

Dominican Republic coach, Wagner Pacheco: “The injury of our player [Madeline Guillen] changed the course of match a lot, but it was not the only reason we lost today. We have a young team. They played above their capabilities today. They fought hard and I don’t have anything to say to them. I am happy with what we showed so far.”

Dominican Republic captain, Yokaty Perez: “We had the match already in our hands but then we made mistakes that cost us the victory and we were also left without a key player. In the second part of the match we concentrated more on our injured teammate and lost control of the match.”

Middle blockers Lays Freitas and Mayany Souza scored decisive block winners to lead reigning champions Brazil to a hard-earned 4-0 (18-16, 16-14,15-10, 15-7) win against Thailand. On Sunday, titleholders Brazil will take on Cuba for a revenge of their 1-4 defeat in the last Pool B match, which knocked them out of a semifinals spot, in the battle for the fifth rank while Thailand challenge China in the race for the seventh place.

Edinara Brancher scored 14 attacks to top all scorers in the match; then Drussyla Costa, Freitas and Souza contributed eight points apiece for Brazil’s strong match finish. Thailand’s top scorer Thanacha Sooksod, who registered a tournament high and all-time competition record of 32 points on Friday evening, was controlled to score “only” 13 points. Brazil made the main difference with 13-1 blocks.

Thailand started the first two sets with great intensity but eventually could not wrap up the sets in the decisive phases of the match. Brazil’s middle blockers Freitas and Souza ended the Asian firework twice with two remarkable block winners. The Asians did not recover from the setback while the young Brazilians never looked back until the end of the match. After 62 minutes, Drussyla scored another block kill to offer the reigning champions the chance to battle for the fifth position here in Ljubljana.

Brazil coach Wagner Coppini: “It was very important for us to quickly recover from the losses against Bulgaria and Cuba. I am happy my players regained confidence tonight. Now, we have to reorganize our strategy for tomorrow’s match against Cuba. We watched them today and need to find something different to beat them.”

Brazil captain Drussyla: “Playing Asian teams is always a challenge for us. We worked hard to keep our concentration on the highest level throughout the match. In the duel with Cuba we will have the chance to correct our mistakes and show a better performance.”

Thailand coach Chamnan Dokmai: “We had a very tough match yesterday against the Dominican Republic and my girls haven’t recovered yet. We used all our guns yesterday and we could not keep the pace today.”

Thailand captain Tichaya Boonlert: “The match today was totally different than yesterday’s. We performed very well against the Dominican Republic. We could not take advantage of Brazil’s fragility in the first two sets.”

The Chinese team played their best in the second set as they deployed their solid offense against the struggling Cuban defense. However, it was far away from good enough. The powerful Cubans lived up to their exploit versus Brazil on Friday night, giving the Asian side an extremely hard time. Cuba saved two set balls in the end of the fifth period before closing it out at 18-16.

Cuba coach Wilfredo Robinson: “Our team’s performance improves from match to match. We play against very strong opponents here in Slovenia. They force us to give our best on the court and that is why our routine improves day by day. Sometimes we still lack of stability – however – we are working on it.”

Cuba captain Diaris Ramos: “We did not have much time to study China’s play. We worked very hard in block and defence. We knew that China serve very well and has a strong fighting spirit. That’s why we had to give our best on the court today.”

China coach Wu Sheng: “This was the first time that we played at this venue. We did not have time to get accustomed to the new arena. Thus, it was our worst performance in this tournament. I am very disappointed. We will try to prepare well for our last match and I will try to help my players boost their spirits after today’s loss.”

China captain Long Cheng: “We are very disappointed. From the very beginning, we committed too many mistakes. Cuba’s play improved from game to game.”