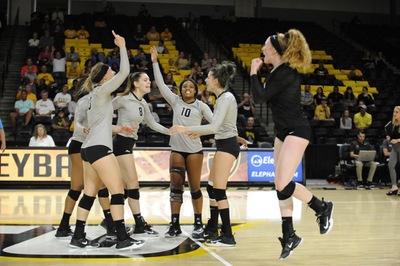 (RV) VCU got all it could handle from Davidson, but the Rams turned victorious in four sets on senior night to clinch the #1 seed in next weekend's A-10 tournament. Current Photo via VCU Athletics

RICHMOND, Va. – VCU earned the program’s first regular season A-10 conference title with a 3-1 defeat against Davidson on senior night at the Siegel Center Sunday evening (25-10, 19-25, 25-15, 25-22). The last time they claimed the conference crown was in 2009 when they were members of the CAA. The win was VCU’s 25th straight victory this season, dating back to September 1 when they last lost to Notre Dame in four sets.

Senior libero Rebekah Strange dug a match-high 34 balls on the evening, and now sits third all-time for digs in a career at VCU. Strange also added a match-high 3 aces and assisted on 3 attacks. Leading the attack for the Rams was sophomore Gina Tuzzolo with 15 kills and added 6 blocks for the defense. Fellow sophomore Jasmin Sneed pounded 14 kills and hit .500 without an error on the evening. Sneed blocked a match-high 8 blocks for the #2 blocking team in the nation (3.28 bps), second only to Texas (3.31). VCU ran a 6-2 offense against Davidson, and setters Dajah Ard (29 assists, 12 digs) and Tyler Sroufe (14 assists) contributed to the offensive output.

Davidson received career nights from a few players, but it wasn’t enough. Sophomore outside hitter Emma McLaughlin finished with a career-high 10 kills, leading the Wildcats on offense. Senior defensive specialist Kylie Bishopp finished with a career-high-tying 17 digs on defense. Sydney Champaigne and Mason Rooney split setting duties on the evening as well, leading to 23 and 12 assists, respectively. Rooney added 9 kills and 12 digs for Davidson, narrowly missing a triple-double.

VCU now has the #1 seed in the upcoming Atlantic 10 Conference Tournament being held in Pittsburgh, Pennsylvania, hosted by Duquesne University, from November 17-19. The Rams receive a bye on Friday and will play the winner of the host Dukes and Rhode Island on Saturday at 2PM Eastern Time. VCU went only one set over the minimum in the combined four wins against Duquesne and Rhode Island.

The short story: Sophomore Jasmin Sneed supplied 14 kills and eight blocks to lead VCU to its 25th straight victory Saturday. With the win, VCU completes a perfect Atlantic 10 slate (14-0) to clinch the league’s regular season crown for the first time. The Rams will be the No. 1 seed in the A-10 Tournament next weekend.

Davidson finishes the season at 10-17 (3-11 A-10), while VCU posted an unblemished conference record and finished the regular season at 28-2.

McLaughlin registered 10 kills, her first double-digit performance of her career, while recording a near .300 hitting percentage at .286. Reigning Atlantic 10 Rookie of the Week Ellie Crosley added eight slams, while senior Kylie Bishopp matched a career-best with 17 digs.

The ‘Cats were slow out of the gate, as the Rams took a hefty 15-1 lead before going on to take the opening stanza.

Davidson fired back in the second frame, reaching a 19-19 tie and then taking the last six points (courtesy of McLaughlin, Crosley, and junior Mason Rooney with two kills each) to take the set 25-19.

The Rams, who recorded their 25th straight victory Saturday, quickly responded to take the third frame, but had to work for the final, as the ‘Cats forced 11 tied scores before succumbing to the loss.