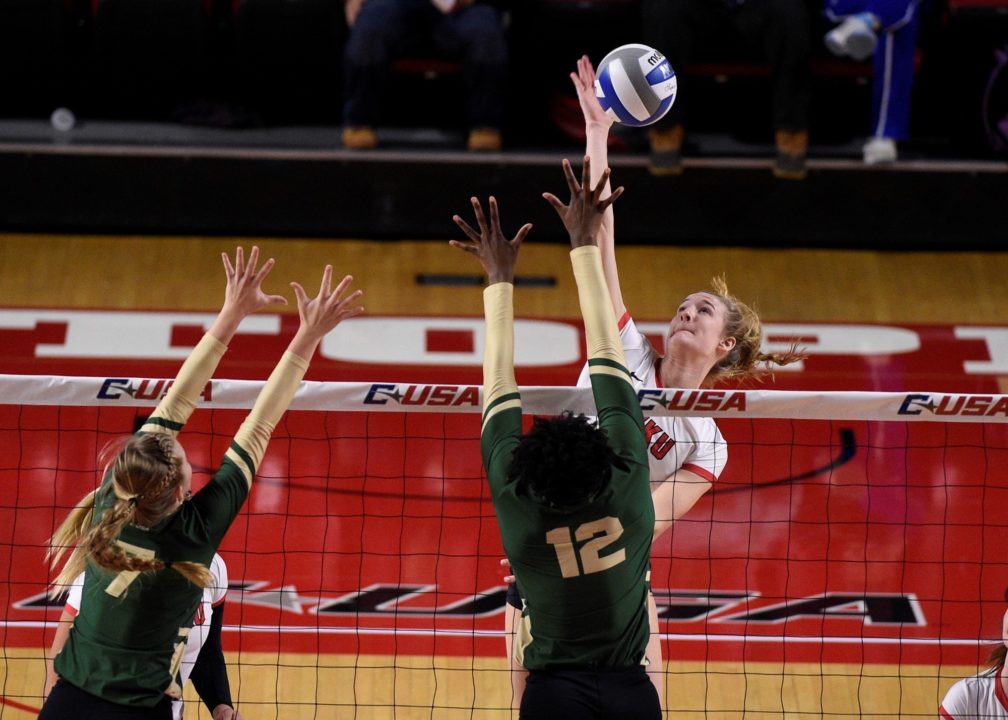 The Lady Toppers were led by junior middle blocker Rachel Anderson who notched 22 kills with a .529 hitting percentage and 5 blocks. Her second kill in the first set marked the 1,000th of her career. Senior setter Jessica Lucas added 44 assists, while Sydney Engle and Darby Music both recorded 11 digs.

In the first set, Western Kentucky cruised to a 25-14 win, hitting .400 in the set that closed on a 6-0 WKU run. In a tight second set, a kill from Sydney Rowan and a service ace from Yumi Garcia earned the Niners a 27-25 victory to tie the match at 1-1. This was the Niners first set victory over Western Kentucky since 1988 having been swept the previous 4 matches.

In another close battle, the Lady Toppers took the third set 25-20 behind 7 kills from Rachel Anderson. The fourth set was all Western Kentucky, which the Lady Toppers won by a lopsided 25-6 score to close out the match.

Next up, Western Kentucky will play the winner of Rice and Southern Miss in the Conference USA semifinals on Saturday in Bowling Green, Kentucky.

BOWLING GREEN, Ky. – Behind 22 kills off the hand of junior Rachel Anderson – including her 1,000th career kill – WKU Volleyball claimed a four-set victory over No. 7 seed Charlotte to open play in the 2017 Conference USA Volleyball Championship. The Lady Toppers have now won 53-straight matches at home over conference opponents and have yet to lose a match inside E.A. Diddle Arena against a Conference USA foe.

“What a tremendous year for Charlotte,” head coach Travis Hudson opened. “Charlotte finished in the cellar last year, in last place in Conference USA and for them to turn it around and win 19 games and get to this tournament and perform the way they did speaks so much to the direction that their program is headed. Much credit goes to them. We weren’t great. I don’t know, I think you’re one way or another when you start conference tournament time. I think you’re either jacked up and you’re really good or you just can’t seem to catch a rhythm. I thought we were tight today and didn’t really find a great rhythm. But hopefully, we’ve got that behind us now and can settle into this thing and play well from here forward.”

“The crowd was phenomenal today and I thought it was both our biggest enemy and our biggest ally as that much went on,” Hudson continued. “I thought at the beginning, we’re playing at home, we’re the higher seed, you’ve got your crowd behind you and you don’t want to disappoint that whole situation. I thought that contributed to us being tight but as we started to settle into that third and fourth set it was a real ally to have them behind us. Our kids started making hustle plays, the crowd always appreciates that and it really helped us build momentum.”

“It’s definitely nicer knowing some of the people in the stands,” Anderson echoed. “Going to conference other places, you don’t have the crowd that we do here. This is our home court, we’re most comfortable here, we didn’t have to go to a hotel or do all the travel. I feel like our team is more relaxed and comfortable here.”

The Lady Toppers opened postseason play with a 25-14 first-set victory over Charlotte on Friday. WKU got on the board first on a Sydney Engle kill before Charlotte countered with the next two tallies. Action remained even to the 5-5 point when the Red and White registered three-straight points to take the lead for good. The 49ers pulled back within two at 13-11 but WKU would finish things up with a 12-4 run to close the door. Rachel Anderson notched six kills on seven swings in the frame while WKU finished with 15 strikes as a unit, working at a .400 clip. Defensively, WKU limited Charlotte to six kills and a .042 hitting percentage.

Charlotte retaliated in set two and after forcing extra volleyball claimed set two 27-25. There were six ties and four lead changes in the frame. WKU’s last lead in the frame came at 22-21 before Charlotte pushed ahead to set point. The Lady Toppers responded with two-straight points to tie things at 24-24 and again at 25-25. The 49ers went on to score the set’s final two points to even the match at 1-1. WKU worked at a .276 offensive clip in the set led again by Anderson with six kills.

Following the break, action remained close but the Lady Toppers ultimately claimed the 25-20 set three frame to regain the lead in the match. The sides worked out to a 7-7 tie before the hosts began to pull away. WKU strung together a four-point run to take a 17-12 lead before adding a similar run to make it set point at 24-20. Cavanaugh found the floor with her 11th kill of the day to give WKU the 2-1 lead in the match. Anderson tallied seven kills in the frame while Cavanaugh posted five. WKU was held to a .273 clip in the frame while Charlotte was limited to a .129 rate – its best on the match.

In the fourth and final set, Charlotte struck first but WKU Volleyball followed with a seven-point run and never trailed again. After the 49ers posted back-to-back points, the Lady Toppers responded with another seven-point stretch to open up a 14-3 advantage. WKU went on to push ahead to 22-5 before claiming the frame 25-6. Mary Martin capped the victory with an ace. The 19-point margin was WKU’s largest of the season as Charlotte was the first squad the Lady Toppers held to single digits in a set.

Offensively, WKU worked at a combined .328 hitting percentage in the match while holding Charlotte to a .065 rate. The 49ers are the sixth team WKU has held to a hitting clip below .100. Anderson led the Lady Toppers with a .529 clip.

Cavanaugh came on hot in the heart of the match and finished the day with 13 kills to go along with six digs and three blocks – including a solo stop. The solo block moved Cavanaugh into a tie for eighth place on the WKU Volleyball career list.

Jessica Lucas finished the match with 44 assists to bring her career count to 5,169. The senior added eight digs, five kills and a block assist as well.

Taylor Dellinger finished the day with eight kills for the Lady Toppers. She also posted a pair of digs and block assists on the day.

Sydney Engle and Darby Music led WKU with 11 digs each. Emma Kowalkowski was also in double digits with 10. Kowalkowski chipped in two aces while Engle added another. WKU finished with six aces in the match.

WKU will be back in action on Saturday in the Conference USA Championship Semifinals against No. 6-seeded Southern Miss. First serve of the match will go up at 1:30 p.m. CT, from E.A. Diddle Arena.

“I’m just so proud of this group,” began Head Coach Karen Weatherington. “I’m going to miss this bond. We played well right to our potential. I was really proud of how we went out.”

Charlotte (19-12) traded points with WKU in the early going of set one thanks to a kill and ace by Tatyana Thomas and first combo block of the day for Alex Boone and Jannelle Curtiss. Jocelyn Stoner kept the Niners within striking distance picking up a kill for a 13-11 set before Thomas did the same at 15-12. Boone put down to final kill late in the opener while Taylor Dellinger put down two for WKU in the 25-14 win.

In the second, Charlotte trailed 16-12 before turning on their rally leading to the 27-25 victory. Sydney Rowan started with a kill before another Thomas ace and solo block by Janell Sparks tied the set up 20-20. The 4-0 run out of a Charlotte timeout ended with a Boone kill forcing WKU to stop play down 21-20. After two-straight kills by Alyssa Cavanaugh put WKU up 22-21, Boone and Sparks threw down kills on the front and back ends of a Sofie Perrens ace to bring set point 24-22. WKU fought off the first set point before Sparks gave Charlotte their second attempt after another kill. At 25-25, Rowan gave the 49ers their final set point needed before Yumi Garcia, Conference USA’s Libero of the Year, served up an ace to even the match at one set apiece.

WKU (28-3) had to rebound from their first set loss against the Niners since joining C-USA, fighting off another late rally to secure a 25-20 win. Boone cut the lead back to one at 7-6 in the young third before a Katria Stewart block with Thomas did the same at 13-12. Charlotte needed a timeout down 16-12 before again settling down to make things interesting in the final stages. A pair of Thomas kills and ace from Mackenzie Reaume trimmed the deficit down to 20-19. Cavanaugh took over for WKU, despite a last kill from Rowan on Charlotte’s side, to convert the final three for WKU in their 25-20 victory.

The Niners got into an early hole in the fourth aiding the Hilltoppers in making a trip to Saturday’s semifinals. The 49ers took the first point of the set on a WKU error before getting their second on a Molly Shaw kill moments later. WKU put together a trio of 7-0 runs as the Niners saw Sparks and Thomas convert their final career kills for Charlotte to close out the year.

“We played at a championship level,” finished Weatherington. “We executed so well. We knew there was no pressure on us and made a great statement for ourselves. Being led by Tatyana, she’s been a shining star these last few matches. We had a little hiccup with Boone going down and I could see it took the wind out of our sails, but we’ll bounce back. Our seniors will still be around to help us out with practice in the spring. We’re all excited and optimistic. It just takes one moment at a time to turn the tide and set the stage for our future.”

Rachel Anderson led WKU with a match-high 22 kills followed by Cavanaugh’s baker’s dozen. Sparks led the 49ers in her final match with 10 while Boone posted eight, hitting .438, before going down. Garcia ended her stellar first season with the Niners adding 17 more digs, finishing with 617 on the year, setting Charlotte’s new season record while moving up to 13th all-time in a Conference USA season.