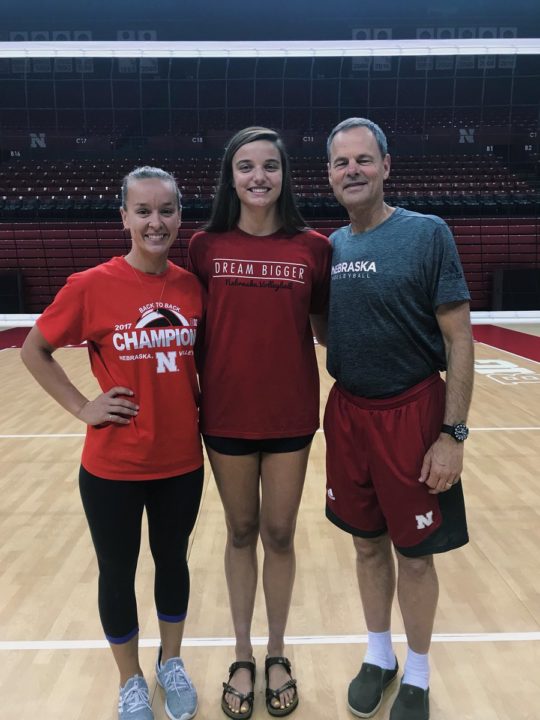 Nebraska has landed their fourth 2021 commit in 6'4" middle blocker Rylee Gray out of Omaha. Archive Photo via Rylee Gray (@ryleegray_)

Class of 2021 middle blocker Rylee Gray, who stands at 6’4″, has committed to the University of Nebraska women’s volleyball program.

Another key piece of this commitment is that Gray chose Nebraska over Stanford, another blue-blood in the volleyball sense who competes for high-level finishes with the Huskers. A key nugget also came out in the recruitment, as according to the Omaha World-Herald, 62-year-old Nebraska head coach John Cook told her he would remain the team’s head coach through her senior season in 2024.

A sophomore-to-be at Elkhorn South High School in Omaha, Nebraska, Gray will be in her second year of varstiy come the fall season. In year one with the school, she recorded 308 kills (2.7 per set) on a .439 hitting percentage, 139 blocks (1.2 per set) and 35 digs (0.3 per set). Her team also went 26-14 and made the Class B state tournament semifinals.

On the club circuit, Gray plays with Nebraska Elite Volleyball and the Elite 15 Revolution squad. Recently, she helped the club to a runner-up finish in the open division of the AAU national tournament in Orlando, Florida.

Gray also becomes the fourth commitment for the Huskers for the class of 2021, joining outside hitter Lindsay Krause, defensive specialist/libero Alexis Rodriguez and setter Kennedi Orr.

Nebraska is the defending National Champions and are coming off of a 32-4 season in which they went 19-1 as a member of the Big Ten.

i’m staying home! i’m so blessed and excited to announce my commitment to the university of nebraska lincoln to continue my academic and volleyball career! i wouldn’t be here today without my family, coaches, teammates, and friends supporting me in everything i do! GO BIG RED!! pic.twitter.com/JQP97sgbu3