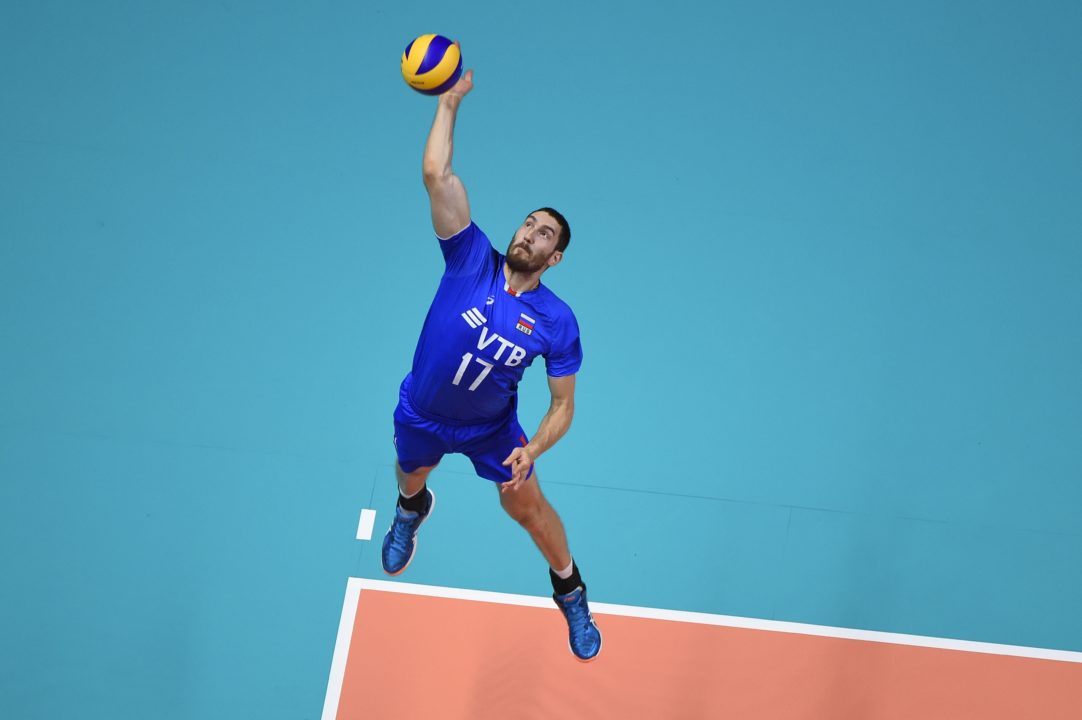 Mikhaylov didn't play at all during the tournament's preliminary stages, but went huge in the Final 6 to lead Russia to gold while dropping only 1 set in 4 matches. Current Photo via FIVB

Russians claimed their first global gold in 5 years and silenced 10,000 partisan fans in Lille, France with a dominant 3-0 sweep of the favored French on Sunday. That marked Russia’s first worldwide title since the 2013 World League, and built upon their European Championship from last season.

The MVP of the Final 6 tournament was Russian opposite Maxim Mikhaylov, who didn’t actually play or score a single point in the preliminary tournament. In the final, however, he was lights-out for Russia, ranking 3rd (behind two Frenchmen) in scoring with 63 points in 4 matches played, all while hitting 58.89%.

He scored a whopping 19 points in the gold medal match, leading all players, as Russia tore through France in a sweep. He led his team in kills, blocks, and aces in the final.

The 6’8″, 30-year old Mikhaylov has won no fewer than 8 MVP awards in his career, including 6 in the last 2 seasons for club and country:

Those honors come in addition to a number of other category awards – including best scorer and best spiker at the 2012 Olympic Games.

Unlike the women’s tournament, where MVP Michelle Bartsch-Hackley was also named to the 7-player dream team, Mikhaylov wasn’t ranked as the best  at his position. That honor went to American Matt Anderson, who played some time at outside hitter but finished at opposite in the United States’ 3-0 sweep of Brazil in the bronze medal match.

In taking that position, Anderson fended-off Stephen Boyer, who struggled in the final, but was the dominant player of the Final 6 until that point. Boyer had 75 points in total, including 64 kills, 8 blocks, and 3 aces. He hit even better than Mikhaylov at 59.81%, and while playing Anderson’s USA team in the semi-finals had 31 points on 25/38 kills, plus 3 blocks and 3 aces. His was the most surprising omission from the Dream Team.

Further emphasizing that this award focuses only on the Final 6, American Taylor Sander, who played just 3 games in the preliminary stages, found his way to the team as one of  two outside hitters. He was the USA’s 2nd-best scorer with 45 points, including 3 blocks and 4 aces, while hitting 56.72%. His return to the team after the birth of his child was crucial to the bronze medal run, especially after an injury to Thomas Jaeschke late in preliminary play. Sander was previously named best outside hitter (and MVP) at the 2014 World League. He was joined by 23-year old Russian Dmitry Volkov at the position – Volkov was also a best outside hitter of last year’s European Championships.

Jenia Grebennikov was named the best libero, after previously winning the award at the 2014 World Championships, 2016 World League, and in the most recent Champions League playing for his club Cucine Lube Civitanova.