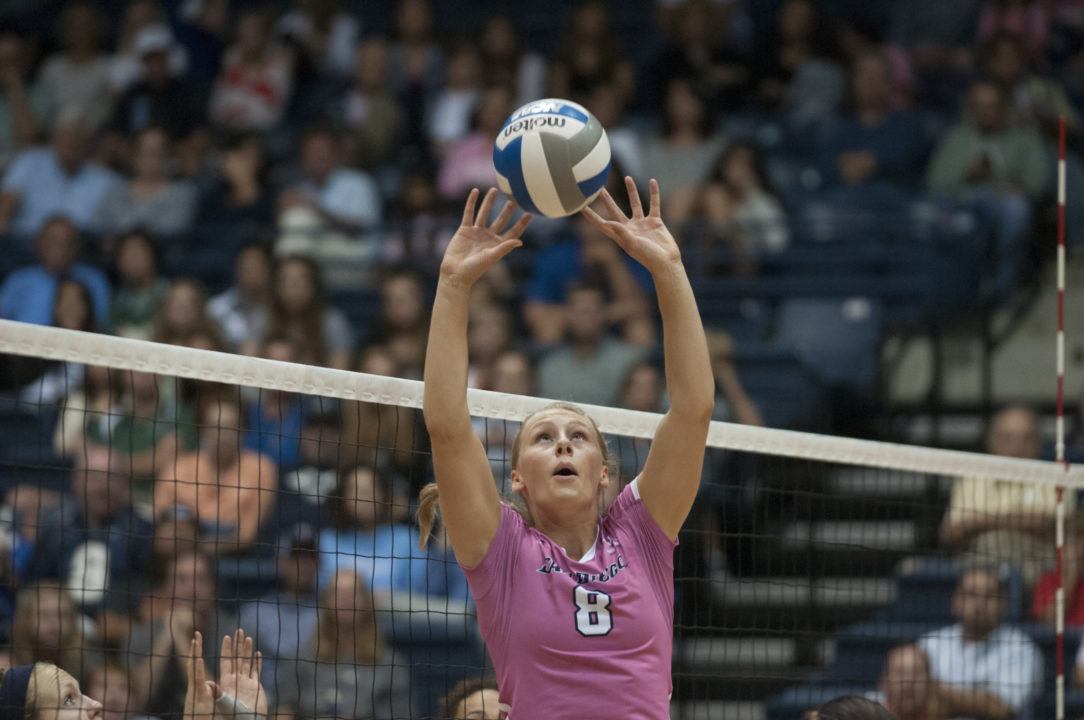 Press Release courtesy of the WCC

No. 7 BYU and No. 9 San Diego shared the 2017 West Coast Conference regular season title and both earned NCAA Tournament berths. The Cougars and Toreros each placed three on the All-WCC First Team and shared all major individual honors as announced by the conference office.

San Diego senior setter Kristen Gengenbacher was voted the 2017 Player of the Year. BYU sophomore libero Mary Lake secured WCC Defensive Player of the Year honors while teammate Kennedy Redding and San Diego’s Roxie Wiblin shared WCC Co-Freshman of the Year accolades. San Diego head coach Jennifer Petrie was selected as the Coach of the Year. All four major individual awards – including the all-conference and all-freshman teams – were voted on solely by the WCC’s 10 head coaches.

Gengenbacher ran one of the most efficient offenses in the country as the Toreros ranked in the top-25 in kills per set (5th/14.99, assists (3rd/14.17) and hitting percentage (23rd/.268). The senior led the conference and ranked 11th nationally in assists (11.66) overall and added 12.08 assists during conference play, distributing to five attackers averaging at least 2.0 kills per set during league action.

Lake is the third Cougar to capture Defensive Player of the Year honors and the first libero to do so since current AVP professional Betsi Metter won three straight honors (2011-13) for Loyola Marymount. Lake ranked second among conference leaders in digs (4.27) while keying one of the league’s top defensive units. In overall matches, Lake averaged 4.43 digs per set and earned WCC Player of the Week honors after back-to-back sweeps against Gonzaga and Portland, averaging 6.67 digs per set. Lake is the first BYU student-athlete to capture Defensive Player of the Year honors since middle blockers Whitney Young (2014) and Amy Boswell (2015).

Redding and Wiblin are the first freshmen to share Freshman of the Year honors since Santa Clara’s Krista Kelly and Saint Mary’s Megan York did so in 2007. A middle blocker, Redding ranked ninth among WCC leaders in attack percentage (.305) and was third in blocks (1.4) during league play to go along with 1.27 kills per set. An outside hitter, Wiblin ranked third on the Toreros with 2.57 kills and 1.65 digs per set during WCC play. Redding is the second straight BYU student-athlete (fourth overall) to capture top frosh honors, joining teammate McKenna Miller (2016). Wiblin is the first Torero named Freshman of the Year since All-American Chloe Ferrari did so in 2013.

This is the fifth WCC Coach of the Year honor for Jennifer Petrie, who propelled San Diego to a 14-match winning streak to end the regular season. The Toreros cracked the top-10 for the second straight year appearing at No. 9 in this week’s poll. Petrie is the second coach in WCC history to surpass 200 career triumphs and is 201-59 (.773) in 16 seasons at the helm.

BYU and San Diego dominated during the 2017 campaign and accounted for half of the 12-member first team. Santa Clara placed two on the first team, while Loyola Marymount, Pacific, Pepperdine and Portland each had one selected. No fewer than 10 first team selections are making their debuts on the list and only two members – Santa Clara’s Kirsten Mead and Portland’s Hannah Troutman – have made multiple first team appearances. The first team features eight upperclassmen, headlined by six seniors.

Both BYU and San Diego open play in the NCAA Tournament Friday, December 1. For the third straight season No. 7 BYU captured a No. 13 national seed and will host the first two rounds, opening against Patriot League champion American. No. 9 San Diego will travel to Los Angeles to compete in the first round at USC. The Toreros open against LSU Friday at the Galen Center.