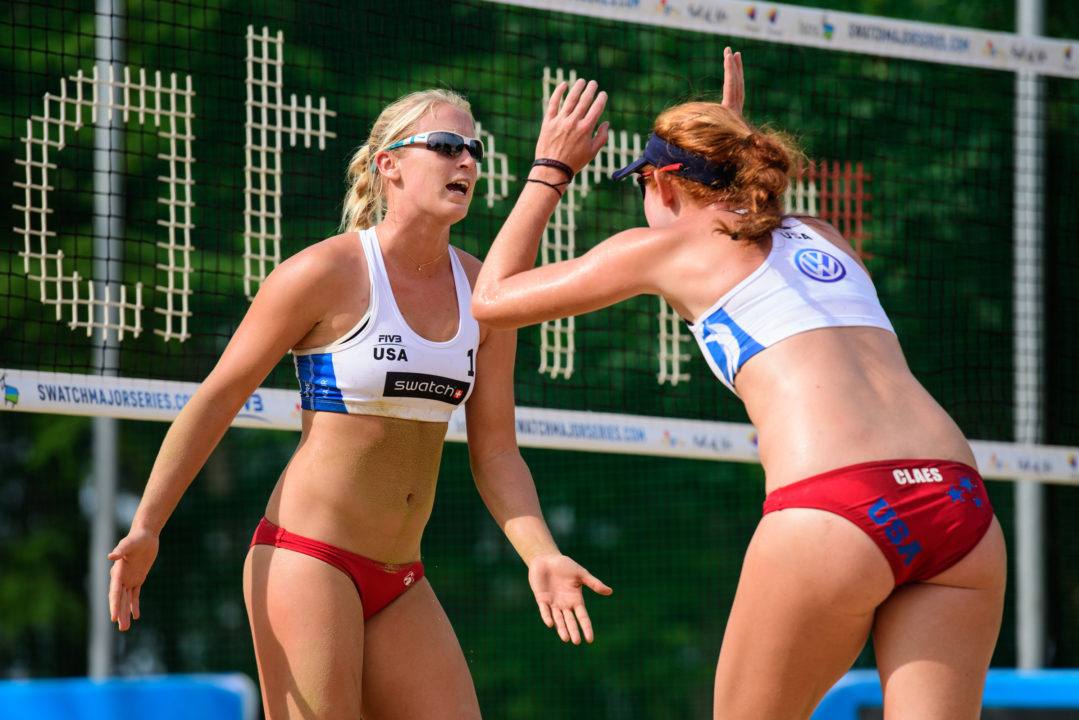 After splitting up with long time partner April Ross, Kerri Walsh Jennings sought out to find a replacement, she had her eyes set on collegiate star, Sara Hughes. Current Photo via FIVB

After splitting up with long time partner April Ross, Kerri Walsh Jennings sought out to find a replacement, she had her eyes set on collegiate star, Sara Hughes.

The three-time Olympian contacted Hughes several times throughout her senior season with USC to play with her in the 2017 season. Walsh Jennings even made the trip to Alabama to watch Hughes play at the NCAA championships. According to ESPN.com, Walsh Jennings went on the record to say “all I wanted to do was play with Hughes.”

Hughes, however, was not ready to commit to Walsh Jennings as she was committed to her team.

Hughes and partner Kelly Claes met as teenagers at a beach volleyball camp. This is where the partnership began as Hughes approached Claes about pairing together. The time came in their teenage years to choose a college, with Claes originally committing to Long Beach State to play indoor volleyball, but Hughes convinced her to come to USC to play beach volleyball instead. The rest is history. While at USC they helped the team to two-consecutive NCAA championships with a 53-1 record in their senior season.

When it came down to it for Hughes, she believed in her partnership with Claes. The two have their sights aimed at the 2020 Tokyo Olympic Games.

This is not the first time the childhood friends have been torn between a big name coming their way to partner up, as fellow American Phil Dalhausser faced the same dilemma. When approached in 2005 by 2000 Olympic champion Dain Clanton to play, Dalhausser made the same decision as Hughes did, to stay with his partner Nick Lucena. Though, when asked by Todd Rodgers, he took the chance and partnered with Rodgers.

Dalhausser made the comment that Hughes should have taken Walsh Jennings offers and Claes partner with Ross, saying that they would have learned so much by partnering with such experienced players.

You can watch Hughes and Claes at the FIVB Beach World Championships this week, as they are now 2-1 in pool play, advancing to the Round of 32 which will begin on August 2.