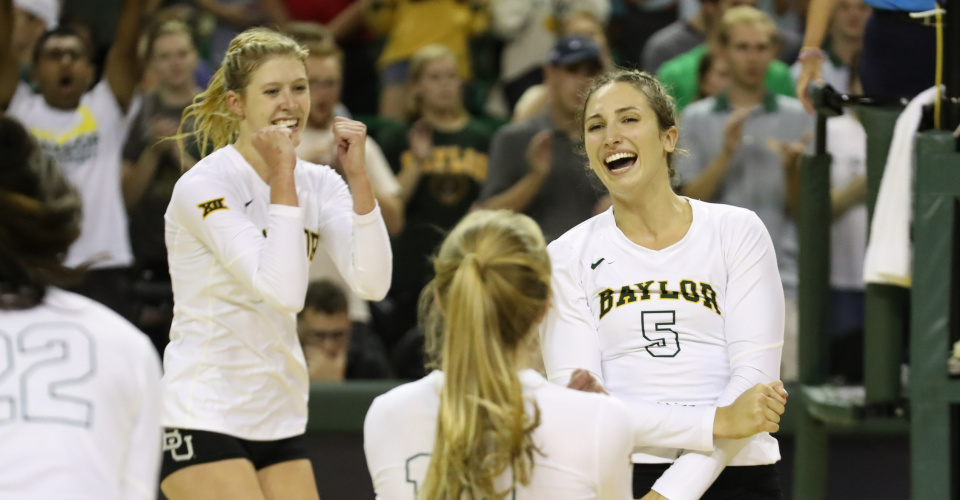 This is the first of a two-part series of scouting reports focusing on the Big 12 match-up between #19 Iowa State visiting #18 Baylor. Current Photo via Baylor Athletics

This is the first of a two-part series where we go in-depth for key matches during each week of the regular season. This SR focuses on #19 Iowa State visiting #18 Baylor in an important match-up of Big 12 teams. Baylor is currently 19-5 and 9-2 in Big 12 play, while Iowa State is 17-4 and 7-3 in Big 12 play. Baylor already owns a sweep of Iowa State in Ames earlier this season.

Currently, Baylor stands alone in the Big 12 with a half-game lead on Kansas. Unfortunately, Baylor also owns a loss to Kansas, a sweep at home on October 18. Baylor would need to win out to hopefully earn the right to host on the first weekend of the NCAA tournament. Iowa State, on the other hand, can comfortably say they will make the NCAA tournament, barring any major collapse. Iowa State’s NCAA RPI is currently 14 (as of matches played through October 29), and another loss to Baylor (RPI: 26) would all but eliminate the Cyclones’ chances of hosting the first two rounds of the NCAA tournament come December.

Iowa State prides itself on a well-balanced offense. Their top four attackers on the season are separated by less than a kill per set and account for 11 kills per set overall. Four offensive options are hard to account for simultaneously. However, in their loss at home in straight sets to Baylor back on October 4, only one player (Jess Schaben) hit double-digit kills with 10. No other player had more than 6, and the team averaged a mere 9.33 kills per set (the Cyclones normally average north of 17 kills per set). If the offense becomes predictable, you don’t have to stop anyone in particular, you just need to eliminate their ability to terminate.

You know you said it out loud. All kidding aside, Iowa State needs to put their focus on defense at all costs. The Cyclones are also second in the Big 12 in blocking (3.01 per set) only to Texas, and almost a full block better than Baylor. (Receiving serve could probably be lumped into this category, since the Cyclones average less than an ace allowed per set.) Our focus will be on the Big 12’s leader in digs per set, at over 17.5 per set. They also lead the conference in opponent’s hitting percentage, at .150 this season. Hali Hillegas, the conference’s leader in digs per set at well over 5 was the lone bright spot in their previous loss to Baylor. She kept to her average of 5 digs per set, and received a huge portion of serves. She can shoulder the load. The question remains; can the rest of the Cyclones give Hillegas some help?

Katie Staiger (4.27) and Yossiana Pressley (3.17) are the Bears’ studs. Everyone knows this. The advantage is that they will be playing at home in front of a raucous crowd in Waco. In the previous match, Iowa State found a way to halt Staiger’s attack (-.042 against Iowa State the first time), but failed to keep the rest of the Bears in check (Shelly Fanning careered with 14 kills and hit .500). One could add hitting efficiency and the Bears’ ability to terminate quickly; as a team, Baylor hits a full 40 points better in hitting percentage (.273-.232) and almost a full kill better per set (14.53-13.61).

Baylor has the hammers. But they defend well too. Baylor holds opponents to a .151 hitting percentage, virtually the same as ISU. They also average less than an ace allowed per set, so the serve receive is there.

I will not place a prediction here. This match-up is too close, and these two teams have change a bit since their first match three weeks ago. However, Iowa State has the blocking advantage (nearly a block better per set) and a digging advantage (almost 2 digs per set better), and goads teams into multiple swings per rally. For a team like Baylor, who’s used to terminating immediately, the frustration of having to defend consistently over time might be the key to slowing Baylor down.