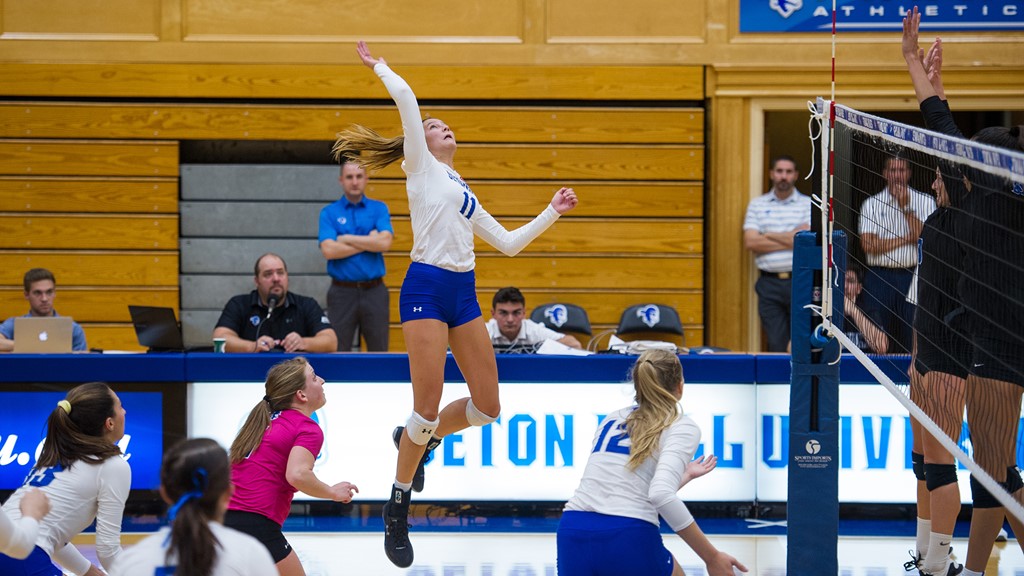 Thelen was magnificent, connecting at a .500 attack percentage, while Seton Hall as a team registered a season-high .310.  The victory moves the Pirates over the .500 mark in BIG EAST play at 3-2.

SET 1:
With Seton Hall clinging to an early 9-8 lead, it went on a 6-1 run to jump out to a sizeable 15-9 advantage, and never looked back.  A kill by Caitlin Koska (Franklin, Wis.) put the Pirates up by seven points, 21-14, a margin that was also reflected in the final score, 25-18.  The Pirates spread the ball around in set one, with five players recording two kills.

SET 2:
After putting forth a strong effort in the first set, The Hall was disappointing in the second.  Georgetown raced out to a 13-5 lead, which prompted the Pirates to take an early second timeout.  From there, they played “catch-up” for the remainder of the set before eventually falling, 25-17.  Despite having a season-best hitting percentage for the match, the Pirates managed only a .069 mark in set two.

SET 3:
The Pirates roared back in set three, thanks in large part to Thelen’s seven kills.  It was the closest set of the match, featuring nine ties, but The Hall took control late.  With the score tied at 16, the Pirates scored five of the next six points to grab a 21-17 lead.  A kill by Thelen put Seton Hall in set point, 24-20, and a Hoya service error ended set three, 25-20.

SET 4:
Two sets after having one of their worst sets of the season, the Pirates put forth one of their best in set four.  Leading 12-11, The Hall went on a 10-2 run, and a service ace by Dominique Mason (Chicago, Ill.) gave it a commanding 22-13 advantage.  From there, the Pirates cruised to a 25-16 set four win, and 3-1 match victory.  Mason had six kills in set four alone, and contributed to an impressive .583 attack percentage in the match-clinching set.

Up Next:
The Pirates will return to action on Friday, October 6 when they travel to Cincinnati for a match at Xavier.  Match time is scheduled for 7:00 p.m. ET.

Kenzie Higareda (Woodbridge, Va./Forest Park) and Margo Pivonka (Broadview Heights, Ohio/Walsh Jesuit) both had eight digs for the Blue & Gray while Werztberger was credited with a career-high four blocks.

With both teams keeping pace to open the first set, Seton Hall (9-9, 3-2 BIG EAST) took the early advantage in the match behind a 6-1 run to take a 15-9 lead. The Hoyas wouldn’t be able to overcome the deficit en route to a 25-18 Pirate victory in the stanza.

Georgetown flipped the script in the second, going ahead by scores of 7-3 and 13-5 to burn both of SHU’s timeouts. The Pirates would manage to pull within four points, down 15-11, but couldn’t make up enough ground as GU evened the match at 1-1 with the 25-17 set victory. Wertzberger and Speech both tallied four kills in the set while three other Hoyas notched a pair.

The third set was the most competitive of the night, featuring a combined 11 ties and lead changes throughout. Seton Hall took an early 4-1 lead before the Hoyas battled back to knot things up at 4-4 on a solo block from Wertzberger. Tied up at 16-16, the Pirates used a 5-1 run to lead 21-17 and would go ahead 23-19 to force GU’s final timeout. Coming out of the huddle, SHU closed out the frame 25-21 to take a 2-1 overall lead.

Another close start in the fourth saw a 7-7 tie behind a Sinnette kill but Seton Hall would later put together runs of 5-2 and 7-1 to lead 22-14 and put the set out of reach en route to the 25-16 win in the deciding set.

Georgetown returns to action on Saturday as it heads back to the friendly confines of McDonough Arena to host Villanova in BIG EAST play. First serve is set for 6 p.m. on the Hilltop.