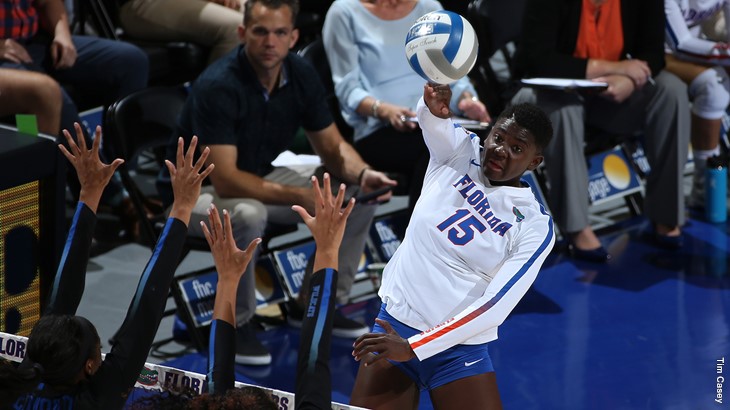 Shainah Joseph hit .515 on 19 kills in leading Florida to a 3-1 win over Miami (FL) and a Sweet 16 appearance. Archive Photo via Tim Casey/Florida Athletics

A year after falling to an in-state opponent in the second round, #2 Florida got redemption by downing Miami (FL) in four sets to advance to the Sweet 16.

One day after holding Alabama State to just 31 total points, Florida once again flexed its muscle early on as they blitzed Miami (FL) to a 25-14 first set victory. The Hurricanes didn’t let that happen in the second and took an early 8-3 lead while the Gators slowly inched back. They pulled to within one at 12-11, but couldn’t get over the hump and Miami (FL) pulled further ahead at 25-19 to even things 1-1 in sets after ACC Player of the Year Olga Strantzali (20 kills, .415, 10 digs) laid down the final kill.

The fourth was a mix of both teams playing well, as the score bounced back-and-forth. Miami (FL) actually held a 16-12 advantage, but a 5-0 run that featured two Rhamat Alhassan (nine kills, .692, five blocks) kills flipped the script. Things remained tight and sure enough Strantzali and Joseph were the two to come up with late kills. However, Joseph had two to Strantzali’s one, as the Gators just finished things off 25-23.

It’s the third Sweet 16 for the Gators senior class, who are now one win away from making their third Elite Eight. They’ll await their opponent as it will come from the UCLA regional with that second round match tomorrow.