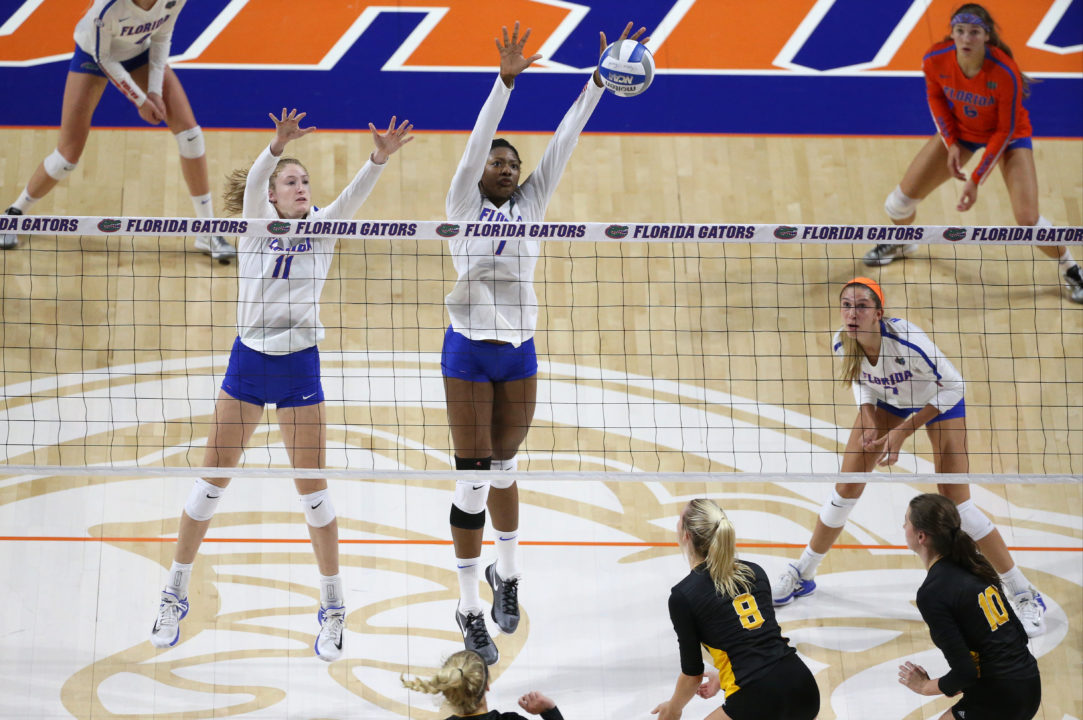 Check out our breakdown of all four pods in the Gainesville regional that includes team bios and pod predictions. Archive Photo via UAA Communications photo by Tim Casey

Although two Florida wins are required for the Gators to truly host the Sweet 16 and Elite Eight, this region is dubbed the Gainesville Regional with Florida as the highest ranked team. Their ranking allows them to host through the entire region should they keep winning, but for rounds one and two, three other schools join them in hosting.

Below are individual pod breakdowns of that quartet of groups in the first and second round, featuring team bios as well as predictions for the matches that come this week.

How They Got Here: Florida (25-1, 17-1 SEC) earned an automatic berth after winning the tiebreaker with co-SEC champion Kentucky.

Stat Leaders: Carli Snyder paces the offense with 3.49 kills per set and is followed by Rachael Kramer (2.93) and Rhamat Alhassan (2.74). In total five players have triple digit kills with four over 200, as Kramer has been the most efficient at .431 with Alhassan at .387.

From a serving standpoint, Snyder has 45 aces, more than double anyone else on the team. Defensively, Caroline Knop (4.66 digs per set) covers the back row with Alhassan (1.80 blocks per set), Huskey (1.15 blocks per set) and Kramer (1.12 blocks per set) all above a block per set.

How They Got Here: Alabama State (28-10, 18-0 SWAC) won both regular and postseason championships in the SWAC to earn the automatic bid.

Stat Leaders: Ni’yesha Brown has 100 more kills than anyone else and a team-best 3.19 kills per set as three others notch two or more per game. Briana Dorsey ranks second in that regard with 2.47 kills per set, but also is the team’s most efficient hitter at .409.

On the defensive side of the net, Asha Daniels has a team best 3.62 digs per set while Briana Dorsey is the closest to a block per set at 0.98.

Miami (FL) vs. College of Charleston

NCAA History: Ninth NCAA Tournament appearance and first since 2015; Has never made the second weekend

Stat Leaders: Olga Strantzali carried the majority of the offense en route to ACC Player of the Year as she notched a team-best 4.56 kills per set while hitting .275. Kolby Bird is second at 3.35 per kills.

Unlike the first two teams mentioned in the bracket, the Hurricanes run a 5-1 (or 6-1 depending on your lingo) as Haley Templeton (10.73 assists per set) facilitates and plays six rotations with a well-balanced game (2.25 digs per set, 0.51 blocks per set).

The only players with more digs per set than Templeton are Strantzali (2.37) and libero Sylvia Hernandez (3.99) while the Hurricanes don’t have a standout blocker but are led by Lucia Pampana (78 total blocks, 0.87 per set).

Allison Beckman is the lone setter in the 5-1 to lead that offense with 11.25 assists per set. She’s also part of an efficient serving team that isn’t necessarily ultra aggressive as she has 18 aces to 12 serve errors (127/91 as a team).

Defensively, McKala Rhodes (4.59 digs per set) gobbles up almost two more digs than anyone else. At the front of the net, Jane Feddersen (1.08) is the lone Cougars player over a block per set.

The Bruins utilize one setter in Loyola Marymount senior transfer Sarah Sponcil, who averages 11.27 assists per set. She was an outside hitter before her time with UCLA though, so is plenty versatile with 3.18 digs per set and 0.55 blocks per set as well.

Speaking of defense, only libero Zana Muno (4.94 digs per set) logs more digs than Sponcil, while Gates (1.23) is the top performer in blocks per set.

How They Got Here: Austin Peay (30-5, 14-2 OVC) earned an automatic bid by winning the Ohio Valley Conference tournament.

Stat Leaders: A trio of Governors are over 200 kills, led by Ashley Slay (3.69 per set) who also hits at a high .302 clip. Kaylee Taff was next in efficiency at .280, although she is sixth in kills per set. Kristen Stucker is the lone setter for Austin Peay and paces the offense with 11.54 assists per set.

Defensively, Ginny Gerig (3.79) and Allie O’Reilly (3.58) lead the back row in digs with Taff (0.80) the best blocks per set mark even though Slay has more total blocks.

How They Got Here: Denver (23-5, 12-2 Summit) earned an automatic bid by winning the Summit League Tournament.

Stat Leaders: Becca Latham is both the leader in kills per set (3.23) and hitting percentage (.353) on an offense with six players at over 1.3 kills per set.

Stat Leaders: Sisters Torrey Van Winden (4.69 kills per set) and Adlee Van Winden (3.38 kills per set) lead the way for the Cal Poly offense on the year. There’s plenty of efficiency to go around too, as Torrey hits .343 with Adlee at .262, but those marks sit behind Savannah Niemen (.398, 2.15 kills per set).

Taylor Nelson also hits at a high clip (.386), but it comes from dumps and slides, as the lone setter for the Mustangs posts 11.90 assists per set.

On the other end of things, Katherine Brouker (3.95 digs per set) is the leader in digs with a trio of others at two or more digs per set. They don’t have a great blocking team as Niemen posts a team-best 0.63 blocks per set.

How They Got Here: Minnesota (26-5, 15-5 Big Ten) earned an at-large bid after finishing third in the Big Ten standings.

Stat Leaders: A pair of Golden Gophers carry most of the offensive load in Stephanie Samedy (4.14 kills per set) and Alexis Hart (3.73 kills per set). While both hit efficiently (.312, .281 respectively), Molly Lohman (.380) and Regan Pittman (.343) have stepped up in their swings at the highest rates.

That offense is fueled by an All-American setter in a 5-1/6-1 system, as Samantha Seliger-Swenson notches 12.24 assists per set. She’s also the team leader in aces at 32.

How They Got Here: North Dakota (30-7, 12-4 Big Sky) earned an automatic bid by winning the Big Sky Tournament.

How They Got Here: Northern Iowa (26-8, 15-3 MVC) earned an at-large bid after finishing second in the Missouri Valley Conference.

Stat Leaders: A trio of Panthers average over three kills per set in Piper Thomas (3.99), Karlie Taylor (3.83) and Bri Weber (3.27). Thomas has also been hitting at a high rate with a .362 hitting percentage.

Defensively, Northern Iowa has a mantra of being stingy with everyone pitching in. Kendyl Sorge (4.74 digs per set) leads the way, but Weber (3.89 digs per set) and Taylor (3.59 digs per set) notch plenty as well. For players who consistently play, Thomas (0.92) is the teams best blocker by a strong distance.

How They Got Here: Louisville (24-6, 18-2 ACC) earned an automatic bid by winning the tiebreaker as co-ACC Champions with Pittsburgh.

Stat Leaders: Melanie McHenry has been the top option on offense with 400 kills (3.60 per set) with three others over two kills per game. Jasmine Bennett (2.05) is part of that group, and is the most efficient with a .330 hitting percentage.

In a 5-1/6-1, Wilma Rivera is the lone setter for the Cardinals system and leads the team with 10.66 assists per set. She also has a team-high 36 assists.

Rivera is also second on the team in digs (2.91 per set), as Molly Sauer (4.11 digs per set) is the leader in that clubhouse. Maggie DeJong (1.15 blocks per set) has also been the team’s best blocker.

Stat Leaders: Four Trojans average over two kills per set, led by Khalia Lanier (4.10) and Brittany Abercrombie (3.15). Abercrombie is also hitting .289, which is only trumped by Jordan Dunn (.363) for players who consistently play.

That offense is ignited by a two-setter system with Reni Meyer-Whalley (6.19 assists per set) and Cindy Marina (5.25 assists per set) in charge. Marina also contributes heavily in the serve game with 28 aces, second on the team to only Lanier (34).

How They Got Here: Central Arkansas (27-4, 13-3 Southland) earned an automatic berth by winning the Southland Conference tournament.

The distributor for those terminators is Elizabeth Armstrong (10.63 assists per set), who plays a versatile game in six rotations. As part of that, she has 21 aces on a team that is led by Nash (37) that has the same amount of aces as serve errors.

How They Got Here: San Diego (24-4, 17-1 WCC) earned an automatic bid by winning the tiebreaker as co-WCC champions with BYU

The setter initiating the attack is Kristen Gengenbacher, who is averaging 11.66 assists per set. She’s also second on the team with 2.63 digs per set.

Speaking of digging up attacks, Lizzy Tardieu is the team leader in that category with 4.06 per set. Staying on the defensive end, Picha has just less than double the amount of blocks of anyone else with 114 (1.31 per set).

Another who ranks higher is Anna Zwiebel, the team’s setter who is hitting .352 on 145 attempts. She also averages a team-best 9.68 assists per set.