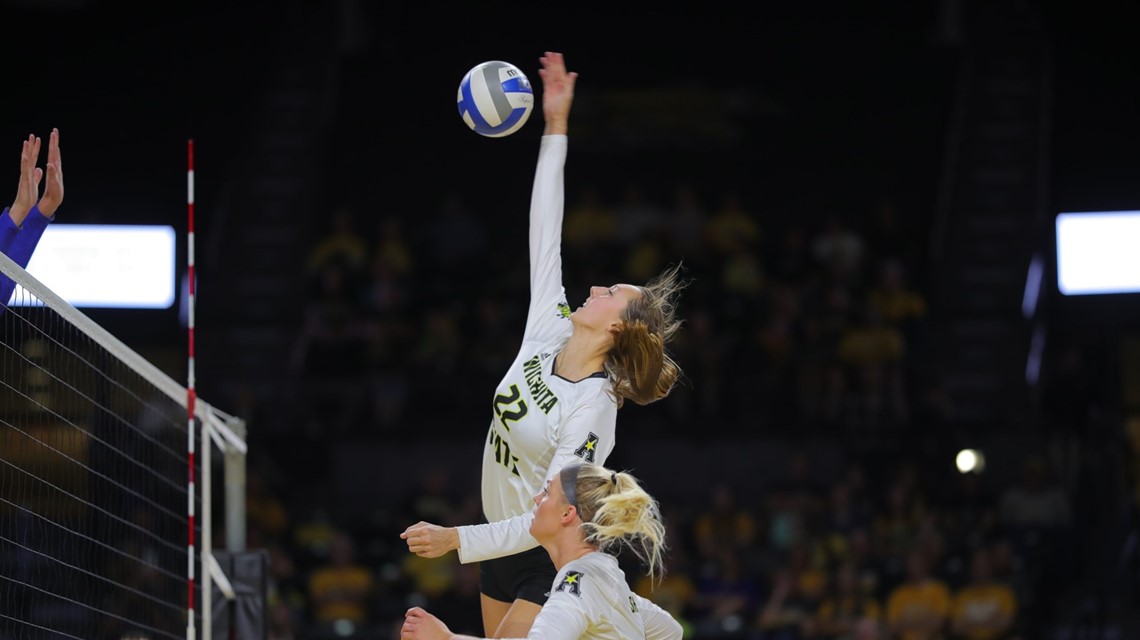 MEMPHIS – The No. 24 Shockers made just eight hitting errors as  a team en route to a .457 hitting effort in a sweep of Memphis on Wednesday to remain undefeated at 19-0 in American Athletic Conference action.

Senior middle blocker Abbie Lehman and senior outside hitter Mikaela Raudsepp turned in double-digit kill efforts with 16 and 14 respectively, each hitting at a .500 or better clip, to lead the way for WSU. Lehman had an errorless effort in 23 swings, hitting at a .696 clip, while notching a team-best five blocks. Junior outside Tabitha Brown followed with nine kills and three blocks. Senior libero Gabi Mostrom and redshirt freshman defensive specialist Giorgia Civita pulled up 12 digs apiece to pace the Shocker defense.

Memphis led 8-6 with help from two kills each by Lowe and Hannah Flowers. Wichita State rallied with  eight of the next nine points, with two kills and an ace by Raudsepp and putaways by three others players, vaulting ahead 14-9. Memphis cut the margin to two at 18-16, but the Shockers closed out the stanza on a 7-2 run. Two kills and a block by Raudsepp lifted WSU to a 24-17 advantage and a service error clinched the 25-18 win.

Wichita State broke a 5-all tie in Set 2 with a 5-0 run, incluidng four straight Raudsepp putaways. Another run of five-straight points lifted the Shocker edge to 10 at 18-8 with Lehman carrying the load with three blocks and two kills. A hitting error stopped the run, but WSU picked back up with a 6-0 run to earn a set-point try at 24-9. Four different players tallied kills in the run. A Lowe kill against slowed the Shockers momentarily, before Brown capped the set at 25-10.

The teams were level at 6 in Set 3, before Wichita State used an 7-1 run, including four Memphis miscues, to go up six at 13-7. The teams split the next six points, before the Shockers upped the margin to 10 at 22-12 with a 6-2 run, including two kills and a block by Brown. Kadiku and Kelsea Bivins notched kills for Memphis to cut the margin to eight, but Brooke Smith and Alex Koon responded for Wichita State to give the team a match-point try at 24-14. A service error two points later ended the afternoon.

Abbie Lehman led the Shockers with 16 kills and five blocks, while hitting .696. Mikaela Raudsepp had 14 kills and hit .500. Emily Hiebert had 38 assists, while Giorgia Civita and Gabi Mostrom each had 12 digs.

SET 1:
• The Shockers pulled away for a 25-18 win in the first set
• Memphis took an early 8-6 lead after a service ace
• The Shockers used four-straight kills to go in front 10-8
• A Lehman kill gave WSU a 16-11 lead and Civita’s service ace pushed the lead to 22-16
• WSU won the set 25-18 on a Memphis service error
• Raudsepp had seven kills in the set, while Lehman had six kills
• Hiebert had 14 assists and Civita had seven digs
• During the set, Civita set the season record for digs by a freshman

NEXT MATCH:
• The Shockers close out the regular-season on Fri., Nov. 24 against Memphis at 12 p.m. inside Charles Koch Arena