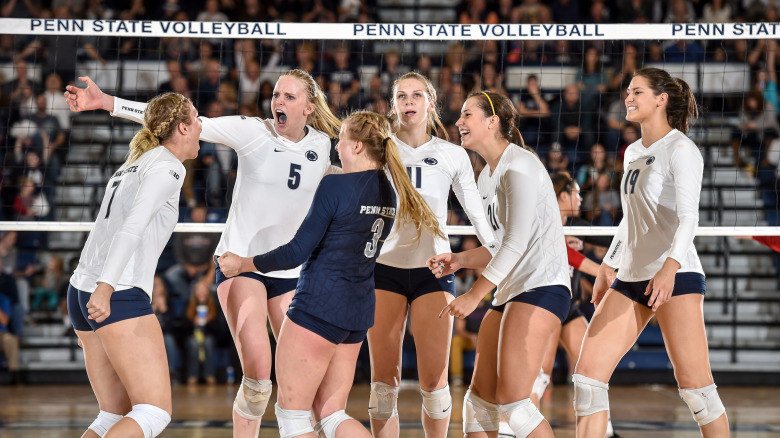 A day after dropping their first match of the year, the #2 ranked Penn State Nittany Lions bounced back, pulling out a hard fought victory over the visiting Iowa Hawkeyes in four sets. Set scores were 25-13, 25-19, 23-25, and 25-17. Simone Lee led the Nittany Lions with 22 kills, while Haleigh Washington and Ali Frantti chipped in 12 and 10 kills respectively. Abby Detering had a strong all around match as she dished out 28 assists to go along with 10 digs, 5 blocks and 4 aces. The Nittany Lions outhit the Hawkeyes .366 – .201 on the match. Penn State improves to 11-1 (1-1 Big Ten) on the year and will return to the court when they host Illinois on September 29th.

Set one was close early on, but the Nittany Lions used a strong, diverse offense to run away with the set late. Lee’s fourth kill ended the dominating set for Penn State.

Iowa played much stronger early on in set two, as a kill from Taylor Louis tied the score at 12. The Nittany Lions responded with a 4-0 to take control of the set. Lee’s 10th kill of the match closed out the second set for Penn State as they ran off a 6-1 run late.

Set three started with Iowa taking an early 7-4 lead on a kill from Jess Janota, but Penn State stormed back, using a 4-0 to retake the lead. The Nittany Lions maintained a small lead until Louis knocked down her 12th kill to give the Hawkeyes a 19-18 lead, forcing a timeout from Penn State. A Nittany Lion service error followed by a kill from Kelsey O’Neill brought up two set points for the Hawkeyes, who finished the set on the 13th kill of the night from Claire Sheehan.

Penn State grabbed the first two point lead of the fourth set at 10-8 on a kill from Lee. Washington’s 10th kill grew the lead to 15-12, forcing a timeout from Iowa. The Nittany Lions lead ballooned to five on a kill from Detering, and they never looked back, finishing the match on a kill from Washington.

Louis led the Hawkeyes with 17 kills while Sheehan chipped in 14. Gabrielle Orr dished out 45 assists for Iowa who dropped to 12-3 (1-1 Big Ten) on the year. They will return to action on September 29th when they host Wisconsin.