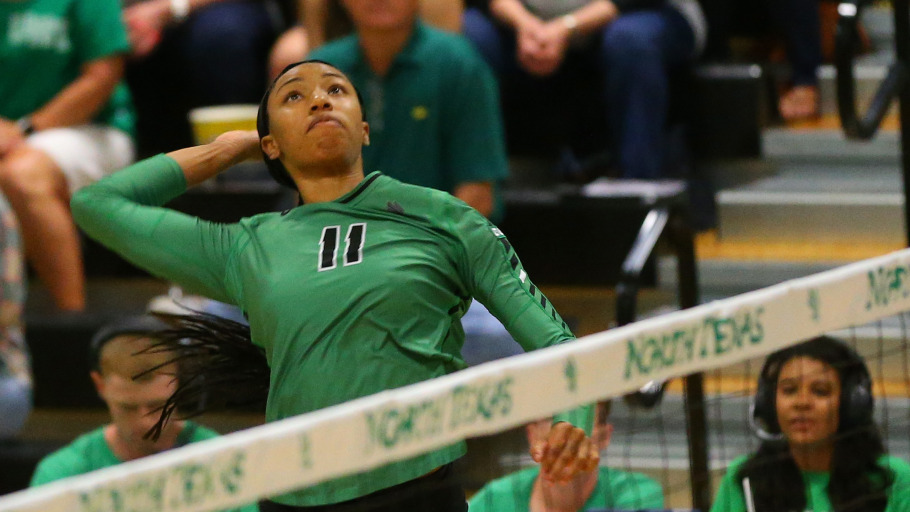 Conference USA has announced the 2017 Volleyball All-Conference and All-Freshman teams to signal the conclusion of the regular-season slate. Current Photo via Rick Yeatts

The Mean Green holds the No. 1 seed for the C-USA Volleyball Championship this week on the heels of a 13-1 mark in league action, 26-2 overall. Six North Texas names bolster this season’s all-conference list, including three first-team winners. Senior Amanda Chamberlain proved to be an integral piece to her squad’s success as the leader in kills (318) and blocks (108), with her current .477 hitting percentage ranking second in the nation. Holly Milam crafted a knockout senior year as the only player in North Texas history to compile 1,000 kills, 600 digs and 250 blocks in a career. Karley York is second in the league with 11.81 assists per set behind the nation’s leader in Florida Atlantic’s Ivone Martinez. The junior also collected two C-USA Setter of the Week honors. Senior Alexis Wright appeared on the second team, most recently claiming the league’s Offensive Player of the Week for her effort in helping the Mean Green take down (RV) WKU in a five-set thriller that clinched the program’s first regular-season conference title in history. She’s played in 96 sets, averaging 2.39 kills and 0.68 blocks per frame. Barbara Teakell was a dynamic force for North Texas in her first season and took home the all-freshman nod to add to her pair of C-USA Freshman of the Week awards. Teakell filled the stats sheet throughout the year with 231 kills, 157 digs and 26 blocks through 85 sets.

C-USA Regular Season Co-Champion WKU earned four all-conference selections following a historic year that gave it its fourth-consecutive C-USA regular-season championship, the first program in league history to do so. The Lady Toppers finished the year 13-1 and 27-3, once claiming 21-straight matches. The streak marked the second-longest in both school history and in the nation at that time. Jessica Lucas has earned all-conference first team recognition every year of her career, and the accolades don’t stop there. For her remarkable facilitating effort, the senior now owns the conference’s record for career weekly awards with 18. Lucas is also a C-USA All-Academic Team member and one of 10 finalists for the prestigious Senior CLASS Award. Alyssa Cavanaugh is another familiar face for all-conference merit, earning her fourth first-team title in a row. The senior was known for her offensive prowess this season, leading the league in kills (408) with an efficient .381 hitting percentage. Rachel Anderson is a well-deserved first-team honoree for the second-consecutive year as she ranks in the conference’s top-10 in kills, hitting percentage and blocks. Sydney Engle rounds out WKU’s all-conference clip, also recently picking up a 2017 all-academic nod. The senior’s .344 attack percentage ranks eighth across the league and now owns three-straight second team awards.

Rice compiled an 11-3 conference mark and a 21-7 overall record, including a program-record nine five-set victories. The Owls led the way with six all-conference selections spread among each team.

Sophomore Grace Morgan was the lone first-team pick as a three-time C-USA weekly award winner, one offensive and two defensive nods. Morgan holds the sixth-best blocks (117) and hitting percentage (.360) in the league. Second-team selection Lee Ann Cunningham surpassed 1,000 career digs in just her second season. Cunningham is one of just six sophomores in the nation with 1,000 or more digs. Madison McDaniel has averaged 10.70 assists per set, good for fifth in the conference and two league Setter of the Week honors. Portia Okafor garnered her third-straight second-team recognition in her final year. She ranks second among all Owls in blocks, third in points and fourth in kills. Freshman Nicole Lennon holds a place on the second team and all-freshman team for her breakout season which earned her four Freshman of the Week awards. She leads Rice with 14 double-doubles on the year, most recently with a standout 23-kill, 24-dig performance in the regular season finale.

Charlotte’s Yumi Garcia was named to the first team as the 49ers’ all-time single-season digs leader. Her 600 at a clip of 5.31 per set leads the conference. Tatyana Thomas and Janell Sparks were placed on the second team. Sparks is the team’s most productive killer (365, 3.61/set) and ties all-freshman selection Sydney Rowan with 397.5 points. Thomas’ .404 hitting percentage ranks third in the league and her 144 blocks tops all players.

Florida Atlantic had four players selected to teams following its 18-8 season, including nine C-USA victories and the No. 5 seed in the tournament. Sigourney Kame had a year worthy of first-team recognition. She had the league’s third-most kills per set at 3.89. The Owls’ leading blocker Abbi Reid joins setter Martinez on the second team. Sydney Nemtuda was placed on the all-freshman team after gathering triple-digit kills, points, digs and two C-USA Freshman of the Week nods.

Southern Miss notched a trio of winners spread to each team. Sarah Bell earned first-team honors for her setting abilities with a league third-best 11.23/set. Kylie Grandy was chosen to the second team as she started all 30 sets and led the Golden Eagles in points, kills and service aces. Chandler Marshall claimed the all-freshman recognition with 106 frames played, 3.11 kills and 3.42 points per set.

Madison Hill and Addisyn Rowe represent Marshall on the first team and all-freshman teams, respectively. Hill started 21 matches and is second among her teammates in points, kills and third in blocks. Rowe owns a team-best 94 blocks through 94 sets.

UTSA saw Marijeta Runjic selected to the first team as she leads her team, fourth in C-USA, with 3.66 kills per set and an Offensive Player of the Week clip. Hannah Froeschl was an all-freshman pick who amassed 47 blocks and 140 kills to go with 165 points.

Louisiana Tech and UTEP each had one selection each. Marta Monne was picked to the second team as she led in kills (320), points (350) and ranked second in digs (282). Miner Macey Austin joins her after averaging 3.45 kills per set, good for ninth in the league.