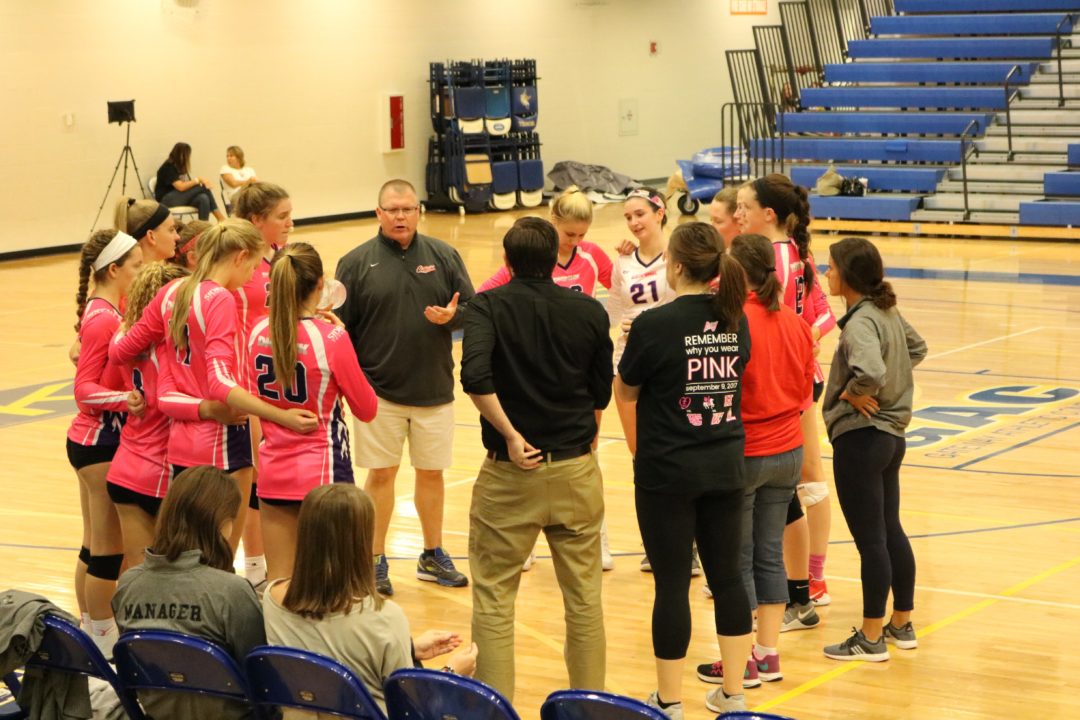 The Side-Out Foundation is a non-profit organization that raises money for late-stage metastatic breast cancer research through volleyball-themed fundraisers, including its Dig Pink fundraisers. On September 6th, 2018, the organization will host the 3rd annual edition of one of those events, the Dig Pink Challenge by All Volleyball, which will feature a matchup between St. Joseph’s Academy and Cor Jesu Academy in St. Louis: two of the city’s best high school programs.

Last year, The Susan G. Komen Foundation (not affiliated with Dig Pink) projected that more 266,000 people would be diagnosed with breast cancer in 2018 and more than 40,000 would die from the invasive disease. Breast cancer, in varying degrees, affects nearly everyone at some level or another.

But as the disease spreads to impact more lives, so does the resistance and the research done to try to cure it—and the sport of volleyball is trying to do its part.

In the inaugural event in 2016, a match between Lafayette and Marquette High School, the challenge raised a record $34,968.

Cor Jesu head coach Keith Price, who has seen the impact of breast cancer on friends, said that he jumped at the opportunity to participate the last two years.

“When I became head coach, it was important for me and the program to get involved doing awareness, so when we were asked, I jumped on it,” Price said. “It didn’t raise the money we wanted, so we were excited to participate again in it this year.”

As one of the top two teams in the St. Louis area, Cor Jesu returns to the Dig Pink Challenge for the second consecutive year. The Chargers will square off against the defending Class 4 State champion, St. Joseph’s Academy (SJA) Angels.

St. Joseph’s Academy head coach Katie Richardson said that she had tried to get her team involved in the event in the past, but scheduling conflicts prevented them before this season.

“This is something I’ve wanted to organize for a number of years. I sought it out a few years ago, but we couldn’t find another team to work out a date with,” Richardson said. “But this year, we teamed up with Cor Jesu. I’m really excited about it. I coach at a private, all girls’ school, so the importance of breast cancer awareness for young women is huge.”

St. Joseph’s Academy, currently 0-1 this season after dropping a 2-1 decision to Lafayette, will take on Edwardsville Wednesday night prior to the Dig Pink Challenge.

Cor Jesu will put its 2-0 record on the line in the match. The Chargers have opened their season with wins over Eureka and Mehlville High School.

The two schools did meet earlier in a preseason event, the SJA Jamboree on Aug. 17 where St. Joseph’s took a win. But regardless of the result, Price said his team’s focus remains on improving every day and preparing for the playoffs in October.

“We talk a lot about every time we’re on the floor, we get better, either practice or in match,” Price said. “We’re building one day at a time and concentrating on getting better.”

The Dig Pink Challenge by All Volleyball will take place at 5:30 p.m. C.T. Thursday, Sept. 6 at St. Joseph’s Academy in St. Louis, MO.