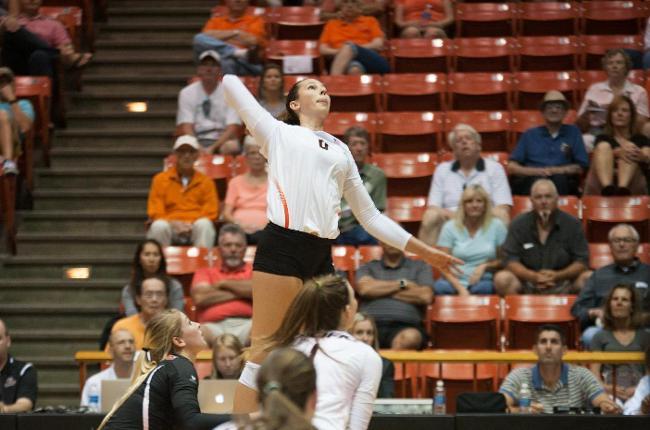 No. 12 Stanford swept Pacific, hitting for .355, while holding Pacific to a .179 hitting percentage.

Redshirt junior outside hitter Ivana Vanjak led the team with 10 kills and just one error on 19 swings to hit .474. Freshman outside hitter Michaela Keefe, who earned her second straight start, finished with career-highs of eight kills and 13 digs.

Stanford opened the match with a 7-2 lead in the first before the Tigers battled back to tie it 13-13. In total, there were six tie scores and five lead changes in the first until the Cardinal outscored the Tigers 8-4 down the stretch. Stanford never trailed in the second or third sets.

Up next, Stanford opens Pac-12 play on the road at Bay Area rival California on Tuesday, Sept. 20. First serve is scheduled for 7 p.m. on Pac-12 Network.

The Tigers split their action in the WCC/Pac-12 Challenge, after sweeping Cal Friday. Pacific’s bid for a 225th program win over a ranked team fell short in their third attempt this season. Pacific falls to 6-6 on the year.

The Tigers three-match win streak came to an end as the Cardinal, who’s starting rotation measures in at an average of four inches taller than the Tigers, hit .355 for the match and use their length to keep the Tigers offense from racking up kills.

The Cardinal held a 7-1 advantage in blocks.

Stanford jumped out to a 7-2 lead early, but the Tigers posted three straight points as Fleming and Elman tallied kills and Janie Feldsher posted a solo block. The Tigers closed to within 13-12, as Skylar Wine and Baptista posted kills. Elman drilled a ball own the line for a 14-13 lead, and again for a 16-15 lead. But the Cardinal rallied to tie. A block from the Cardinal provided a 21-19 lead. Fleming added a kill, but a point off an overpass gave Stanford a 23-20 lead. Facing set point, Baptista blasted a kill to the back line, but the Cardinal answered with a kill for a 25-21 win.

Feldsher, Wine recorded kills, and the Tigers fed Baptista for three straight Pacific kills as the Tigers rallied to tie at 21-21, but the Cardinal picked up a kill, and the Tigers were called for four hits off a ball sent back by the Cardinal blockers as Stanford took a 2-0 lead into the break, 25-22.

Gotterba served up an ace early in set three, and Baptista’s 10th kill tied the set at 4-4. Stanford took an 9-6 lead on a kill from Keefe. Wine brought Pacific within 9-8, but the Cardinal gained separation on a block and a kill from Kathryn Plummer. Three kills from Baptista kept the Tigers within 15-13, but the Tigers would get no closer as the Cardinal reeled off five straight points to seize control. Feldsher added a late kill for the Tigers, but a block from Plumer and Audriana Fitzmorris on match point sealed the win for the Cardinal.

Stanford improves to 6-2 overall, while Pacific falls to 6-6.

Pacific will open West Coast Conference play next week, as the Tigers welcome Portland to town on Thursday at 7 p.m., and Gonzaga on Saturday at noon.