No. 1 Nebraska Rallies Back To Take Down Creighton 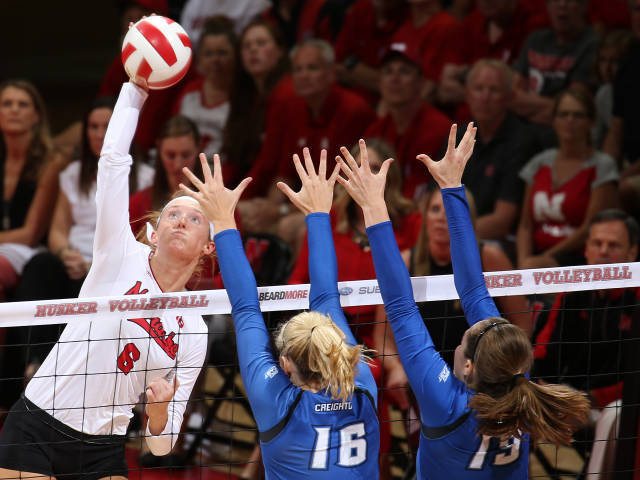 After dropping the first set, the Huskers rallied back to defeat the Bluejays, winning their 25th straight match.

Nebraska’s Kadie Rolfzen was named the most valuable player for the weekend, she posted a double-double with 17 kills and 13 digs, while also recording a career-high nine blocks. Justine Wong-Orantes picked up a season-high 22 digs, earning all-tournament team honors.

The Huskers hit for .245, holding Creighton to .131 hitting percentage.

Lauren Smith led the Bluejays with 12 kills and four blocks, hitting .333. Maryssa Wilkinson posted nine kills and hit for .292, both were named to the all-tournament team.

LINCOLN, Neb. – The No. 1 Nebraska volleyball team bounced back from a first-set loss to defeat Creighton 3-1 (23-25, 25-13, 27-25, 25-18) Saturday night in front of 8,249 fans at the Bob Devaney Sports Center. NU finished the Ameritas Players Challenge unbeaten and improved to 9-0 on the season with a perfect non-conference record.

Kadie Rolfzen was named the most valuable player of the tournament with a full stat line – 17 kills, 13 digs and a career-high nine blocks. She was one block shy of posting Nebraska’s first triple-double since 2002. Rolfzen carried the Huskers in the fourth and final set with eight kills on .571 hitting to lift the Huskers to their 25th win in a row. Her 17 kills moved her to ninth all-time at Nebraska with 1,287 in her career.

Nebraska held a .245-to-.131 hitting advantage. The Huskers posted a season-high 14 blocks with Kadie Rolfzen and Amber Rolfzen each recording nine.

Set 1: A kill by Malloy and solo stuff by Amber Rolfzen gave the Huskers a 5-4 lead, and Holman and Foecke hammered back-to-back kills to make it 10-6 and force a Bluejay timeout. Creighton pulled within 12-11, but a kill by Holman and stuff by the Rolfzens pushed the lead to 14-11.  An outstretched one-handed dig by Annika Albrecht helped set up Foecke for a kill that made it 17-14. A kill by Holman and Bluejay hitting error gave the Huskers a 21-18 edge, but Creighton came out of a timeout with back-to-back kills from Winters to pull within 21-20. After a Husker timeout, an ace by Megan Ballenger tied the set, 21-21. NU went back up 23-21 before Creighton came back to tie it again. An ace by Winters out of a timeout gave the Bluejays set point, 24-23, and a Husker block error ended the set in favor of the Jays, 25-23. It was the Huskers’ first set loss since the opening set of the season, snapping a streak of 24 straight sets won.

Set 2: The Huskers also dropped the first set to Creighton at the Devaney Center in 2014 before rallying to win 3-1, and they were ready to do the same again, striking for a 4-0 lead in set two on a Hunter ace. Back-to-back kills by Holman and Kadie Rolfzen increased the lead to 9-3 to force a Creighton timeout. Amber Rolfzen tacked on another kill, and the twins combined for another block to make it 12-4. Nebraska turned to Foecke for two more kills as it built an 18-8 advantage. Holman’s seventh kill gave the Big Red set point, and NU won its second set point, 25-13. The Huskers responded from their .258 hitting in set one to hit .400 in set two. Nebraska had four blocks in the set and held Creighton to .114 hitting.

Set 3: Nebraska went up 6-2 before Creighton answered with a 7-0 run to take a 9-6 lead. A swing by Malloy ended the run, but the Bluejays bounced back to a 14-10 lead. A service error and Holman/Kadie Rolfzen stuff pulled NU within two, and Malloy swung the Huskers back within one, 14-13. After a Creighton timeout, Kadie Rolfzen continued the run with her eighth kill. NU took a 16-15 lead after Creighton hit long, and another CU error made it 17-15. The Jays came right back with three straight points – two on blocks by Taryn Kloth and Lauren Smith – to go up 18-17. The Rolfzen twins combined for another block to tie it 18-18, and Foecke blasted a back-row set to put NU ahead 21-20. Creighton went back in front, 22-21, after two Big Red errors. The Jays gained set point at 24-22 before Foecke kept the Huskers alive with a kill. Kadie Rolfzen killed a bump set by Wong-Orantes to even the set, 24-24. Smith regained set point for Creighton with a kill after a timeout, but the Jays served long. A block by Amber Rolfzen and Malloy earned NU its first set point at 26-25, and the pair teamed up again for a stuff to give NU the 27-25 win. Amber Rolfzen had four blocks in the set, as NU increased its match total to 12.0. The Huskers needed their defense to come up big to take the set. They hit .100 but held Creighton to .073.

Set 4: Kadie Rolfzen took over for the Big Red, hammering five kills to get Nebraska level at 13-13. Nebraska took a 15-14 lead on an important challenge win, as the officials overturned a Creighton kill by ruling the ball went long. After a pair of Creighton hitting errors, the Huskers held a 17-15 lead. The Jays tied the set twice before Kadie Rolfzen blasted her 15th kill for a 19-18 lead. Rolfzen’s kill and Kenzie Maloney’s serving put the match away as NU went on a 7-0 run to finish the match. Kadie Rolfzen scored the final three points on two kills and a block.

Up Next: The Huskers begin Big Ten play on the road next weekend. NU will play at Michigan on Friday at 6 p.m. (CT) and at Michigan State on Saturday, with a time to be announced early in the week.

LINCOLN, Neb. — Creighton Volleyball gave top-ranked Nebraska its toughest test of the season, but the defending national champion Cornhuskers survived three crucial set points in the third frame and escaped with a 3-1 win before 8,249 fans at the Bob Devaney Sports Center on Saturday night. The win secured the championship of the Ameritas Players Challenge for NU, which won its 25th straight match and improved to 9-0 this fall.

Lauren Smith led Creighton (6-6) with 12 kills and four blocks on .333 hitting, while Marysa Wilkinson added nine kills and hit .292. Both women were named to the All-Tournament Team after a 2-1 weekend in their hometown.

Nebraska (9-0) was led by 17 kills, 13 digs and nine blocks by Tournament MVP Kadie Rolfzen, a returning All-American from the Omaha suburb of Papillion.

The Cornhuskers and their 209th straight home sellout crowd came in on a roll, having won 24 straight sets since dropping a 27-25 set to open the year against No. 10 Florida on a neutral floor. After an early 5-5 deadlock, Creighton fell behind by one point eight different occasions, and each time NU got a sideout to push the lead to two. Then, after a timeout trailing 21-18, the Jays went to work. Consecutive kills by Jaali Winters preceded an ace by Megan Ballenger to tie the set at 21-all. The Huskers regrouped to move ahead 23-21 before Creighton reeled off four points in a row to stun the host crowd. A kill from Smith, followed by a Rolfzen attack error, knotted the score at 23-all. Winters followed with an ace to give CU a set point, where a Husker blocking error gave CU a 1-0 lead over Nebraska for the second time in the last two meetings at the Bob Devaney Sports Center. Wilkinson had four kills in five swings during the first set, as CU out-hit NU .265 to .258.

After Nebraska cruised to a 25-13 win in the second set to tie the match, the Bluejays would once again throw a scare into the hosts. Winters served up a 7-0 run as CU raced to 9-6 lead. CU remained in front until NU tied the score at 14-all. The teams would be tied at 17, 18, 19, 20, 21 and 22 before the Jays made their move. Wilkinson and Ballenger stuffed Rolfzen for a 23-22 lead, and CU earned a pair of set points after Briana Holman‘s attack error. Mikaela Foecke‘s kill staved off the first set point, and Rolfzen followed with another  to tie the score. Smith would give CU a third set point with a kill, only to see the Jays squander the opportunity with one of its 12 service errors on the night. Nebraska took advantage, as Andie Malloy and Amber Rolfzen teamed up for consecutive blocks to give NU the set and a 2-1 lead in the match. Smith had six of CU’s 12 kills in the third frame.

The fourth set was closer than the final score indicated, with 13 ties. With the score even at 14-all, officials overturned a Bluejay kill after video review as NU took a 15-14 lead at the media timeout. Though CU regained its composure to steady the score at 17-all, the Cornhuskers ended any drama with a match-ending 8-1 run.

Creighton hit .131 for the match, finishing with 48 kills, 58 digs and six blocks. CU also aced Nebraska five times, an impressive figure considering NU had been aced just 11 times in eight matches entering the contest. It also matches the most allowed by Nebraska at home since Penn State also had five on Oct. 3, 2014. Creighton’s 81 points were the most allowed by a Nebraska opponent this fall, and the most by a Husker opponent in Lincoln since NU surrendered 97 to Wisconsin on Oct. 24, 2015, which was also NU’s last loss at any site.

Nebraska finished with 56 kills, two aces, 66 digs and 14 blocks while being held to a season-low .245 hitting percentage. Holman, Foecke and Malloy each added 11 kills for the Cornhuskers, which received a match-high 47 assists from Kelly Hunter and 22 digs by libero Justine Wong-Orantes.

Creighton returns to action on Friday, Sept. 23 when it hosts Marquette (10-2) to open BIG EAST play at 7 pm.