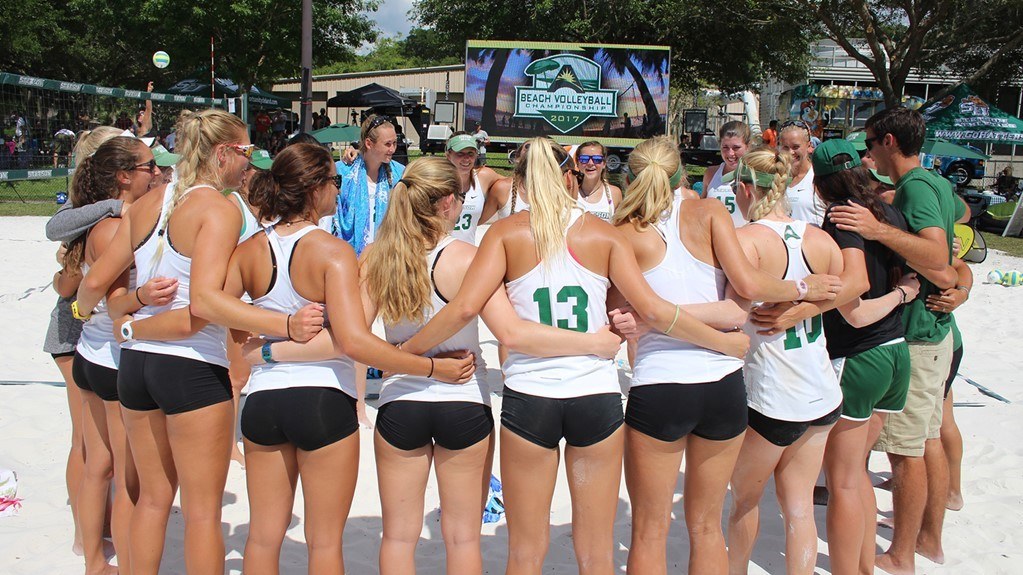 Top-seeded Stetson and 3rd-seeded Florida Gulf Coast have advanced to the front of the winners’ bracket after day 1 of the 2017 ASUN Beach Volleyball Tournament. The two teams will play at 9:00 AM on Sunday, with the winner advancing to the conference championship game.

Stetson made their path via a 4-1 win over the defending conference champions North Florida in their only game on Saturday.

“The games were really tight,” Stetson head coach Kristina Hernandez said. “We thought UNF would come out pretty strong. It is a good rivalry for us. We got into some third set situations and I thought we were really patient with what we were doing.”

The two teams have faced off in 4 of the 5 conference championshi matches in history.

Stetson got on the board first at the 5 seed as Sunniva Helland-Hansen and Carly Perales won 21-10, 21-8. The pair combined for over 15 aces including a run of three in a row by Perales during one stretch.

“They were really aggressive (serving) and put that pressure on,” Hernandez said about the 5 seed. “I don’t think they backed off the entire match. Even if they missed a few serves here and there, they kept the pressure on North Florida and did not allow them to get into a rhythm.”

At the 4 seed, Tiffany Creamer and Rachel Noble played the first three-set match of the day, surging ahead midway through the final frame to win 15-8. That victory gave Stetson an early 2-0 lead.

“It is really nice to start out with (wins at) the 4s and 5s, and going into that second round what a little bit of that pressure off of us,” Hernandez said. “I commend them on starting strong, especially Rach and Tiff. I think they really struggled in the second set, but they brought it back in in the third set. That was a huge win for us.”

At the 2 seed, Kristin Lind and Darby Dunn took a big lead early in the final frame, then held off a late UNF run to clinch the match 15-13. They also staved off three set points in a pivotal first set win 25-23.

At the 1 seed, Samantha Harris and Maggie Skjelbred won 15-13 in the third set to give Stetson its fourth and final point.

Stetson is now 11-0 against ASUN opponents this year. If the Hatters defeat the Eagles at 9 a.m., they will advance to the 3 p.m. championship.

“We have to focus on Florida Gulf Coast now and hopefully get a break before that next match,” Hernandez said.

Florida Gulf Coast upset 2-seed Mercer 4-1 to advance as well, which sends Mercer to the loser’s bracket. There they beat Jacksonville on Saturday 3-2, and they’ll have to win 2 more games still on Sunday morning to get back to the championship game that is scheduled for 3:00 on Sunday.

Bracket After Saturday below: 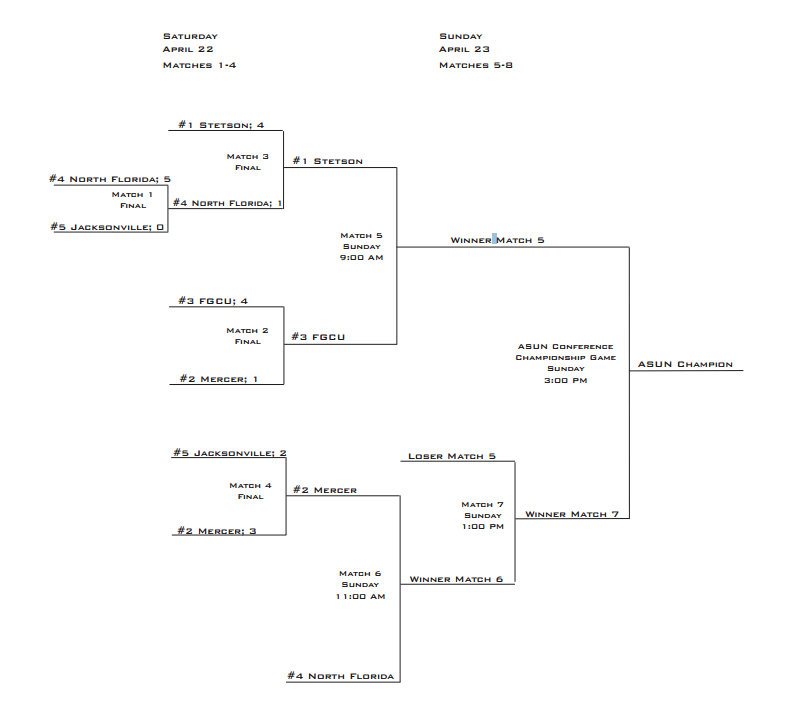