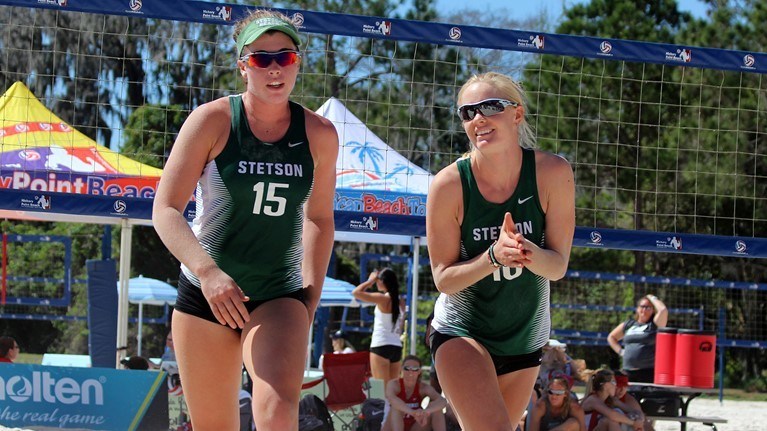 After notching a perfect opening weekend of conference play, No. 9 Stetson’s Kristin Lind and Darby Dunn earn their third ASUN Conference Beach Volleyball Weekly honors of the year, as announced by the league office Tuesday.

Lind and Dunn are receiving ASUN Beach Volleyball Pair of the Week honors for the third time this season, and the second week in a row, after starting conference play at a perfect 4-0. Lind and Dunn won two matches each against Jacksonville and North Florida while playing in the second seed. They were one of four pairings to win their first four matches of the ASUN season and the only duo to win all of its contests in straight sets. With last weekend’s performance, the two Hatters move to 13-4 when playing in the second seed, and hold a conference-leading 15 wins overall. Lind and Dunn held opponents to 15 points or less in five of the eight sets they competed in, while going to extra points just twice.

Stetson finished 4-0 as a team this week and join FGCU and Mercer with a perfect record through the first week of ASUN play. This season marks the fourth year in a row the Hatters have gone undefeated in their first four contests against ASUN opponents, as the DeLand contingency retained its No. 9 ranking in the most recent AVCA Coaches Poll. Stetson will host FGCU, Mercer and Coastal Carolina this upcoming weekend competing against both the Bears and Chanticleers twice each. The Hatters will be looking to start ASUN conference play 8-0 for just the second time in program history, last achieving the feat in 2014.