When originally arrested in September, Mark William Ackett confessed to recording students while changing. Now 353 new charges have been levied against him. Stock 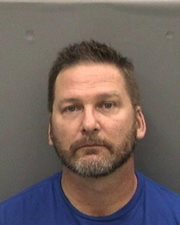 A high school teacher and volleyball coach at Bloomingdale High School in Tampa, Florida has been arrested on 353 new charges relating to cell phones found in the school’s girls’ locker rooms.

His initial arrest came after a 17-year old student found 2 cell phones hidden in the locker room, which was recording when it was found, and investigators have since found more devices. The Tampa Bay Times has reported that he confessed to investigators that he began recording students in January 2017 when he began teaching and coaching girls’ volleyball. He resigned after the cameras were discovered and turned himself in to face the new charges on Monday.

According to a press release by the Hillsborough County Sheriff’s Office, his 353 new charges are:

They come after analysis on the devices found uncovered ‘267 videos and images of girls ranging from 14 to 18 years old, in various stages of undress.’

Ackett’s bail was set at $2 million, and he was released on Wednesday after posting $250,000 bond.