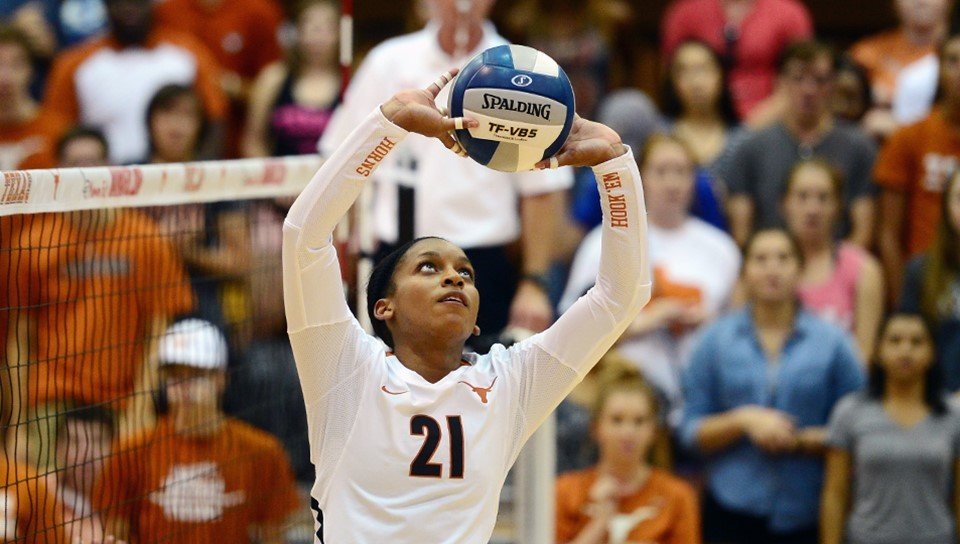 Saturday marked the first professional game in the career of former University of Texas All-American Chloe Collins – a setter who... Archive Photo via Texas Athletics

Saturday marked the first professional game in the career of former University of Texas All-American Chloe Collins – a setter who has signed to play with Spain’s CV Gran Canaria club. Gran Canaria is a Spanish first division team based out of the Canary Islands (Gran Canaria, in Spanish).

The debut, which came a day prior to Collins’ 22nd birthday, resulted in Gran Canaria’s first win of 2017 when they topped VP Madrid 3-1. The club currently sits just 9th out of 11 clubs with 10 points after the win. VP Madrid is one spot ahead of them in the league table with 11 points. The game marked the first weekend of the second round of play in the league.

The 5’8″ (173cm) Collins departed for Spain on Tuesday to join her club, and is one of two players to make their league debuts on Saturday for Gran Canaria. 25-year old Polish outside hitter Laura Tomsia, who stands 6’3″ tall (191 centimeters), also joined the club from the league of Cyprus. Her old club released her after facing financial difficulties.

This embarks my journey abroad as a professional athlete. Canary Islands-Spain ?? here I come! ✈️

“My partners are very nice and they are making my adaptation much easier,” Collins said. “I hope to bring the team my game and meet the goals. ”

Collins had 36 assists and 11 digs in the NCAA Championship game last month where the Longhorns fell to Stanford; she had 37 assists, 11 digs, and 2 blocks earlier in that week in the national semi-finals.

In her final season, Collins recorded a career-high 1,344 assists (11.6/set), which ranked her 5th nationally in that category.

In her debut, Collins had 2 blocks and 4 kills on 9 attacks. Tomsia, meanwhile has already made herself a focal point of the team’s offense with 14 kills on 44 swings in her debut.

Collins was brought in by the team to replace Mariana Nardi, who had to return to her native Brazil for “personal reasons.”

Gran Canaria will play another bottom-of-the-table team next week when they face 10th-place CV Sant Cugat. The team has a favorable schedule to break-in their new players, with their next big test not coming until they play league leaders Longrono on February 11th.