Why Texas Can Win the National Title in 2017 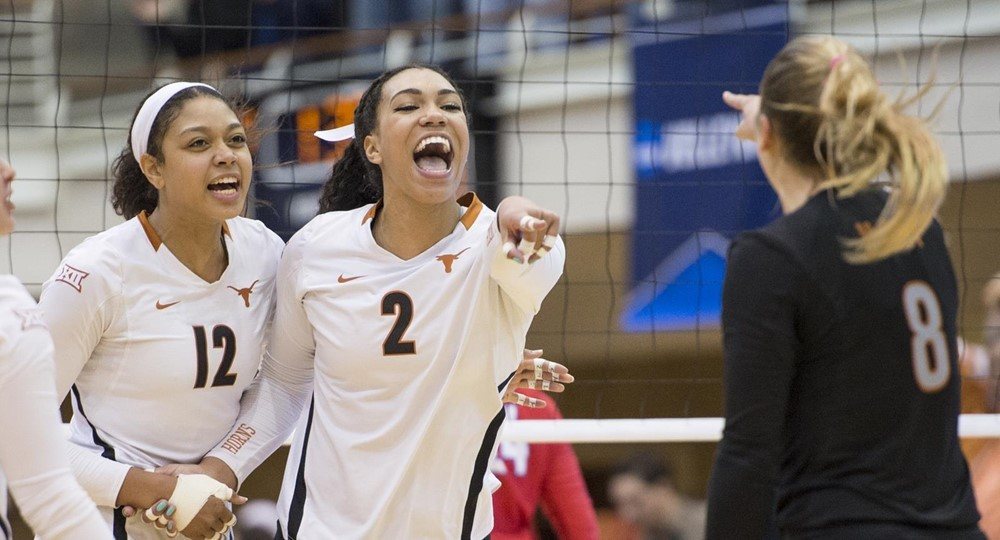 With so much offensive firepower joining a nationally heralded recruiting class, Texas has what it takes to win the title in 2017. Archive Photo via Texas Athletics

Including today, there are two Mondays left before the start of the NCAA Women’s Division I Volleyball season. To countdown the season, VolleyMob has begun a new series as we inch closer to late August. Each of the final eight weeks, we countdown the top eight teams in our latest preseason top 25 poll and explain why their fans should have high hopes for their national title chances. So, with two weeks left we look to the team ranked second in our poll: the Texas Longhorns.

The Texas Longhorns have come incredibly close to answering the question of ‘can they win the National Championship’ the last two years, as they fell short to Nebraska in 2015 and to Stanford this past season. All-in-all, it wasn’t the usual dominant Texas, who didn’t win the Big 12. They still proved to be one of the best in the country though, going 27-5 on the season as they ended the year ranked second in the last AVCA Coaches Poll. Now, after gaining all that tournament experience, they bring back maybe the country’s most loaded offense to pair with an incredibly deep and star-filled team.

As if Texas needed more help, they get three-time AVCA All-American middle blocker Chiaka Ogbogu back after she missed 2016 due to an eligibility issue. She not only brings physicality and talent to both ends of the court, but also fills a position that the Longhorns struggled to lock down until the end of the season. Beyond that, she provides leadership for Texas. Not to mention that Ogbogu can start a trend as Inky Ajanaku led Stanford to the National Championship last year after missing the season prior.

One could honestly make the case that Texas has three National Player of the Year candidates on its team at once. A three-time, and two-time first-team AVCA All-American in Ogbogu would make the list along with Micaya White and Ebony Nwanebu, who were both AVCA First-Team All-Americans in 2016. Put simply, Texas has just as much, if not more, star-power than any team in the country.

As mentioned, one possible hindrance to being the top offense will be what happens at the setter position, as 2016 AVCA Second-Team All-American Chloe Collins graduated from the program. They also lose AVCA All-America Honorable Mention recipient Paulina Prieto Cerame and utility setter/defensive specialist Nicole Dalton. As previously mentioned, they should have more than enough pieces on offense to counteract Preito Cerame’s departure while they also bring back defensive specialists Claire Hahn and Autumn Rounsaville after solid freshmen seasons to cover up Dalton’s loss. The setter position will likely be determined between sophomore Riley Fisbeck and freshman Ashley Shook – both of which were Under Armour All-Americans in high school. With two talented but inexperienced setters, could Texas run a 6-2 to minimize some questions? Regardless, they will have enough of a supporting cast to contend for a National Championship.

Shook isn’t the only highly-touted freshman to join the Longhorns in 2017. PrepVolleyball’s number one recruit, Lexi Sun, brings in even more depth and talent to the outside hitter spot, while the number two recruit in the country, Brionne Butler, joins a stacked middle blocker position.

So when you add up all of the returnees with the freshmen, you wind up with not only a star-studded lineup and physicality but depth across the board at every position. They do need to heavily improve their passing and serve reception, but even with that as a weakness last season they made the National Championship match without Ogbogu. They already have a good start to improving that facet of their game as well, with libero Cat McCoy back as one of the best returning liberos in the Big 12 in addition to the likes of Hahn and Rounsaville. Sun may also provide the Longhorns with a strong passing outside hitter that can be utilized for six rotations.

The schedule starts out with a challenge against Florida and Oregon in Gainesville and continues later on with San Diego and Minnesota before they hit the conference slate. They’ll see several potential NCAA Tournament teams, but none stand out more than Kansas, who took the conference crown from Texas in 2016. Still, they earned a top-four seed over Kansas for the NCAA Tournament, something that could be up in the air with the two meetings this season. As usual though, Texas will likely roll in as a top four seed and host its way to another Final Four.

The amount of star-power, talent, depth and experience that the Longhorns have for head coach Jerritt Elliott is exactly why Texas can win the National Championship in 2017.