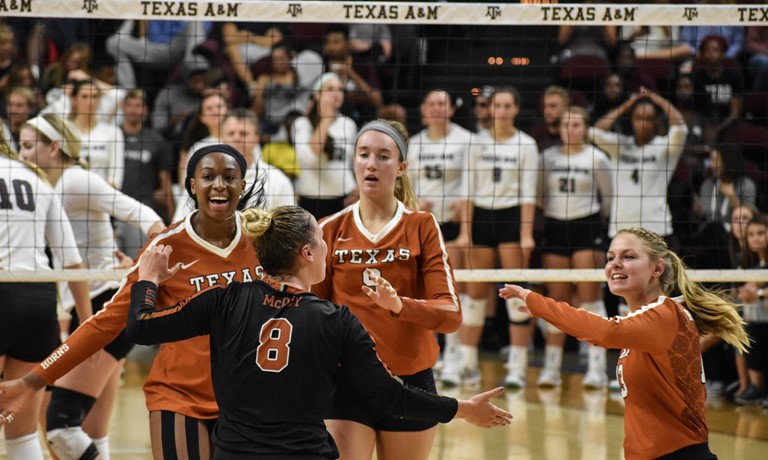 In an in-state match up, the Texas Longhorns ran through Texas A&M in three sets to take the win. Current Photo via Texas Athletics

In an in-state match up, the Texas Longhorns ran through Texas A&M in three sets to take the win. The Longhorns unhanded the Aggies in one category – blocking – as they posted 13 to A&M’s 2. Other than this misnomer the stats were fairly even between the two teams.

After dropping the first two points of the first set, the Longhorns fought back to tie things up at 5-5 before taking a small lead off an A&M service error. The Aggies, however, came back to tie things up five separate times at 15-15. At this point, the Longhorns picked up their play to take another small lead after a big block from Chiaka Ogbogu and Ashley Shook stopped Hollann Hans. A kill from Yaazie Bedart-Ghani ended the first set at 25-20.

The second set was another story for the Longhorns as they took a 10-5 lead to start the set and didn’t look back. A kill from senior Ebony Nwanebu ended the second 25-18, giving Texas the 2-0 match advantage. The start of the third set was a close battle, with the Aggies taking a one point lead at 11-10. Texas fought that with an Ogbogu kill to tie things at 11-11 before two A&M attack errors extended the Texas lead. A number of attack errors for the Aggies was their downfall in the third, followed by Nwanebu kill to end the match 25-15.

The Longhorns were able to hold the Aggies to a .089 hitting clip while hitting .307 themselves.

Texas was led by Micaya White with 10 kills and 13 digs for her first double-double of the season. Lexi Sun and Ogbogu added another seven kills for the Longhorns while Ogbogu blocked six balls. Cat McCoy picked up a match-best 18 digs while Sun added another 10.

A&M was led by Hans with 11 kills while Amy Nettles and Amy Houser picked up 13 and 11 digs, respectively.

Sophomore Micaya White posted 13 digs, adding a team-leading 10 kills for her first double-double of the season.

Tentative leads were held by both teams opening the first set, with points being traded through competition. By the first timeout, the Longhorns had earned a one-point lead at 15-14 before widening the gap to three points by the second, 19-16.  With White spinning five kills on a .500 hitting percentage to lead the way offensively, Texas secured the set at 25-20. The Longhorns held the defensive edge in the opening frame, out-blocking the Aggies with five blocks to the TAMU two.

Fueled by a .750 hitting percentage to open the second set, the Longhorns jumped out to a 5-2 lead before drawing a Texas A&M timeout at 10-4. Pushing to advantages of seven and eight points, stalwart defense helped Texas weather a spirited hitting barrage from the Aggies and close out the set, 25-18.

The second set’s momentum continued into the beginning of the third for Texas A&M, with the Aggies taking a 9-6 lead to open the frame. Texas responded with a .385 attack clip, earning an 8-1 scoring run to move ahead at 13-12. With Texas not looking back, senior Ebony Nwanebu terminated a kill at 24-15 to wrap up a three-set victory for the Longhorns.

Texas will face the second of three consecutive road matches, taking on UTSA on Tuesday, Sept. 19 at 7 p.m. The next match at Gregory Gym takes place on Wednesday, Sept. 27 against Baylor.

On the challenge presented by Texas A&M: Their setter was really the most accurate setter we’ve faced all year long and she still hit .300. Their outsides are very capable of being in a good position. They always fight really hard and it’s a team that’s always in the NCAA tournament, play at a high level.

On winning the match: It’s like redemption, so it’s nice to three-out and not to have all this stress that we just put on ourselves. Jerritt (Elliott) said before this game to just win, come out and not let up. It’s a great feeling and I feel like for the first time that we’ve been consistent in our pressure.

It was the Aggies’ fourth time in the last five matches to face a team ranked in the top six, and it was the first time A&M played host to its former conference rival since moving to the Southeastern Conference in 2012.

Texas (7-2), which entered the week ranked No. 4 in the nation in blocks per set and No. 7 in opponent hitting percentage, lived up to its rankings, outhitting A&M, .307 to .089, as the Aggies (3-4) gave up a season-high 13 blocks while recording a season-low two team blocks.

There were seven ties and three lead changes in the opening set. The Aggies overcame a 9-6 deficit, using a 5-1 run to take an 11-10 lead. A&M equaled its largest lead at 14-12 before Texas went on a 9-2 surge to go up, 21-16. The Aggies, who were outhit, .200 to .061, in the set, got within 22-19 on back-to-back kills by Kiara McGee and Samantha Sanders but were unable to get any closer before Yaazie Bedart-Ghani clinched the set for the Longhorns with a kill.

The Longhorns jumped out to a 10-4 lead in the second set. Texas, which outhit A&M, .333 to .167 in the set, went on to equal its largest lead at 20-12 before Aggie setter Camille Conner won a joust at the net and outside hitter Hollann Hansfollowed with an ace. The Aggies then won a long rally, with defensive specialist Amy Houser making several play-saving digs that eventually led to a kill by outside hitter Kiara McGee. A&M won its fourth consecutive point on a hitting error by the Longhorns to get within 20-16.

A kill by Ebony Nwanebu ended the Aggies’ longest scoring rally of the match, but Hans recorded a kill from the back row to put A&M back within 21-17. Texas, however, scored three unanswered points to go up, 24-17. Serving for the set, Cat McCoy served long to keep the Aggies alive, but Nwanebu came back with a kill down the line on the ensuing play to close out the set and give Texas a 2-0 lead in the match.

A&M held a lead early in the third set until Texas went on a 3-0 run to pull ahead, 13-11, giving   the Longhorns their first lead since 2-1. Hans and freshman middle blocker Makena Patterson had kills that kept A&M within 13-12 and 14-13, respectively, before Texas scored seven unanswered points to go up, 21-13. A kill by Conner ended the Longhorns’ rally, but the Aggies were unable to overcome the deficit. Texas, which outhit A&M, .429 to .051 and tallied five blocks in the stanza, secured the sweep on a kill by Nwanebu.

Hans took match-high honors in kills with 11, and Conner finished with 28 assists. Libero Amy Nettles and Houser each posted double-figure digs with 13 and 11, respectively.

Micaya White led the Longhorns with 10 kills while hitting .409, and McCoy finished with a match-high 18 digs. Chiaka Ogbogu had a match-high six blocks.

A&M opens SEC play at LSU on Friday, Sept. 22. First serve is at 7 p.m. at the Pete Maravich Assembly Center in Baton Rouge, Louisiana. The Aggies open their SEC home slate on Sunday, Sept. 24 as they host defending SEC co-champion Missouri at 12 p.m. at Reed Arena.

Thoughts on the match…
“I think we are all just really disappointed. We would get a run here and a run there, and we wouldn’t be able to maintain it. It wasn’t always what they were doing, it was more our errors. We had 26 attack errors to their six with the same number of kills. That’s a problem. They do have a really nice block. They started off blocking us, and sometimes that makes hitters question where do I go now and it’s going to be tough to get off the block. I thought we started to get that in set three. We started to find more openings, but we couldn’t find more openings because we weren’t in system enough. We were constantly having to set them from the back court, that’s always the toughest defense against you. We are disappointed and I think we know the areas that we must improve, and I think we’ve seen some improvement in our first contact. There are spots of it, and it certainly is an area when we are in system and get Camille [Conner] the ball running our offense, we are really tough to deal with. We weren’t able to do that tonight.”

On what Texas’ hitters were bringing tonight…
“They have some nice hitters, but I thought we dug well. It’s more our serve-receive and our taking care of the ball when it’s not a difficult ball. When there’s a hard-driven ball, we just want that off the ground. Lexi Sun didn’t put heat on the ball the whole night. She just touched balls to corners and made us play the ball and we couldn’t even pick up a tip or translate that to any power. That’s on us, on the coaches. It sure opened our eyes to an area that we are weak in.”

On the crowd tonight…
“The atmosphere was awesome. I wish we could have put that positive energy to good use. I wish we could draw that every night, but I understand you have to win games to get crowds like that. Once we get in SEC play and we get rolling, it’s like a whole new season coming up. It will be good for us to get out of preseason mode because this is a championship we are going for in the SEC and start winning because we can. We should be winning, and they want to win. We have a few days to get that done, and hopefully with an environment like that we’ll be back in our gym next Sunday against Missouri.”

On SEC play beginning…
“We got to play some of the top teams in preseason. It opened our eyes to how much we have to improve. We have been working really hard throughout preseason, so we know what we need to work on. We’re going to get back in the gym tomorrow and make the changes that we need to before SEC play.”

On why the points were hard to come by tonight…
“I think working on our first touch is a huge thing so we can be in system more. Texas is a great team but we didn’t play our best tonight. I think starting with the first touch and being more consistent and making fewer errors is a huge thing for us.”

On if the rivalry still brings excitement…
“Yes sir. We were really excited because Texas is a great team for one, and A&M and Texas is always a fun match-up. Before the game we were all super excited. We just didn’t come out and play our game.”