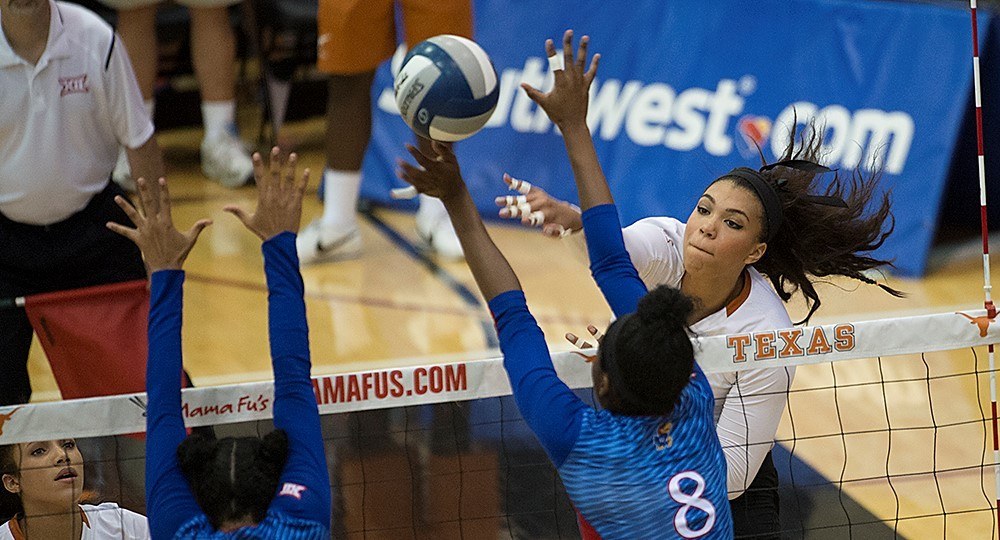 The Jayhawks All-American Kelsie Payne contributed 18 kills on a .444 hitting percentage, while Madison Rigdon produced a double-double with 20 kills and 13 digs.

In the third straight top-10 clash between the two teams, the Longhorns hit .351 and extended their winning streak over Kansas to 25 matches.

Junior outside hitter Ebony Nwanebu led the Longhorns with a dominant .514 hitting percentage, recording 20 kills on the night.

Freshman outside hitter Micaya White‘s 22 kills were the most in the game for either team, while her .348 hitting percentage was the second-best for Texas.  White also tallied eight digs.

Both teams traded points in the opening set, with neither team finding an early advantage. After piecing together several kills to grab a 12-9 lead, the Jayhawks stayed ahead of Texas for the majority of the set.

The Longhorns carried their momentum into the second set, a stretch of the match in which Texas denied the Jayhawks even a single lead. At one point the Longhorns held a 10-2 lead over Kansas, and from there the most the Jayhawks threatened was when they cut Texas’ lead to five, at 15-10.

The Longhorns only allowed one more point in the set and closed it out, 25-16, with a pair of punishing kills from White and Nwanebu.

The third set initially looked much like the first, with both teams trading blows and neither taking a substantial lead early in the set. A three-point run put Kansas up 18-14, and the Jayhawks held onto the lead to take the third set, 25-18.

The Longhorns built upon an early 6-3 lead to take a double-digit advantage at 20-10. A four-point Kansas run closed the gap to 23-18, but another kill from White put Texas at match point. A final service error from Kansas gave the Longhorns the victory.

On overcoming battles in the third set: I think we just stayed steady when we gave up games. We let a lot of easy balls go. We had a lot of situations where we just, we gave up some opportunities for points and when a team hits four of five on you in a game it’s going to be tough to be able to win that game. We responded. I liked the way we did. Our offensive numbers are good right now and we’ve got to be able to earn points and get in transitions and give ourselves some opportunities. Because when we do that, it becomes overwhelming for teams with players like these taking swings over and over again. And when they’re getting first ball kills and tools and missed digs, it gets a little bit more challenging for us to put up some runs.

On what they need to work on: Well we’re continuously growing. Again, for us right now, the big thing is our defense. Our numbers that we’re hitting are some of the best we’ve had ever here, at Texas. But our defensive numbers aren’t as good and so it’s being locked in for a longer period of time and making sure that we’re getting good touches. We’re really spending some time, we’re doing a lot of blocking in practice and making sure that we’re really working hard in those areas.

On using the loss to Wisconsin as fuel: Obviously we lost on our home court and it isn’t fun to lose, that’s kind of a wakeup call and it’s a learned lesson so I feel like that’s set the tone for what the rest of the season’s going to be like.

On keeping the momentum on the road next week: Whether we’re home or away, we keep the same intensity. I feel like when we’re on the road, it doesn’t really matter where we are, we can still do our jobs.

On the comeback to win the first set: It showed we have a lot of fight, we weren’t going to give up that set. We said before the game that we weren’t going lose on our home court anymore and so when we were down by that much, Chloe kind of like pulled us all in a huddle and was like, we’re not losing this first set, we’re going to win. And then we won the next one.

On having Chloe Collins back: It was good. Chloe just kind of pumps me up. She gets me so excited after every kill and so having her cheering me on and encouraging me gets me more fired up.

Austin-area natives junior All-American right-side hitter Kelsie Payne and junior outside hitter Madison Rigdon combined for 38 of KU’s 60 kills on the night to lead the Jayhawks. Rigdon registered 20 kills with 13 digs for her fifth double-double of the season, while Payne produced 18 kills on .444 hitting percentage.

Kansas jumped out to a 20-15 lead over the Longhorns in the first set, but were unable to shut the door as UT rallied to win the opening set in extra points, 27-25. Texas rode its wave of momentum towards a 10-2 lead in the second set before taking a two-set lead in the match, 25-16.

“We missed out on an opportunity tonight,” Kansas head coach Ray Bechard said. “We played well enough at times, but the first-set loss really stings. Not only did we not finished that set, there was carry-over into the second set. The response in the third set was pretty good but when you are playing a high-level team on their floor and you get an opportunity to jump out to a one-set lead, you have to take advantage of that.”

Kansas quieted the crowd of 4,000 Texas fans with a 25-18 third-set victory. Freshman middle blocker Zoe Hill was a wall at the net all night – finishing with a team-high five blocks, including two in the third set. Junior All-American setter Ainise Havili set to Payne for four kills during a 5-2 KU run to clinch the third set.

Texas took a 12-6 advantage in the fourth set. The Jayhawks were able to keep pace, but not chip into to its six-point deficit on the way to a 25-19 match-clinch decision for the Longhorns.

UP NEXT
Kansas returns to action next Saturday, Oct. 1 against Baylor (1 p.m., JTV/ESPN3) inside Horejsi Family Athletics Center.