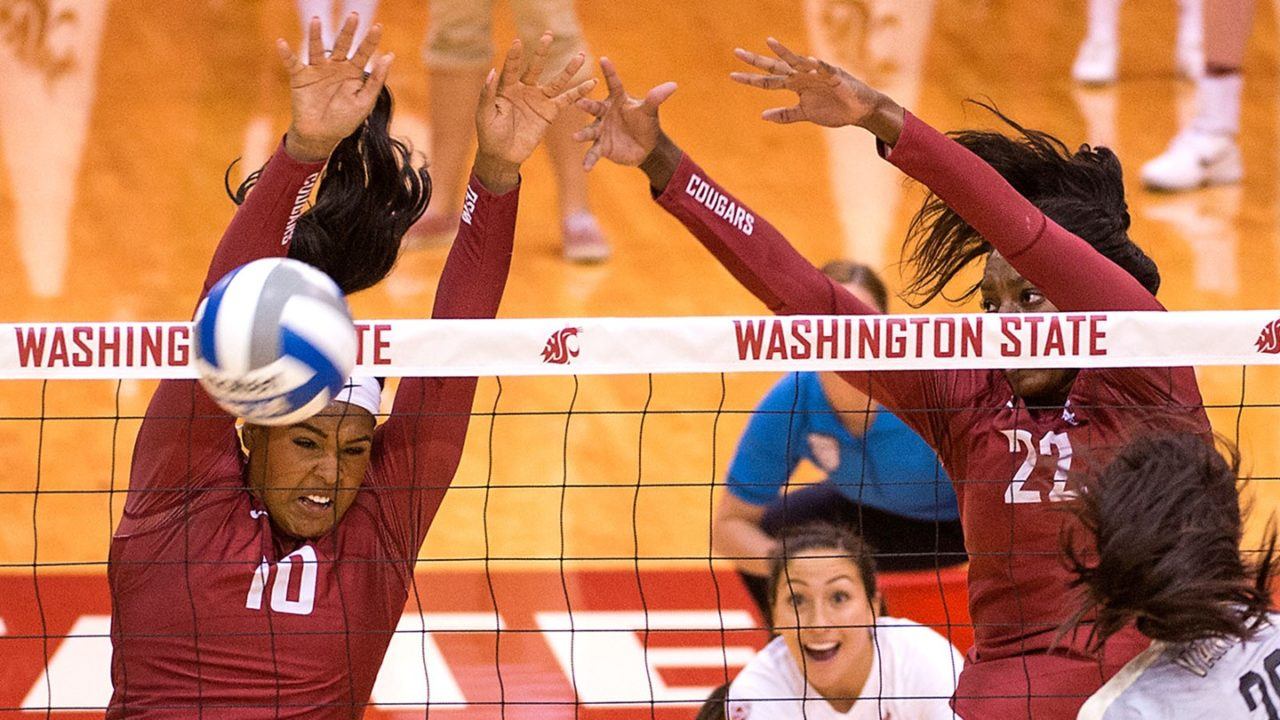 The Washington State Cougars have pulled a second straight upset over a top 10 opponent to open Pac-12 play. After beating rivals Washington on the road on Wednesday, Washington State topped UCLA in a knock-down 5-set match in Los Angeles on Friday.

This is the first time Washington State has beaten UCLA in Los Angeles since 1997, where current head coach Jen Greeny and assistant coach Shannon Hunt were both starters for the Cougars.

“I’m really, really proud of this team, especially winning on the road,” Cougar Head Coach Jen Greeny said. “We’ve had some great wins during our time with this program against ranked teams but not many of them on the road. Proud of the way we fought through to get it done in five. It is tough when you drop such a close set like we did in the third set, and we kept getting down early, but this team is resilient. Like we’ve seen in the past, we tend to find our way back, get the momentum back. Really proud that we pushed through the middle of the fifth set. Always fun to be ahead at the bench switch and we were ahead 8-7 and carried the momentum from there.”

Neither team hit exceptionally well in the match, but led by 18 kills from Kyra Holt, Washington State swung at a .222 clip to UCLA’s .190.

The Bruins balanced Washington State’s hitting with 10 more kills, led by Taylor Formico at 25, leading to 34 more attack attempts in the match and 17 more kills.

But the 15-6 block advantage for Washington State was the decider.

WSU upset No. 4 Washington 3-1 Wednesday night in Seattle. WSU’s last win over UCLA was in 2002, a 3-2 win in Pullman. The last time WSU won at UCLA was a 3-1 win in 1997 when both Head Coach Jen (Stinson) Greeny and assistant coach Shannon (Wyckoff) Hunt were starters.

“I’m really, really proud of this team, especially winning on the road,” Cougar Head Coach Jen Greeny said. “We’ve had some great wins during our time with this program against ranked teams but not many of them on the road. Proud of the way we fought through to get it done in five. It is tough when you drop such a close set like we did in the third set, and we kept getting down early, but this team is resilient. Like we’ve seen in the past, we tend to find our way back, get the momentum back. Really proud that we pushed through the middle of the fifth set. Always fun to be ahead at the bench switch and we were ahead 8-7 and carried the momentum from there.”

UCLA’s leaders were Claire Felix with 16 kills (.364), Reily Buechler with 15 kills, Torrey Van Winden and Jennie Frager with 14 kills each and Jordan Anderson with 11 kills. Ryann Chandler and Kylie Miller combined for 67 assists and Taylor Formico led the match with 25 digs. Frager was the Bruins’ blocks leader with five.

WSU, third in the country in team blocks coming into the week, dominated UCLA in team blocks, 15 to six. The Bruins won the kills battle 79 to 62 and digs category 81 to 71, but WSU hit .222 on the night and held the home team to a .190 hitting percentage.

“Tonight’s match was another huge win for our team,” Mims said after the match. “We were able to compete with poise and composure against a really great UCLA team. In the fifth set I was telling myself to stay aggressive regardless the score. I’m excited to get back to Pullman and play in Bohler next weekend. Go Cougs!”

LOS ANGELES – Three Bruins had double figures in digs, including a match-best 25 by senior Taylor Formico, while five were in double figures in kills, but ninth-ranked UCLA dropped a five-set decision to Washington State on Friday at Pauley Pavilion. Set scores were 22-25, 25-27, 25-23, 25-21, 16-18.

The Bruins (10-2, 1-1 Pac-12) led by as much as four before a late run gave the Cougars the opening set. Washington State (12-2, 2-0) jumped out to a 6-4 edge before UCLA went on a 9-3 run. Anderson had two kills, Buechler, Felix and Frager each added one, Anderson and Frager teamed up for a block and WSU committed three errors. The Cougars quickly tied things up at 14 before the Bruins raised the lead back up to four at 20-16. Anderson, Buechler, Felix and Frager all had kills, while the Cougars made two errors. However, Washington State responded with a 9-2 run to end the set, including the last five points, to win it 25-22. Buechler led the Bruins with five kills, Felix added four and Anderson and Frager both posted three. Formico notched five digs. The Bruins were out-hit .216 to .149.

Set one was much like set two, as UCLA had as much as a five-point lead, but Washington State came back late to go up 2-0 in the match. Down 4-2, the Bruins went on a 7-1 run on two kills each by Felix and Van Winden, one from Anderson and two Cougar attack errors. UCLA’s lead reached its peak at 14-9 and 15-10. With the Bruins still up 20-17, a 4-1 WSU run evened things at 21. The score would be tied again at 22, 23, 24 and 25 before the Cougars scored the next two to win the second 27-25. Felix had four kills and four digs, Frager and Van Winden each posted four kills and Anderson added three kills and six digs, as the Bruins were out-hit .200 to .093. Buechler and Formico both notched five digs.

UCLA raced out to an early 5-1 lead on two kills apiece by Buechler and Felix and one from Frager. The third set would feature eight ties and five lead changes, as at 9-7 UCLA, five in a row for the Cougars gave the visitors a set-best lead of three. Trailing 16-15, the Bruins scored three in a row on kills by Muno, Anderson and Buechler, and despite another tie at 20-all, UCLA didn’t trail for the rest of the set to force a fourth. Two straight WSU attack errors put UCLA up 22-20, and the teams sided out from there, as the Bruins won the third 25-23. Buechler had five kills in the third, while Felix, Frager and Muno posted three apiece. Formico added six digs and Anderson notched five. The Bruins out-hit the Cougars .262 to .167.

Washington State led by one on four occasions in the fourth set, but UCLA responded with a 12-4 run to go up by seven at 15-8. Frager was a part of four of the points on two kills, an ace and a block with Van Winden, who also added two kills. The Bruins’ lead reached as high as nine at 22-13. Washington State would trim its deficit to three at 24-21, but a kill by Muno wrapped up a 25-21 win to force a fifth set. Felix, Frager and Muno all had four kills in the fourth. Formico added five digs and Anderson posted four. The Bruins were out-hit .346 to .306.

UCLA jumped out to an early 4-1 lead in the deciding set on two Muno kills and spikes by Buechler and Van Winden, but an 8-3 run put the Cougars ahead 9-7. With WSU ahead 12-10, a kill by Buechler and two Cougar errors put the Bruins back up by one. However, the Cougars notched the next two to take a 14-13 edge. The Bruins saved three match points, but Washington State claimed the victory on its fourth attempt, winning the fifth 18-16. Van Winden paced the Bruins with four kills in the fifth, while Formico added four digs. The Bruins were out-hit .231 to .194.

After a long one-match homestand, the Bruins are back on the road one time zone to the right next weekend, facing Utah on Friday, Sept. 30 at 5 p.m. PT and Colorado on Sunday, Oct. 2 at 11 a.m. PT. Both matches will air live on Pac-12 Los Angeles.