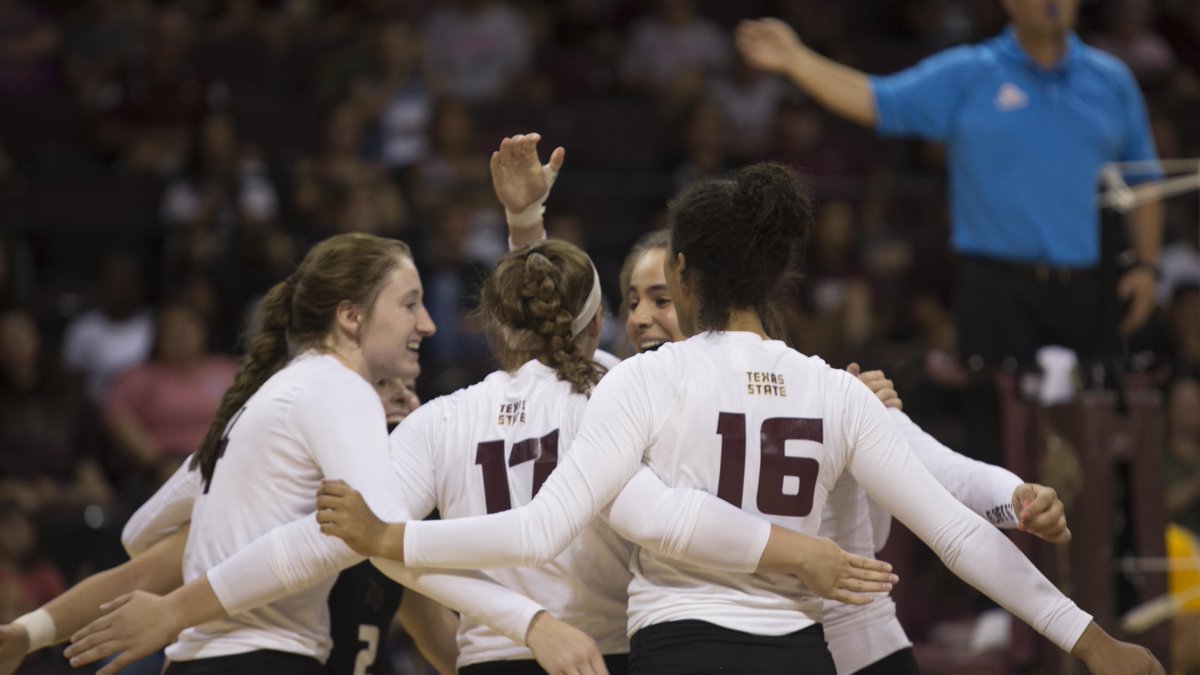 AUSTIN – The Texas State women’s volleyball team continued its 2018 historic season when the Bobcats defeated the Rice Owls in four sets to advance to the Second Round of the NCAA Tournament for the first time in school history, Thursday night, at Gregory Gym.

The Bobcats opened Thursday’s  match a little nervous when they dropped the first set 25-23 as Rice used an 8-3 run midway through the set to take a 20-18 lead.

“Tonight, we weren’t at our very best, but what they showed tonight was character,” head coach Karen Chisum. “They showed a lot of character sticking together when we were down because we didn’t have a lot of rhythm.”

The Bobcats turned to Florida transfer Cheyenne Huskey to help them settle down and get back into the match. Huskey didn’t disappoint as she ended the night with a career high 23 kills and 12 digs in the match. Freshman Emily DeWalt finished with 48 assists and 12 digs for her 21st double-double of the season. Senior Amy Pflughaupt added 13 kills and fellow senior Madison Daigle added 11. Janell Fitzgerald rounded out Texas State’s scoring leaders with 10 kills.

Huskey scored eight of her points in each of the second and third sets when she helped the Bobcats win both sets by the score of 25-22.

Daigle and Pflughaupt picked up the scoring slack in the fourth set when they combined for 12 points. Huskey added four kills and Fitzgerald tallied three in the final set. Pflughaupt had two kills to give the Bobcats to tie the score at 24 and 25. Then, Daigle scored the final two points in the match when she blocked an attack attempt by Rice’s Anota Adekunle and clinched the victory with a kill on the final play.

Set 1
Both teams fought back and forth early as the match before Rice used an 8-3 run midway through the first set to take a 20-18 lead. The Owls never trailed again and went on to win the set 25-23.

Set 2
Texas State came out and gained some early momentum to take an early 5-2 lead. The Bobcats extended their lead to 8-4 on a pair of kills by Cheyenne Huskey and Madison Daigle. Texas State extended its lead to 16-12 when Janell Fitzgerald smashed a shot down the right side. Then, Huskey added another kill to give the Bobcats a 17-12 lead in the set.

Set 3
Texas State took an early 5-3 lead in the third set on a service ace by Dinwiddie and a cross court kill Huskey. The Bobcats extended the lead when to 10-7 before the Owls took advantage of a pair of hitting errors to tie the score at 10. Huskey answered with a kill and the Owls had a pair of hitting errors to give Texas State a 13-10. The score was tied 17-17 when the Bobcats took advantage of a service error by the Owls and Kayla Granado had a service ace to allow Texas State regain a two-point lead. The Bobcats never trailed in the set again as they extended the lead to 22-18 on Huskey’s cross-court kill and Daigle’s block on a bad set by the Owls. A kill by Fitzgerald clinched the victory for the Bobcats, 25-22.

Set 4
Early in the fourth set, the two teams went back and forth again. The Texas State were tied at 10-10 when the Owls scored two straight points on kills by Shelby Livingstone. The Owls extended the lead to 18-014 before Pflughaupt scored on a cross-court kill and Daigle added two more kills to pull Texas State back to within 18-17.  Following a timeout by the Owls, Daigle tied the score on a block that Huskey added a cross-court kill in the second line to give the Bobcats a 19-18 lead. The score was tied at 24-24 when Grace Morgan ended a long rally with a kill the right side. But, the Bobcats answered when Pflughaupt hit a shot down the line and Daigle scored on a block to give the Bobcats a 26-25 lead. The Bobcats clinched the victory with a kill by Daigle.