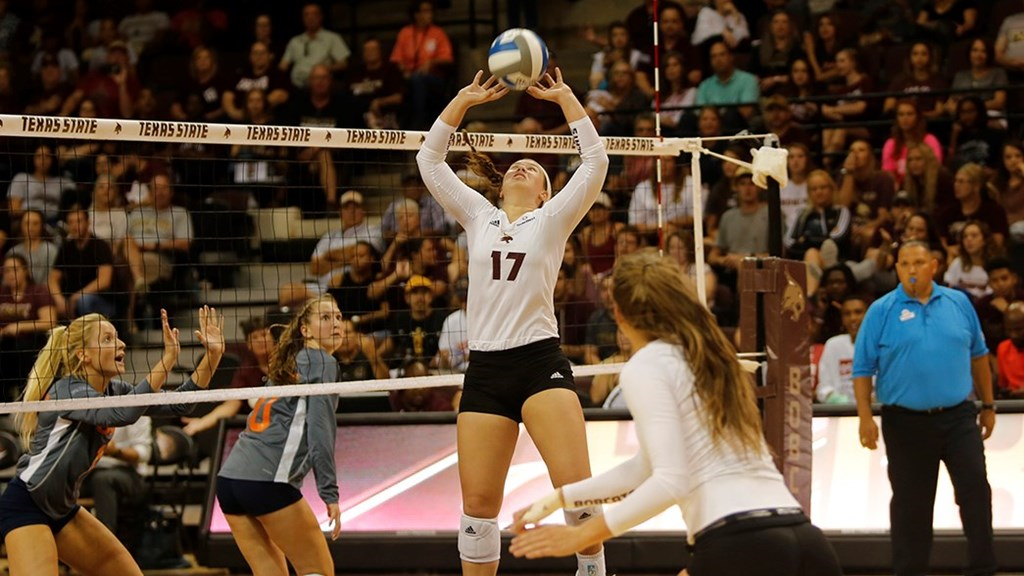 Texas State's Emily DeWalt's 11 weekly honors are most in a single season by one player in Sun Belt history, breaking a tie with Arkansas State’s Mallory Warrington that she equaled last week.  Current Photo via Texas State Athletics

NEW ORLEANS – Emily DeWalt was named the Sun Belt Conference Setter of the Week for the sixth time this season, the league announced Monday afternoon.

The true freshman for the Texas State volleyball team has also won five Freshman of the Week accolades this year. Her 11 weekly honors are most in a single season by one player in Sun Belt history, breaking a tie with Arkansas State’s Mallory Warrington that she equaled last week. Earlier this campaign she already became the first freshman in Sun Belt history with more than one setter of the week award.

DeWalt amassed 89 assists (11.13/set), 22 digs (2.75/set), five kills and four blocks in leading Texas State to a pair of victories over Louisiana and ULM. The Bobcats upped their win streak to 17 matches in a row and clinched no worse than a share of the Sun Belt Regular Season Championship. DeWalt began her week with 51 assists and 18 digs in a thrilling five-set win over the Ragin’ Cajuns. She then tallied 38 assists in a sweep over the Warhawks. She also hit .455 thanks to zero errors on 11 attacks.

TXST (22-5, 13-0 Sun Belt) is on a 17-match win streak, which is the third-longest in school history and the best mark since 2000. The Bobcats have clinched no worse than a share of the Sun Belt Regular Season Championship. They need just one more victory to clinch the title outright. The team will next head to Jonesboro, Ark., for a 6:30 p.m. match Nov. 2 against Arkansas State.