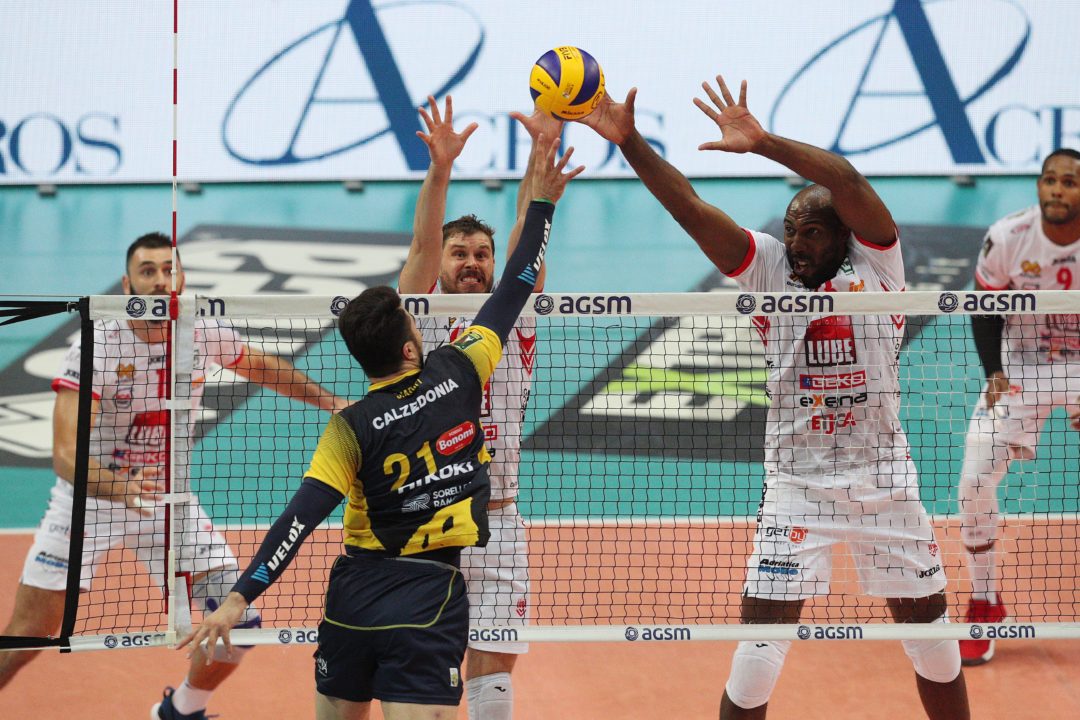 Robertlandy Simon is back in the middle and putting up big numbers for Lube Civitanova.  Current Photo via LegaVolley.it

Verona has had a difficult schedule to start the season. After opening with a win against Monza, they have had to face Perugia and Lube. They also had the misfortune of catching Lube when they are looking to be back at full strength. Tsvetan Sokolov had a slow start in his first start against Ravenna last week after knee surgery. He fared much better this week with a team-high 22 kills on the right side from 19 kills and 3 blocks, hitting .371 (54%). Osmany Juantorena contributed 15 kills from 14 kills and a block. Yoandy Leal struggled in attack from the left side. He scored 4 points on 4 kills with a .067 (27%) hitting percentage.

Robertlandy Simon, now back in the middle after filling in for Sokolov at opposite, put up opposite-like numbers. He finished with 21 points on 15 kills, 4 blocks, and 2 aces. His 15 kills came without an attack error, and he posted a .625 (63%) attack average. Enrico Cester only scored 2 points in just under 2 sets of action at the other middle blocker position. He was replaced by in the 2nd set by Dragan Stankovic, who scored 4 points on kills. Bruno Rezende set Lube to a .410 (51%) attack average for the match.

Stephen Boyer produced in a big way against another top team in Italy (he led his team in points last week against Perugia), but it was not enough. The French opposite led all scorers with 31 points in the defeat. He registered 27 kills, 3 blocks and 1 ace. The next highest scorers were their middle blockers. Aimone Alletti finished with 10 points and Sebastian Sole scored 9.

Santiago Orduna set a farily balanced attack for Monza on their way to a 3-1 win. He set his squad to a .451 (55%) attack average while all three of his pin-hitters registered double-digit points. They were led by Donovan Dzanoronok and his 21 points on 18 kills, 2 blocks, and 1 ace. The outside hitter also posted .615 (69%) hitting percentage. Amir Ghafour scored 10 points from 8 kills, 2 blocks, and 1 ace at opposite. Oleh Plotnytskyi came off the bench, starting the 3rd and 4th sets, to finish with 12 points on 8 kills, 1 block, and 3 points from the service line. Viktor Yosifov and Thomas Beretta scored 9 and 6 points in the middle respectively.

Mohamed Al Hachdadi finished with 19 kills and a block for Vibo Valentia, but his kills came with 9 errors in attack. Todor Skrimov scored 11 points on 8 kills and 3 aces with 5 hitting errors. Tom Strohbach scored 10 points on the outside with 8 kills and 2 blocks. Marco Vitelli scored 6 points in the middle, and Steffano Mengozzi scored 5 from the same position in the defeat.

Sienna reached another tiebreak, but they were not able to pull off their first win of the season. This match pitted the 2nd and 3rd most prolific scorers of the past 2 seasons against each other. Fernando Hernandez has the 2nd-best points per set ratio over the past 2 seasons, and Dusan Petkovic sits 3rd on that same list. Hernandez led the scoring battle with 34 points on the night, but Petkovic’s 27 points (23 kills and 4 aces) helped lead Sora to a victory.

Kupono Fey saw significant action for Sora. The outside hitter in his second professional season played in each set and started in sets 2,3, and 4. The former player at the University of Hawaii scored 7 points on 4 kills, 2 blocks and 1 service ace.