This Week in the Mountain West Conference 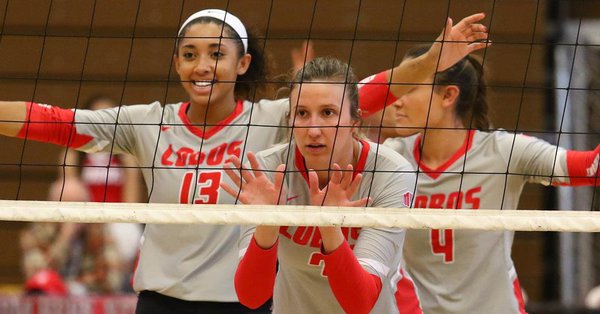 COLORADO SPRINGS, Colo. – With the end of the regular season fast approaching, the Fresno State Bulldogs are 8-1 in Mountain West play remain in first place. The Bulldogs, led by first year head coach Jonathan Winder, are off to their best start through 22 games since the 2003 season (17-5). The ‘Dogs went 2-0 last week behind the strong play of Madelyn Halteman, the MW Offensive Player of the Week, who averaged 11.12 assists per set.

Colorado State tallied its fourth and fifth consecutive victories against New Mexico and UNLV, respectively. The Rams will host San Diego State and the league-leading Bulldogs this weekend. CSU leads the Conference in hitting percentage (.284) and kills per set (13.60) in league games only, and have the reigning MW Defensive Player of the Week in Kirstie Hillyer, who tallied 13 total blocks against the Lobos and Rebels.

UNLV’s Mariena Hayden leads the nation with 76 total aces this season, setting the program career record with 119 this past weekend. Earlier in the year, the sophomore claimed the UNLV single-season record and is now tied for the MW single-season record (76). Hayden could jump into the top-five all-time in the Conference with 19 more career aces.

San José State head coach Jolene Shepardson is two victories away from career win No. 100, which she will look to tally this week as the Spartans visit Utah State and Boise State. Senior libero Luiza Andrade leads the MW with 0.64 service aces per set and 4.85 digs per set in Conference play.