This Week in WAC Volleyball 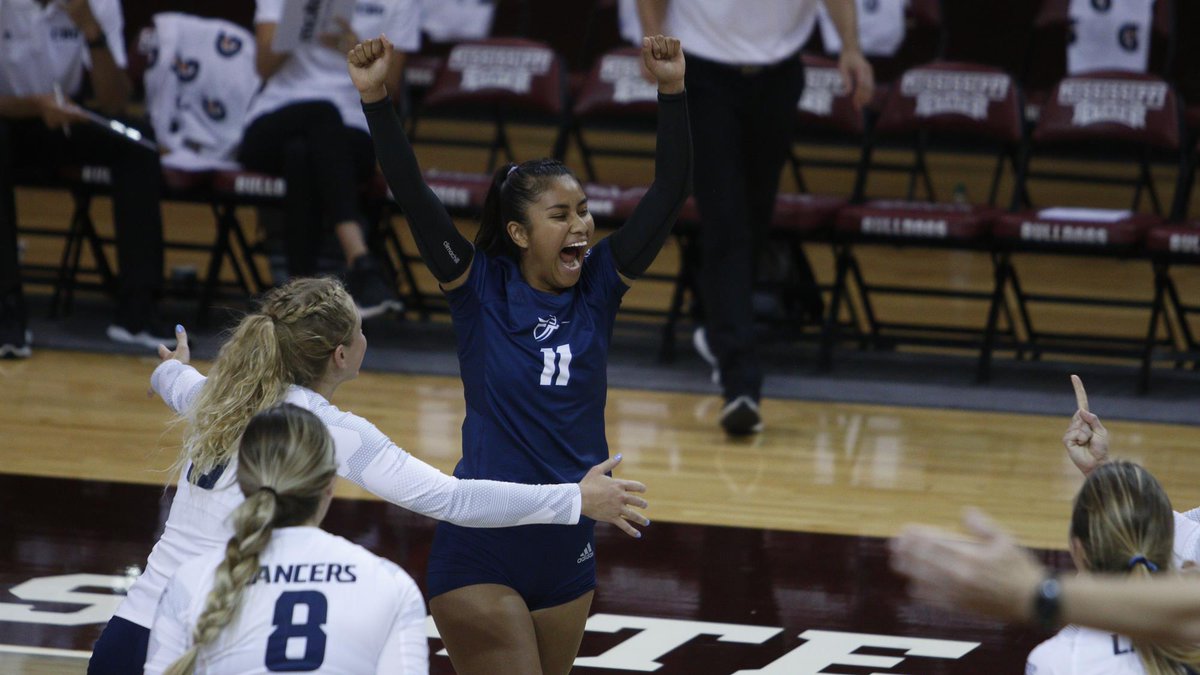 After posting a pair of home wins last week, NM State has now won 20 straight matches at the Pan American Center, dating back to Sept. 1, 2017, when the Aggies fell to No. 11 UCLA. NM State’s longest home winning streak took place from the 2005-07 seasons and lasted 29 matches.

With 235.5 total blocks, Utah Valley is one of the top blocking teams in the nation as it is currently ranked tied with Cleveland State for fifth in the country in that category. Utah Valley is two and a half blocks behind fourth-place UALR (238). Charlotte leads the nation with 269 blocks, while Wyoming ranks second (252) and Florida is third (249.5).

Chicago State’s Megan Klavitter, who earlier this season became the only active player in the WAC with 1,000 or more digs, became the program Division I career digs leader on Oct. 13 at Grand Canyon when she recorded her 1,315th dig. Klavitter now has 1,364 career digs and needs 52 to enter the WAC Top 10. Klavitter posted a career-high 38 digs against Brown on Sept. 14. She leads the WAC in digs per set (5.71) and total digs (491).

CSU Bakersfield redshirt freshman Brooke Boiseau recorded a .529 hitting percentage against Seattle U on Oct. 8. It tied CSUB’s Division I record for a five-set match.

On Oct. 11, Chicago State defeated Kansas City in five sets to pick up its first win over the ‘Roos in 14 years, snapping a 17-match losing streak. It marked the first victory for the Cougars in the series with since Oct. 22, 2004, when they earned a five-set win at the Swinney Recreation Center in Kansas City.

The loss to California Baptist on Oct. 13 was CSU Bakersfield’s first of the season at home. The ‘Runners were 8-0 prior to the defeat, the program’s best start at home in the school’s Division I history and the best since 1999. CSUB has now won 17 of its last 20 home matches dating back to Oct. 15, 2016. With at least three home matches remaining, CSUB already has eight wins in the Icardo Center. The most victories any CSUB team has recorded at home at the Division I level is nine (9-4, 2014).

Utah Valley head coach Sam Atoa recorded his 400th career victory on Oct. 6 at Grand Canyon. Atoa, who is currently in his 20th season as Utah Valley’s head coach, boasts a 401-232 career record (.633). The 2016 WAC Coach of the Year holds a 263-201 (.567) mark during his 16 seasons of coaching Utah Valley at the NCAA Division I level, as well as a 138-31 (.775) clip during his four seasons of coaching the Wolverines during the school’s junior college era. He is Utah Valley’s winningest active coach in any sports, as well as the school’s winningest coach at the NCAA Division I level.

Utah Valley has played a total of 10 five-set matches this season, including a string of nine out of 11 matches. The Wolverines hold a 4-6 record in five-set contests.

UTRGV’S OLIVEIRA RANKS IN TOP 10 FOR BLOCK ASSISTS VS. GCU

UT Rio Grande Valley’s Talita Oliveira posted a career-high nine blocks vs. Grand Canyon on Sept. 27. She had eight block assists, tying for the seventh-highest single-match total in program history. The nine total blocks were one shy of breaking into the top 10.