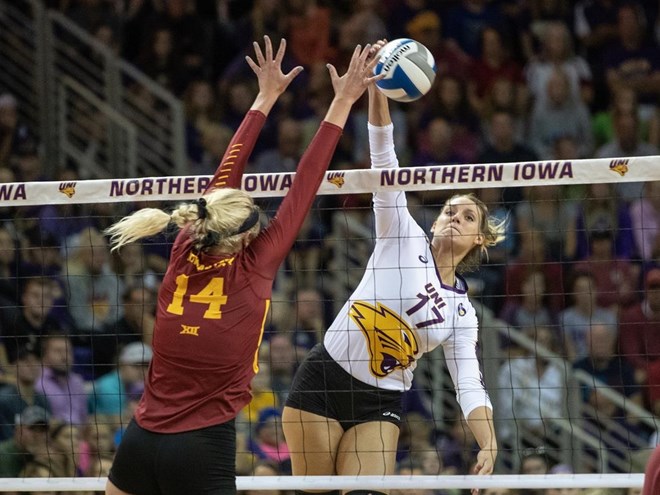 Leading #UNIFight to a 3-0 record while hitting .456 with 5.0 kills per set last week, Piper Thomas is the #MVCVB Player of the Week! pic.twitter.com/xQiO8aHxcR

Yavianliz Rosado, Sr., L, Bradley
Rosado averaged 7.43 digs per set in a pair of home victories as Bradley limited Indiana State and Evansville to a combined .163 hitting percentage to improve to 4-0 in MVC play and 14-2 overall.  She posted a career-best 35 digs in a four-set victory over Indiana State Friday and also had a pair of assists against the Sycamores.  The 35 digs tied for the fourth-best single match total in Bradley history and were the most by a Brave since Lauren Zerante had 36 digs in a five-set match at Northern Iowa on Nov. 22, 2013.  She capped the weekend with 17 digs and three assists in a sweep of Evansville Saturday, helping BU limit the Aces to a .143 hitting percentage.  In addition to helping the Braves to just the third 4-0 start to MVC play in school history, Rosado has helped Bradley to its longest win streak (8) since 2005 and the team’s 14 wins are the most since that same 2005 campaign (16).

With 7.43 digs per set last week to lead @BRADLEYvolley to another pair of wins, Yavianliz Rosado is the #MVCVB Defensive Player of the Week! pic.twitter.com/Oyr1Zdinyt

Chloe Rear, Fr., S, Missouri State
Missouri State freshman Chloe Rear handed out assists at an elite level last week, averaging 13.83 per set while guiding the Bears to a .231 hitting percentage. Rear’s assist average was a full assist per set ahead of this year’s NCAA leader, and her 51 assists on Friday against Southern Illinois represented the most for a Bear in a three-set match in the 25-point scoring era (since 2008). Rear added 10 digs against SIU for the double-double, and MSU hit .355 in the match. Monday at Loyola, the rookie had 32 assists, five digs and a block.

For the 3rd time in 4 weeks, the #MSUBears take home #MVCVB Freshman of the Week honors.

This week, Chloe Rear wins for the 2nd time this year.