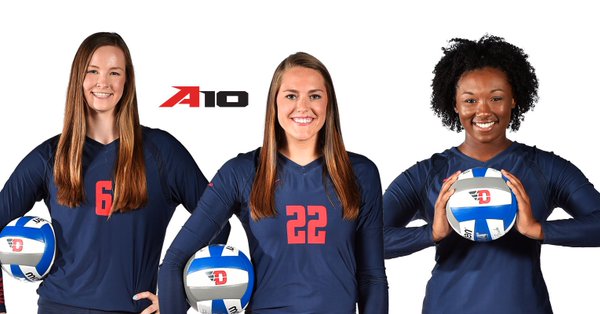 NEWPORT NEWS, Va.—Dayton senior Lauren Bruns was named the Atlantic 10 Conference Volleyball Player of the Week, while teammate senior Kendyll Brown earned Co-Defensive Player of the Week honors, sharing the award with La Salle senior Jensen Sharrits. Dayton freshman Amelia Moore was selected as the league’s Rookie of the Week. All awards were for matches played on the opening weekend Aug. 24-26.

Bruns averaged 4.36 kills per set over three wins this weekend for the Flyers. The outside hitter from Versailles, Ohio, tallied a career-high 24 kills to go with five digs and a service ace in a 3-1 win over Ball State. She also recorded double-digit kills (15) along with four blocks in a sweep of Marshall. For the week, she had an attack percentage of .451 and averaged 4.82 points per set.

Brown led the Flyers averaging 1.45 blocks per set in wins over Ball State, Marshall and South Alabama. In Saturday’s win over Ball State, the senior middle blocker from Mechanicsville, Va., tallied seven blocks to go with a career-high 17 kills. For the week, she also averaged 3.09 kills and 3.95 points per set.

Sharrits recorded 68 digs over three matches during the opening weekend for the Explorers. The senior libero from Concord Township, Ohio, recorded 16 digs in a 3-0 win over Morgan State on Friday. She followed with 21 and 31 digs, respectively, against Villanova and Delaware to close out the weekend. For the week, she averaged 6.80 digs per set and was named to the Delaware Classic All-Tournament team.

Jensen Sharrits, who was named to the Delaware Classic All-Tournament Team this past weekend, earned @atlantic10 Co-Defensive Player of the Week this afternoon! #LaSalleVB #GoExplorers 🔭🏐

Moore recorded three consecutive starts over her first weekend as a Flyer, leading UD to a 3-0 start to the season. The freshman middle blocker from Ocean Springs, Miss, recorded seven kills to go with six blocks in the season-opening win against Marshall. She followed that performance with three blocks, three digs and five kills against Ball State on Saturday. In Saturday’s nightcap against South Alabama, she equaled her career-high of seven kills and six blocks. For the week, she had an attack percentage of .417 and averaged 1.90 kills per set along with 1.50 blocks per set.