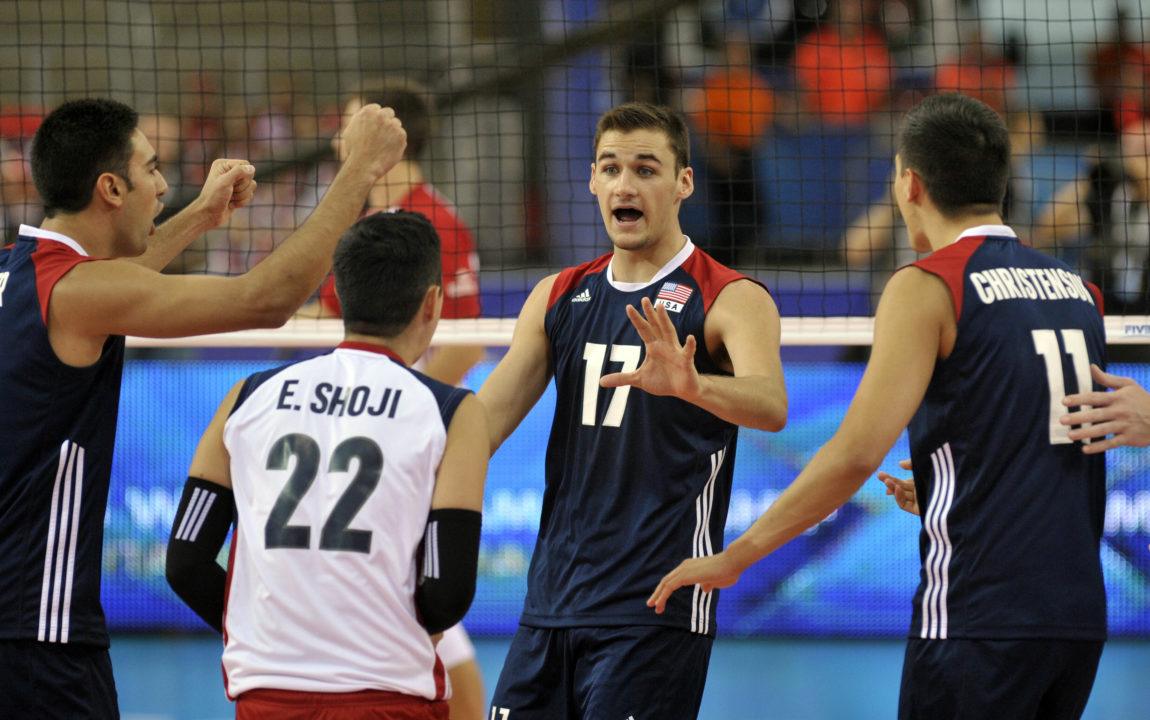 USA head coach John Speraw went away from TJ DeFalco at the end of the World League, but renewed his confidence in the young hitter on Friday. Archive Photo via FIVB

The Americans have started TJ DeFalco at outside hitter at their USA Volleyball Cup match against Brazil on Friday in Hoffman Estates, Illinois.

DeFalco, who is slated to begin his junior year at Long Beach State in a few weeks, started alongside Matt Anderson, Aaron Russell, Jeff Jendryk, Max Holt, and Kawika Shoji.

In the post-Olympic year, the American team has been in flux. Most of their Olympic stars have either retired or opted not to play at the World League after almost 2 years straight of play. That’s given the Americans the chance to expose some of their young players to the pressure cooker, and with Taylor Sander sitting out this week’s USA Volleyball Cup, there was an opening – and head coach John Speraw called upon DeFalco to fill it.

Like most of the young American team in Brazil at the World League, DeFalco was up-and-down, inconsistent, but showed flashes of brilliance. But at that World League tournament, Speraw ran away from DeFalco in crunch time. He barely saw the court and scored only 3 points in 4 matches in the Final 6 leg of the tournament. But now, Speraw has re-established DeFalco’s meteoric risehis opportunity to start alongside the country’s best is the next step in his development.

Speraw had options on Friday. The uber-athletic Ben Patch got a lot of run at the World League, and Matt Anderson, one of the best hitters in the world, can play at opposite or outside hitter. Speraw could have shifted him to the opposite and let the older Patch start at opposite instead of DeFalco at outside hitter. This configuration, however, gives Speraw more depth at both positions – when Anderson isn’t at the opposite, Speraw is left with very few options off the bench if Patch struggles

The announcers in the match dropped a rumor that DeFalco was considering forgoing his last two years at Long Beach State in order to turn pro. That rumor could not be substantiated, but the defending AVCA Collegiate Player of the Year is at least on his way to becoming a fixture on the U.S. team.