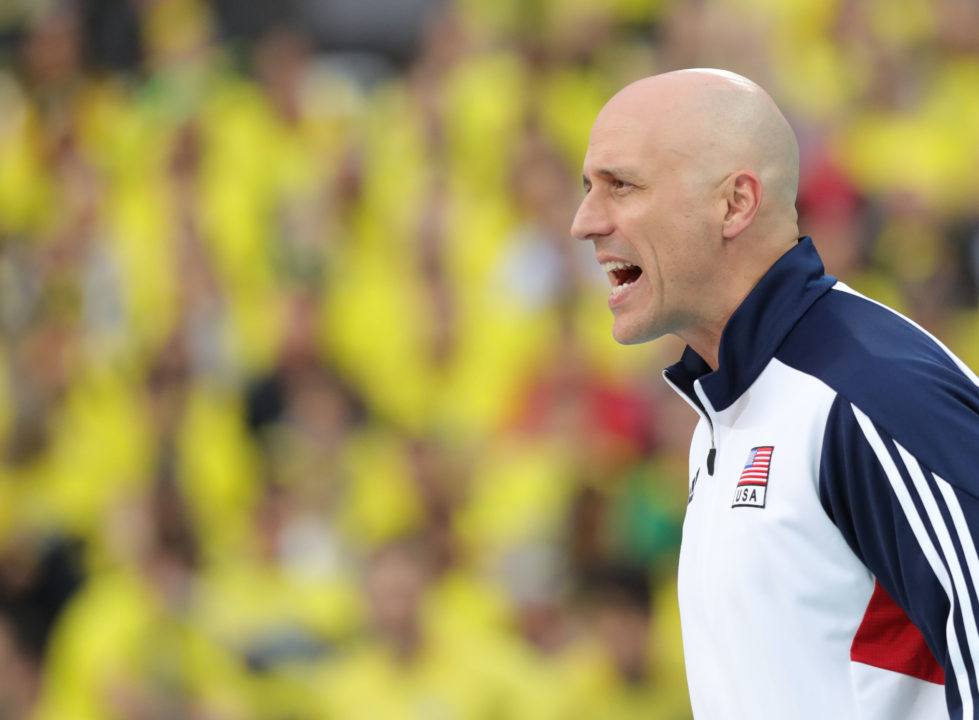 The return of Olympians Matt Anderson, Alex Holt, and Aaron Russel were not enough for Team USA to fend off Brazil in the first game of the USA Volleyball Cup. Archive Photo via FIVB

When was the last time American fans got to see Matt Anderson, Alex Holt and Aaron Russel back in uniform for Team USA? After more than an year, the Olympians were back in action to the delight of excited fans at Illinois for the first match of the USA Volleyball Cup.

Also, but very unfortunately, when was the last time American fans saw their team gift the opponents with 11 service errors in a single set? The same faults that troubled the team in the 2017 FIVB World League came back to hunt Coach Speraw’s tem. Ditto, the first set of the contest  was one to forget.  Don’t let the 25-21 score fool you, had
Brazil played with more effort on second chance balls, the set would have had been over much more quickly. It was as if Brazil was playing by mercy rules and wanted to give Team USA a chance. Also, just like the American team that traveled to Brazil last week, Renan Dal Zotto‘s team was only at half strength, playing without its stars Wallace de Sousa, Lucas Saatkamp, and Ricardo Lucarelli.

The only highlights of the first set was was seeing old players back in action after a year long hiatus.  And of course, seeing Anderson and Bruno having a stare down at the net after an Anderson kill, while not ideal, shows the grit and leadership that the American team was lacking.

The second set started out much better for Team USA as they got up to an early 3-0 lead. Brazil was quick to react, though, and tied the game at 4-4. Both teams alternated leads of no more than two points, as USA cut down on service errors, and Brazil improved its efficiency on second chance points. Team USA even tried using a four man reception line to improve its flawed passing game.

In the late set, Brazil got up to a comfortable 22-19 lead, which was quickly neutralized to a 22-22 tie by the American team after a rare display of strong servicing and Brazilian  attack mistakes. But, even after their service got them withing striking distance to close the set, mistakes from the service line by Erik Shoji and Garret Muagututia allowed Brazil to go up on a  24-23 lead, which they quickly used to close the set after a Renan attack.

The third set was an absolute thriller, and probably the first set in these three games so far to hold up to the standards of USA x Brazil volleyball. Ben Patch, Dan Mcdonnel and Thomas Jaeschke started the set for Matt Anderson, Alex Holt, and TJ DeFalco. Brazil got up to a quick 5-2 lead on American service errors. USA rallied back to a 9-9 tie, just as  Aaron Russel gave the public a scare after a hard fall. Thankfully, nothing happened to him, who is just getting back from injury.

Ben patch and Thomas Jaeschke played very well in the set, breathing life into a listless American squad. It was a very close game until the 20 point line. USA took a rare 21-18 point lead after a Bruno service mistake. Brazil rallied back to 23-23 after a Mauricio Borges back row attack. Brazil then missed two services, giving USA four set points. Strong Brazilian play from Mauricio Borges, with two back row attacks, led Team USA to waste these set points and having to see Mauricio Borges close the game at 29-27 with an ace.

Matt Anderson had a good return, with seven attack points on thirteen tries in two sets of play. Aaron Russel had eight attack points in 18 tries and did what he could to try to hold his own in the passing lanes. All in all, Team USA’s strong points could be summed up in the plays of its middle blockers, who allowed the team to keep within striking distance in sets 2 and 3. Its low points were the 23 service mistakes for the game and its low passing efficiency, at only 48%, compared to Brazil’s 60%.

For the Brazilian side, Bruno once again showed why he is one of the best setters in the world, always finding the right player at the right time for the right action. Mauricio Borges and Renan led the team with 16 and 15 points apiece. Brazil was able to come out big and close the game when it needed to, even without three important starters, and having to save four set points in the road to a clean three set sweep.